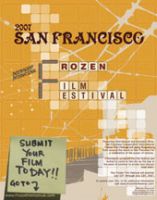 At the Castro this weekend, the organists are warming up -- it's time for the Silent Movie Festival. This year's lineup features a series of Hal Roach comedies, a Cecil B. DeMille over-the-top epic, and a documentary about silent movie restoration (which also has organ accompaniment, in case you were wondering.)

Meanwhile, just down the street at the Roxie, you've got the Frozen Film Festival. The Frozen Film Fest features all types of indie movies (animated, docs, and international features) and has an eclectic array of Bay Area documentaries, foreign films, and some other cool-looking movies too. They get their name from our famously-chilly summertime weather, which is when they hold the event. Movies screening include edgy animation, a bunch of documentaries about various Bay Area related issues (among the issues covered: recycling, the AIDS marathon, our local bluegrass scene, the UC Berkeley extension school debate, and violence in Richmond), and some intriguing other movies (a 1966 horror/girl band movie, and a movie hosted by Leonard Nimoy about space).

Both festivals run Friday to Sunday -- so make sure you check 'em both out.

Update: In fact, so many film fests, we left one out! There's a launch party tonight for the SF Shorts film festival next month (Aug. 8-11). It's at the Victoria (16th and Mission) at 8 p.m., and features short films from the festival, free beer, and the band Persephone's Bees.

Over in the East Bay, the city of Oakland's filed suit against Waste Management, the garbage company that's locked out the local workers for 11 days now, and is letting trash pile up

—
Frozen Silent: Your Film Fest Options This Weekend
Share this