We have no idea. All we know is that tourists do what they do, because they are told to and some of it looks like it actually is fun. In the name of science, tourists and good nature or something, an adventure was taken on for you: The Bay Quackers tour! 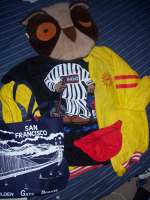 After buying a smoking hot red fanny pack for $1.99 at the Goodwill, and from one of those stores on “Hey, all these stores look the same” Fisherman Wharf’s Jefferson street, a $.99 blindingly yellow polyurethane Fisherman's Wharf jacket and an Alcatraz t-shirt in which the wearer's head is the head of the Alcatraz cartoon character (how clever!), we were ready. Amidst the tourists (not only tourists, but Fisherman's Wharf tourists), we totally stuck out, and that is no easy feat.

Everybody welcome new contributor SFist Jessica, who bravely ventures where no local dares -- the world of the San Francisco tourist.

It's the end of days, lakes are on fire, it's raining frogs, and zombies roam. Dirty toughguys Otis and Dale Savage make a living as bounty hunters -- folks pay them to track

Breaking the law, breaking the law We -ist folks love us some crime, and no misdemeanor is too petty for a post on any of our sites. This week, join us for a