Phillyist notes a fistfight between local pols that leaves one man down for the count. Jehovah's Witnesses get a Philly contributor out of bed, things get a little geeky with a film festival and geeky gets taken to a whole new galaxy when they talk with the Dragon Queen of the Dark Kingdom.

Shanghaiist gets all excited this week over a new nightclub in the city unfortunately named "Snatch" and Mike Tyson is scheduled to cut the ribbon. The Chinese divorce, it turns out, and the government has embarked on a hopscotch promotion program. Also, Senator Chuck Schumer is a blithering idiot.

Gothamist is around to see the bouncer Littlejohn get indicted for murder this week. In, uh, lighter news, elephants parade into Manhattan for the circus and new public bathrooms are planned. The Knicks win a few which is sufficient cause for a pizza partay. 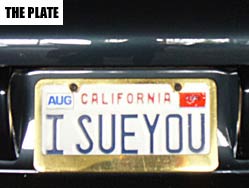 LAist saw Thank You For Smoking this week and immediately set about guessing the venues. They rocked with the Orb and Angie Dickenson (not the same event) and came across some jerk with the vanity plate "I SUEYOU". Jerk.

Chicagoist has some high profile guests coming to town including Jen Aniston and Conan. Everybody loves vinyl, diners and, uh, tomatoes and there was a primary in the city this week which Chicagoist had covered before and after.

Austinist podcasts SXSW and then chronicles the madcap journey of an artist who stowed away on a plane to make the festival. The Brief History of the Dead is also reviewed. Don't act drunk in Texas, btw.

Bostonist squares off against Bill Gates over criticism of MIT and call it like it is: He's an asshole. A local grocery store also gets the treatment as does a Yankee hat. Bronson's gone from the Red Sox and Vinatieri might be leaving the Pats. Also, party.

DCist reports that the 50 existing states aren't that into the idea of DC as the 51st. The Washington Post blog fiasco can't go uncommented on, of course, and DCist obliges. Ben Domenech resigns later in the week. The site's logo also experiences the highest form of flattery.

Seattlest needs a drink. Pillowman's in town as is Scoobie and the gang. Ichiro's on his way back to join the zany Mariners after winning the WBC. Also, some asshole gave his dog Mooie an acid bath.

Houstonist has got feral hog problems over here, longhorn issues over there. That's not even mentioning the donkeys. Also two postal workers were held up for their unis and a guy charged with raping another man at swordpoint was found not guilty.

SFist reports that Tomkat was in town to do a Yahoo interview and their readers honor and respect the perfectly normal lovebirds. They also did an interview of their own with Wim Wenders. "Kumquat" is more than just a funny thing to call a small person and a fake Digg entry draws a crowd. Downtown people are protesting.

On Saturday, the Cardinal absolutely handled number two seed Oklahoma 88-74 behind a Walton-like performance from 6-4 junior center Brooke Smith. Smith poured in 35 points on 14 of 16 shooting. She also

One of the great charms of dog-friendly San Francisco is the numerous places where dogs are allowed off-leash. Legally. The city lists two dozen parks around town. Sadly, there are many places remaining