The hydrants don't hook up to the hoses, there's fighting over Treasure Island, there's corruption in the Housing Authority -- and what are we all still talking about? This afternoon's Cow Hollow ski jump! The tempers are as hot as the ice is cool, with the homeowners agripe that the ski jump organizers still don't have enough insurance to cover any damage done to homes along the route, "some of which are worth over $10 million." (If your home is worth $10 million, can't you just tap into that equity line and pay for any damage done yourself?) 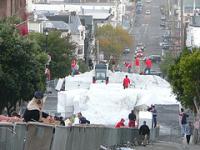 There's also speculation that part of the reason why Mayor Gavin Newsom has been pushing the event so hard is that he might have some marshmallows of his own bobbing in this cup of hot cocoa, as it turns out his Plumpjack Group is a sponsor of the event and some friends of his came up with the idea in the first place. Protective Peter Ragone fires back, "I'm sure the mayor doesn't even know that PlumpJack is a sponsor." Though hey -- if you want to pick up some Moseley gear, they sell it at the Plumpjack Group's Balboa Cafe.

Well, temperatures today are expected to be in the 80s, so we'll see if the snow holds up. Meanwhile, they're putting bales of hay along Green Street to try and keep skiers from flying off the ramp and into the blameless 22 Fillmore bus.

Thanks to Bill Jennings for the awesome Flickr shots -- Check out his Jonny Moseleys! Let us know if you've got pics to share too!

We've finally recovered from our hangovers and pulled our underwear off the ceiling fan, but the memories of last Friday's WebZine 2005 party we sponsored remain. Belated and massive thanks to our intrepid

But there's no way we're missing out on this season of "Alias." The last season blew our minds what with the zombies and the glowing orb and the HOLY CRAP! finale ending. And