The company that invented the motto “Move fast and break things” certainly managed to break things pretty good during the 2016 election, promoting Russian troll-farm fake news content to as many as 126 million Americans during the election cycle (and pocketing a paltry $100,000 in the process). Facebook now vows they’ll be much more transparent about political advertising going forward, as today they get set to testify before Congress about the Russian meddling that took place on their platform (livestream here).

But as Facebook gets ready to testify, BuzzFeed News has acquired Facebook’s pitch to political advertisers during the election cycle. We see in the pitch that Facebook’s vaunted “algorithm culture” is in fact shockingly stupid and simplistic with regards to political identification, and breaks every American down into one of “14 independent segments” drawn up by the kind of tech folk who think mini cupcakes are a standard form of caloric measurement. 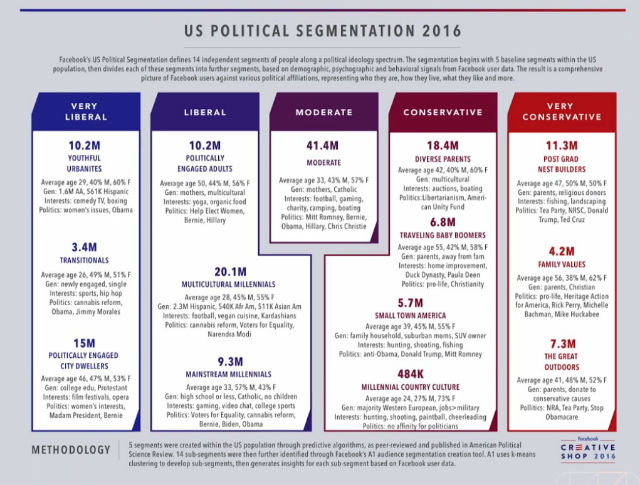 As we see from the pilfered PowerPoint slide above, the interests Facebook assigns are all straight from the old blog Stuff White People Like. Citing interests like ‘yoga,’ ‘Kardashians,’ and ‘SUV owner,’ Facebook thinks we all belong in one of 14 categories of the ad-industry-friendly silos like ‘Multicultural Millennials,’ ‘Traveling Baby Boomers,’ and ‘Post Grad Nest Builders.’

Interestingly, the “Youthful Urbanites” demographic lists ‘Boxing’ as an interest. I’m frankly skeptical that there is currently much interest in boxing.

At the expense of sounding redundant, these segments do not represent all of Facebook-using America. These segments represent middle- and upper-class Caucasian Facebook-using America. It’s not unreasonable to conclude that a white bias in forming these tools makes the tools better at engaging white people, at the expense of engaging communities of color. That the tools were developed by a not particularly diverse workforce may make them more powerful at reaching white people, with a tech wealth disposition inherently baked into the (mini cup) cake.

“We typically help marketers across all verticals understand audiences this way, and we briefly used this framework to help inform how a small number of marketers built their campaigns,” a Facebook spokesperson told BuzzFeed News. The spokesperson said the pitch is no longer used because it was discarded as part of a "regular refresh," and that “these segments are no longer available.”

This is, of course, separate from the more granular targeting of segments like “Jew Hater” and “Nazi,” which Facebook did indeed allow until ProPublica called them on it last month.

And this seems symptomatic of how Facebook is missing the point. For all its self-professed targeted demographic wizardry, Facebook doesn’t seem to have a clue how dishonest players are gaming their platform in ways that are light years beyond Facebook’s safe, namby-pamby suggested parameters.

Zuckerberg and company seem stuck in a cushy Silicon Valley mindset that assigns actual reality to the milk-and-cookies stereotypes that investors and advertisers are comfortable with. The monster they’ve created is being used for far more sinister purposes than what falls within purview of the company advertising parameters. Facebook remains flat-footed and clumsy in response to troll accounts that literally call for U.S. violence, and internationally, use of Facebook to cause real-life mass violence.

Related: Facebook Wouldn't Be As Big Of A Problem For The News If People Actually Clicked And Read Stories

Four longshoremen in Oakland are taking their accusations of racism to court, reports CBS. They're alleging that the Pacific Maritime Association and SSA Marine are doing nothing to address numerous alleged instances of

After shutting its doors in August to make way for a much publicized mixed-use development, the Goodwill store on South Van Ness became rubble over the weekend, and many people documented it on