The Tubbs Fire  which stands as the most deadly, as it is responsible for 18 of those 35 deaths  crossed over from Sonoma into Napa County and is now edging its way into Calistoga, which was put under mandatory evacuation late Thursday, as the LA Times reported. The fire jumped Highway 29 on Thursday, and the Chronicle describes Calistoga now as a "ghost town." Cal Fire's latest incident report on the Central LNU Complex fires places the Tubbs Fire at 34,770 acres consumed, and is 25% contained. The Nuns Fire, the largest of the Central LNU Complex fires, has consumed 44,381 acres and is only 5% contained. Keep in mind that yesterday, the Nuns Fire combined with the Norbbom Fire and two other smaller fires, and has burned its way over the ridge into Napa and Mount Veeder.

In what they're calling the Southern LNU Complex fires, Cal Fire reports that the Atlas Fire has burned through 48,228 acres, but is 27% contained. The Partrick Fire, essentially now connected to the Nuns Fire, is 12,379 acres large and is 18% contained. 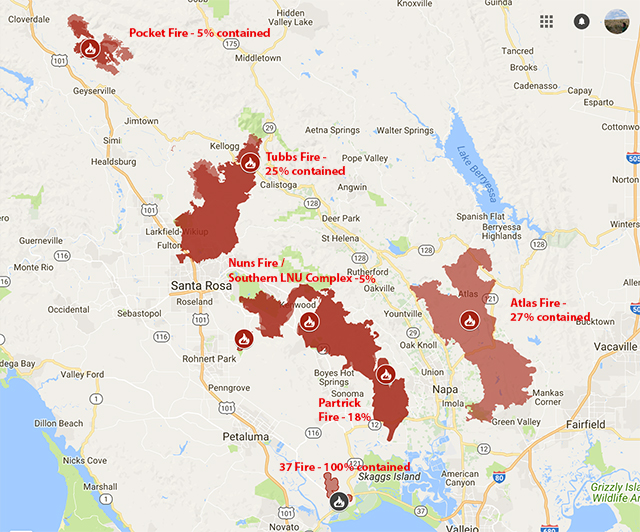 There are a few more developments regarding missing persons as well, as 745 of the 1,100 people reported missing has been found, according to the Chron. Deputy Brandon Jones echoed his sentiments from yesterday morning, when he told the Chron that "[a] lot of these things resolve themselves." Commenting on the newly updated numbers, he said, "A lot of these people have been safe and sound this whole time. It was just finding where they were." The Chron's report goes on to explain that of the 25,000 displaced residents, 3,172 are staying in designated shelters. Cell tower and internet infrastructure has also been impacted by the fire, resulting in a lot of people trying to get in contact with missing family members.

The City of Santa Rosa shared a satellite photo similar to the one shown in the New York Times report from yesterday on the destroyed Coffey Park neighborhood. In the photo, the red coloring indicates healthy, unburned plant matter, while the grey coloring indicates burned areas.

Residents can assess neighborhood damage online. Recent aerial images of fire damage in Santa Rosa have been posted on Map Box, which residents can view of their neighborhood. Please note: areas that show red indicate the presence of vegetation, NOT fire. https://t.co/hqXElkJEoU pic.twitter.com/gqI8BCzZYK

Residents can review satellite imagery of their neighborhoods via the MapBox website, though be warned, the site itself has been throwing errors as more and more people try to look up their homes.

For those of us farther south, keep in mind that strong winds will likely carry more smoke our way. The air quality is forecast to drop to "Unhealthy" levels, according to the AirNow.gov website. The National Weather Service also shared (via Twitter) a forecast for how the winds are set to blow through Saturday.

Keep an eye out for each other, and remember: if you're looking for a particulate mask/respirator, make sure it's rated N-95. This rating means that the mask filters out 95% of airborne particulates, the bare minimum for conditions like these.

*This post has been updated to reflect the rising death toll.

All previous coverage of the North Bay Wildfires on SFist.

Map via Google. Labels via SFist.

Just a few days after a 4.4 magnitude earthquake hit the San Jose area, a second cluster of quakes has rattled the South Bay, the United States Geological Survey reported this morning.