It's truly the end of an era: AOL, now under the banner of the unfortunately named Oath over at Verizon, is killing off its signature Instant Messenger service effective December 15. AIM, as it's been known lo these 20 years, may be the only thing any of us even use AOL for anymore (confession: I still talk almost daily with one of my oldest friends on there, sadface), and it may be that you used to use AIM all the time but stopped a good eight or ten years ago because of all the other technologies and services (texting, Facebook) that came along to supersede it. But as the internet grew into the monster it's become over these last two decades, AIM was always there, the single through-line for some of us back to the early days of Hotmail, Geocities, and chat rooms.

As The Verge notes, AOL signaled that the death of AIM may be coming when it killed off access from third-party chat clients in March, and perhaps this isn't going to be a big deal because "It’s hard to imagine that many people are still using AIM." But like I said, I AM!

AIM is the private, anachronistic place I go to talk to this one friend, whom I've known since were 16, and it's primarily how we maintained a friendship during years when we lived in different cities, working jobs we hated, idly exchanging a joke, a detail about the night before, or a Weird Science reference, in the midst of a dull day. We didn't need to talk on the phone or write too many emails because we had AIM. When we lived together for a brief period in the last decade, we still chatted on AIM from across the apartment sometimes so we didn't have to yell or leave our rooms. After cellphones came along, I'll still occasionally get texts from her saying "Why aren't you online?!?" And by "online" she meant "on AIM." 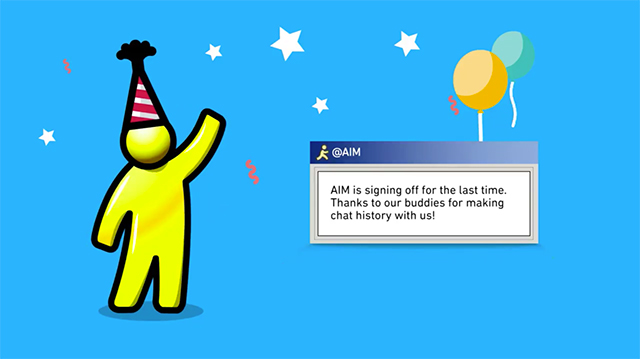 On Wired, David Pierce waxes nostalgic about how "everyone was on AIM" at a certain point in the late 90's, and it didn't matter who you were.


For all we like to worry about how much of life happens on the internet now, a lot of life happened on AIM. Friendships and relationships started, ended, and often took place mostly in a chat window. It always started the same way: one person waiting for the other's name to pop up on their Buddy List, then trying to wait at least a few seconds before chatting them so as not to seem desperate. Long before group texts, we planned life on AIM.

Though there were other ways to chat online, and Yahoo had a Messenger too (which it killed off last year) AIM was arguably the birthplace of LOL, BRB, and countless abbreviations that are now permanent pieces of our lexicon. And it predated so many of the things we now take for granted about the social web. As Wired notes, "Custom Buddy Icons were the proto-profile picture. Colorful, ASCII art-rich profiles were the original MySpace page. AIM did voice chat before Skype, file-sharing before Dropbox."

But, of course, even by writing this and seeming sad about it I'm dating myself. Anyone who who came of age in the post-AOL era likely had many other ways to communicate with their friends, and of course, I use many other apps and modes of communication now.

But for this one friend and I  and perhaps for thousands (hundreds?) of other relationships like ours that leaned heavily on desktop chat and have endured for 20 years or more  saying goodbye to AIM will be like saying goodbye to our youth. It's been a constant, even if we also talk on Facebook Messenger and via text now. It's where we've pasted innumerable links, fretted over innumerable flings, and bemoaned several presidential administrations.

This is going to be tough.

Police are seeking a man who allegedly creeped on a woman inside a Bay Area Target, taking photos under her dress when she bent over as she shopped. According to a press release

—
Goodbye, Old Friend: AOL Is Killing Off AIM After 20 Years
Share this