Former Oakland Mayor Jean Quan and her husband Dr. Floyd Huen, along with partner Ryan Hudson of The Apothecarium, will have to look elsewhere with their hopes to open a medical marijuana dispensary after last night's Board of Supervisors meeting. The meeting was a late and emotional one, as SF Weekly reports, with marijuana advocates facing off with Outer Sunset residents and marijuana foes, and the Board ultimately voting 9 to 2 against approving what would be a third location for the swanky pot emporium after a recent (and hard-won) expansion to the Marina.

Only Supervisors Malia Cohen and Jeff Sheehy voted in favor of the dispensary, which had been the target of a negative lobbying campaign by the somewhat shadowy Pacific Justice Institute  a conservative religious group based in Sacramento that previously filed a lawsuit over the Dolores Park pissoir.

Quan's dispensary had seemed ready to roll after getting easy approval by the Planning Commission in July, with plans to provide Cantonese speakers to help the Chinese-American population in the Outer Sunset better understand the benefits of medical cannabis.

In a weird twist, the Chronicle kinda jumped the gun on their report of the meeting, which assumed the dispensary would be approved unanimously, and published and tweeted a story saying so before the vote was even taken. Not sure what happened there, but the story has since been corrected. 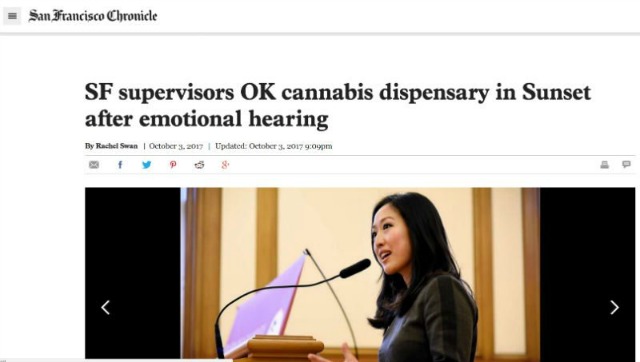 As the Examiner reports, the Pacific Justice Institute was hired by the Ark of Hope Preschool, which argued during the hearing that the dispensary was too close to it and a church. Huen, speaking the Examiner, blamed the anti-LGBT group for "whipping up" Sunset residents to oppose the dispensary.

An attorney for the group spoke at the hearing saying "In the eyes of federal law, the Apothecarium is no different than the street corner crack dealer."

Supervisor Katy Tang spoke out against the group but still said that she had heard from "an overwhelming majority of people who live in the Sunset" that they opposed this dispensary.

This was among the last dispensaries in the pipeline to receive a hearing ahead of a 45-day moratorium that the supervisors approved ahead of the coming full legalization of recreational pot, which takes effect January 1.

Screenshot of the original story via Joe Kukura.

It seems like Congress is now also criticizing Twitter for its seeming inaction with regards to the racism running rampant on its platform. According to Adweek, Representatives Bonnie Watson Coleman (D-NJ) and Emanuel

A post shared by Darwin Bell (@darwinbell) on Oct 1, 2017 at 4:00pm PDT Your Instagram story can now contain a poll. [Ad Week] Safety advocates oppose federal move to clear the