Pretty much all Bay Area critter populations have swollen with this year’s wetter and warmer weather, and we’re seeing flocks of wild parrots, whales, and rats of unusual sizes. But that also includes the least welcome, most intrusive little bastards of the animal kingdom  the barbaric bandit raccoons. The annual early autumn San Francisco raccoon menace is often responsible for dog assaults, attacks on people, and the impudent louts making themselves at home in kitchens or garages, and this year has already produced raccoons so large people thought they were kangaroos. With the completely uncalled-for and indefensible holiday International Raccoon Appreciation Day coming up this weekend, SFist spoke to some Bay Area raccoon experts on what to expect with the coming raccoon scourge.

take a little time out of your day to watch this 🐾 pic.twitter.com/2jhIdGU07B https://t.co/stsJhsbETr

Critter Twitter is exploding with raccoon content these days, much of which presents the unmannerly mongrels as cute or uplifting. Do not be deceived! These nuisance beasts are not your dog’s friend, as the above propaganda would indicate. They’re coming to steal your Purina, knock out your electricity, and prance right into your kitchen with that ‘What are you lookin’ at?’ expression on their insolent little faces.

“We are seeing an increase in calls,” said David Martins, owner of critter removal service Wildlife Detectives, whose humane, no-kill practices have earned the recommendations of Humane Societies across northern California. “Since there isn’t any scientific organization doing formal studies of the raccoon population in the Bay Area, it is difficult to estimate if the population is going up.”

While anecdotal, this sentiment is also backed by SFist’s good friend Deb Campbell, spokesperson for San Francisco Animal Care and Control. (SFACC can answer all your raccoon questions at their Pet Pride Day this Sunday.) “There are certainly many raccoons in the city,” Campbell told SFist. “Right now raccoons are more visible  this applies to all types of wildlife  as the babies born in the spring are now out with their parents, foraging for food.” 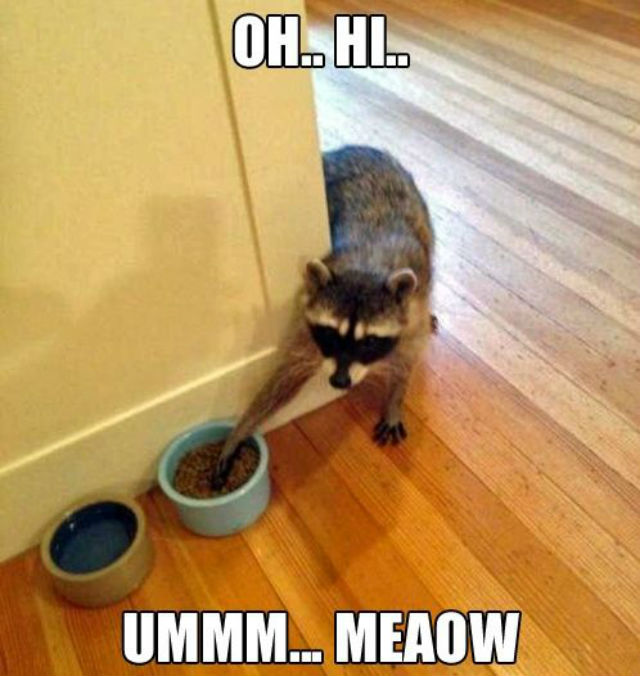 But they’re also creating racket and having their raccoon parties on roofs and in basements, which the SFACC says can be prevented. “Evaluate the environment and see if there’s anything that could be attracting raccoons,” Campbell said. “Water sources, pets fed outside, bird feeders, open trash or green bins  all are enticing to raccoons. If there’s no food, water or shelter available, they’ll move along.”

Try telling that to your dog! Dogs are often victims of raccoon attacks, and SFACC can provide some help in that department as well. “We give out flashing collar charms for dogs to wear at night,” Campbell told SFist. “Wildlife is usually wary of things that they don’t understand and will stay away. A water pistol will usually annoy a raccoon enough to send them on their way. A loud noise should frighten them away. Keeping dogs on leash is the best way to avoid all sorts of danger, including scuffles with wildlife.”

“Raccoons are very opportunistic,” she added, but insisted they do not carry rabies. “Just because [raccoons] are visible during daylight hours does not mean that they have rabies, a common assumption. Rabies is rare in San Francisco, and in the past several decades has only been found in bats.”

these raccoons are so smart ???? pic.twitter.com/iDMQdvUJXE

These churlish little animals are out in force right now because the mommas are essentially teaching the babies ‘how to be raccoons’. “It is during the late summer and early fall months that [mother raccoons] begin to take them out into the world and teach them where to find the available food sources in their territory,” Wildlife Detectives’ Martins told SFist. “This is when many people experience their new sod or lawns being dug up. What is happening is that the mother raccoon is teaching her babies how to find grubs, which is a source of food for them. A heavily watered lawn will have grubs, and that is what the raccoons are after. It is believed that they can actually hear the grub activity under the lawn.”

They are crafty critters! That can certainly be a problem if they’ve infiltrated your home. “Shelter can be unsecured deck space under your home, open crawl spaces, broken vent covers or other entry points in your home,” Martins said. “When a raccoon enters any of these areas, the odds are great that she is seeking a den site to give birth to her young. This is why trapping raccoons is not the solution. If you trap a mother raccoon, the babies are left behind. California state law also requires that any trapped wildlife must be released within a 150 yards or killed. Since we do not believe in killing healthy wild animals, our approach is one of peaceful coexistence and prevention.”

Reports of a kangaroo on I-580 were false. Said marsupial was actually an enormous raccoon. Raccoon was removed by CHP Motor Officer Coffman

That said, dead raccoons are what SF Animal Care and Control mostly deals with. “We interact with raccoons daily  but most are not living,” Campbell told SFist. “Our agency picks up two or three dead raccoons a day, most hit by cars.”

Related: Who Was This Man With A Pet Raccoon On Telegraph Hill In The 1950's?