Elektra: I once caught Ben Stiller's A Night at the Museum and thought: what a tragedy. Obviously, I wasn't the only one: The production crew at SF Opera decided to use the same conceit of exhibits in a museum taking life in the middle of the night, to feature their own Greek tragedy, Elektra, as composed by Richard Strauss. It was a stroke of genius and a triumphant success.

Elektra was the daughter of Agamemnon, who upon his return from the Trojan war, unfortunately came to realize he had married an axe murderer. His wife Klytemnestra and his cousin Aegisth, who had shacked up while he was away, offed him in his bath (it is not brought up in the libretto, but Agamemnon also had sacrificed his and Klyte's daughter Iphigenia to the gods on his way out, and came back from Troy with his lover Cassandra, stuff Klytemnestra may have found objectionable). Anyhow, Elektra wants revenge for daddy's literal blood bath. She hesitates between waiting for her brother Orest's return to do the deed, or convincing her sister Chrysotemis to do it with her.

Strauss's opera, which opened in Dresden in 1909, is thoroughly modern and rarely performed. The last run at SF Opera was twenty years ago (by far the longest gap in between productions ever here). It is relatively short, clocking at 1h45 but super intense. Alex Ross describes the music in the Rest is Noise as "an onslaught of dissonance and neurosis... The music repeatedly trembles on the edge of what would come to be called atonality; the far-flung chords that merely brush against each other in Salome now clash in sustained skirmishes." So I watched a couple YouTube productions to get a better feel for the piece. It could not prepare me for the actual performance. The sheer force of the 100 musicians delivered a visceral sensory experience that laptop speakers totally failed. The YouTube versions did not have that witty, resourceful and amazing set and staging. And these online streams did not have Christine Goerke, an Elektra for the ages. 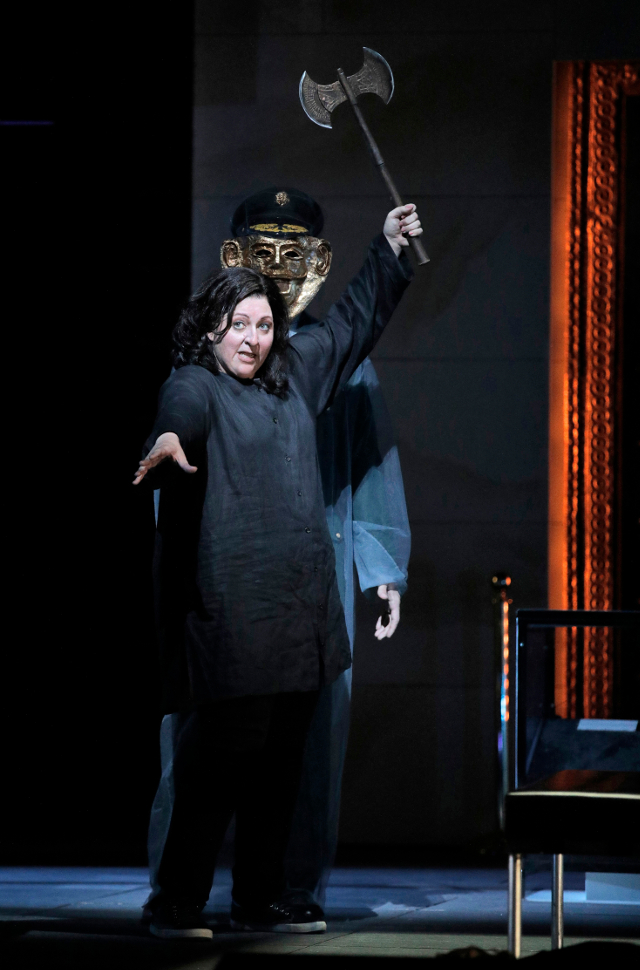 Let's start with her: Goerke is on stage for the whole show. Actually, she is on stage even before it starts, as part of a pantomime of visitors checking out an antiquity display. The whole opera splits into a series of scenes where she interacts with her sister, her mother, her brother, her father-in-law, each a rather harrowing confrontation. Her vocal lines are hard edged and broken. Goerke perfectly jumped through the vocal calisthenics, her voice strong enough to cut through the thick orchestral textures. She'd hold a long note and make it blossom and bloom. Her yell of "Agamemnon" gave goosebumps. Most amazingly, she fully embodied her character. Her face, her acting, her hands would be so expressive even when she would be silent. I can't recall a more complete performance by a singer.

The set, by Boris Kudlicka, plays off the cliche that museum equals beige marble slabs. It is modern, sleek and evocative, and has quite a few Jobsians "one more things." A dream sequence opens up like a drawer to show Agamemnon's wake. In other drawers, moments of family life are embodied by a bedroom or a 50's styled kitchen, the domestic quotidian of the objects contrasting with the family drama on stage. The Queen's entrance is almost magical, stepping out of a display case where only a mannequin had been thus far. The costumes wisely avoid (mostly) the Greek togas, and vary between today's dress, some 50s costumes, and Billy Idol for Aegisth.

The orchestra, led by Henrik Nánási, mastered the trickiness of the score. In ever changing orchestrations, the sound would be weaved by a set of instruments then handed off to another, all in a smooth and translucent miracle. The score is decidedly Wagnerian, Elektra could be inserted as an extra act in the middle of the Ring cycle and aside from the mix up of Greek and Norse mythology, none would be the wiser. Nánási brought it to life with in-your-face directness, here a whiff of a macabre waltz, here a swaying barcarolle rhythm, here even a bit of levity during a short harmonic relief when a messenger requests a horse. For Klytemnestra's long monologue, the orchestra gurgles, and simmers and bubbles up, and during Aegisth's murder, we hear the shrieking strings that Bernard Herrman would later recycle in the Psycho soundtrack.

The rest of the singers are uniformly excellent, with some luxury casting in Adrianne Pieczonka as Chrystothemis, Michaela Martens as Klytemnestra and Alfred Walker as Orest in the main roles and no weak link in the supporting roles. After the performance, there was a palpable enthusiasm from the audience, secure in the knowledge it had viewed a one-of-a-kind performance, and which didn't seem to want to go home but bask a little longer in the afterglow of an amazing performance.

Turandot: The night before, I watched a highly satisfying Turandot, the 1926 Chinese-inspired warhorse by Puccini which had opened the 2017-18 SF Opera season. It premiered almost 20 years after Elektra, but it's safe to say that Puccini went in a much more conservative musical direction: It's grounded in a cozy tonal world, and in a lyrical serpentine melodic language. Unlike Elektra, its namesake heroine is not the main character, and she does not sing until well into the second act. The main role falls on tenor Brian Jagde's solid shoulder.

I recall Brian during a 2009 Merola concert singing an excerpt of Bohème where he pierced the audience's heart with a desperate call for Mimi. It's both a testament to Jagde's voice and to Puccini's keen ability to mushily manipulate your tear ducts. While Jagde has tremendously grown as a singer since, he has built a cottage industry in Puccini roles, singing Tosca and Butterfly on this stage. He brought back that Merola memory in his first invocation for Turandot! Yep, here comes that bright and assured tenor that knives through the orchestra to hit you right in the solar plexus. In the month of the tenth anniversary of Luciano Pavarotti's death, Jagde delivered a magnificent homage to the Italian legend with a perfect Nessun Dorma.

Calaf is the warm blooded lover who challenges Turandot, the icy queen, to woe her. For this first run, Martina Serafin took up that part (there will be another diva, Nina Stemme, in the second run in November/December). I found her voice too shrieky and cold, but she is supposed to be a frigid sociopath who gets off chopping off the heads of her pretenders, so maybe it is the appropriate casting. An Adler fellow, Toni Marie Palmertree, took up the role of Liu, the generous maid who gives her life to save Calaf's, and she is definitely ready for the big leagues. The trio of Joo Won Kang (a leader among equals), Julius Ahn and Joel Sorensen provided comic relief as Ping, Pang and Pong, but they backed up with serious lyricism. 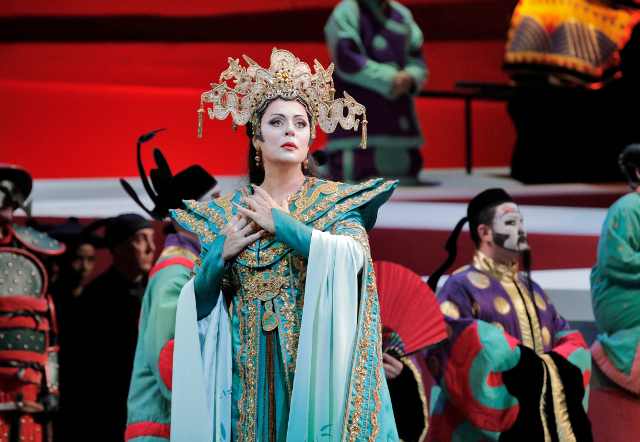 Martina Serafin in the beautiful costumes by Ian Falconer.

Like Elektra, it is scored for a lush and richly orchestrated ensemble and it is impressive to see the same SF Opera orchestra fare so beautifully in back-to-back performances in such contrasting styles. Maestro Luisotti, in his final year-slash-victory lap as music director, coaxed vivid textures and a well paced flow out of his band. He pushed them one step short of obscuring his singers, with whom he symbiotically breathed. Luisotti's last conducting gig as music director opens this week-end with Traviata. We'll look for his returns in the future as an invited conductor, he has a few scheduled.

The production recycles the old, well worn sets from David Hockney, who is turning 80 this year. They are both whimsical and practical, and place the action squarely in a mythical land that still clearly depicts the story. It also allows the chorus to efficiently move in and out; and what a treat when they are on. Hats off to the chorus director, Ian Robertson.

Christine Goerke is actually not an axe murderer, but a rich and complex Elektra