The first Folsom Street Fair, which was then called “Megahood,” was held on Sunday Sept 23, 1984. Dianne Feinstein was mayor, Mondale’s Democratic Convention had just blown through town, and the “gay cancer” that had stirred genuine fears of a government conspiracy against the LGBT population had recently been dubbed AIDS and connected to sexual activity. It was against this backdrop that Feinstein — who had just refused to march in the Pride parade — was waging an “urban renewal” campaign intended to evict a large number of SoMa’s bathhouses and gay bars and replace them with high-rises, on the claim that SoMa was a mess of urban blight. (By the following month, Feinstein and the Board of Supervisors would be ordering all the bathhouses closed for public health reasons.) Hence the festival’s early name Megahood, a signifier that the neighborhood was noteworthy, thriving, and not a blighted dump. 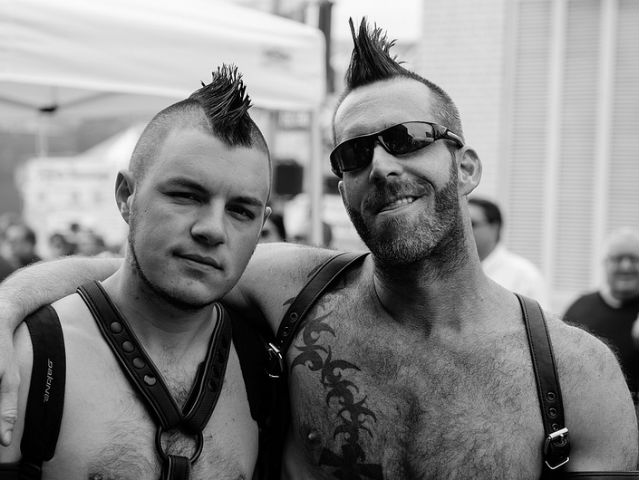 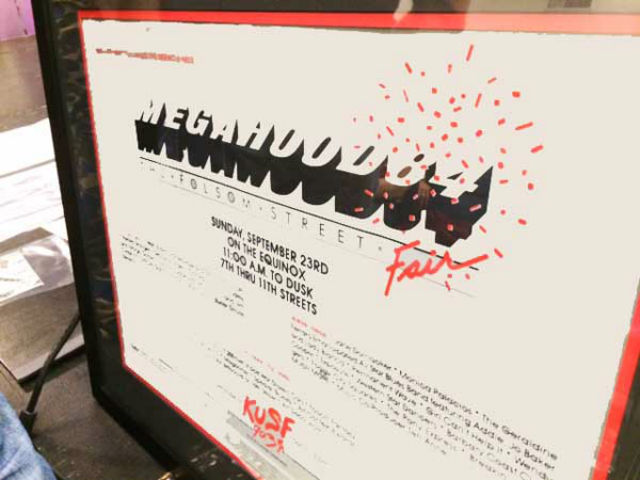 If you really squint at this this photo of the last remaining original flyer for Megahood, whose subheader does use the phrase “Folsom Street Fair,” you see that one of the main stage performers was Marga Gomez — still one of our favorite standup comedians — and Leila and The Snakes’ keyboardist Jane Dornacker. The biggest attraction at the fair was a 200-foot lineup of vintage muscle cars, and the 1984 fair hosted 37 booths total. Some of those booths were for organizations whose name you’ll recognize today, like Frameline, the SF AIDS Foundation, the Shanti Project, and the San Francisco SPCA. 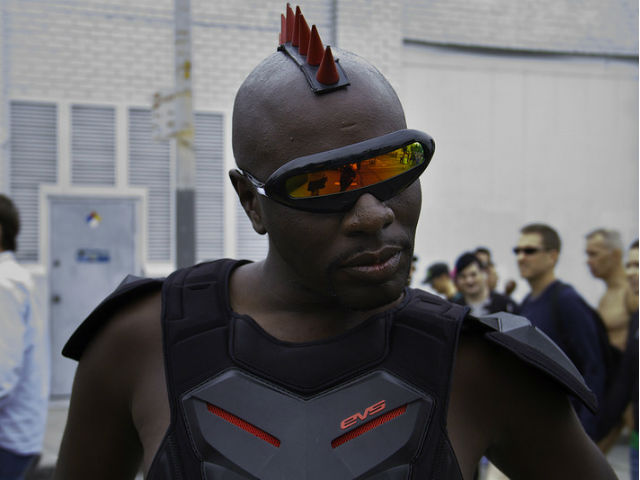 Still, the 1984 fair covered the same map as it does today. “Megahood spanned the area that to this day marks the boundaries of the fair: from 12th Street to 7th Street between Howard and Harrison, with Folsom at the center,” writes the Fair’s co-founder Kathleen Connell in her own history of the Folsom Street Fair, noting that the scene was “caught by the early morning street art painting done by pupils of the Bessie Carmichael school while watched over by nuns.”

Connell founded the fair in 1984 with Michael Valerio, a South of Market leatherman whose day job was as an affordable housing realtor at the still-existing nonprofit TODCO. Inspired by the Castro Street Fair, they worked with Harry Britt (Harvey Milk’s appointed replacement on the Board of Supervisors) on street closures and logistics, and did not intend for the fair to be a kink event. But the character of SoMa's nightlife venues, naturally, made it a kink event.


This year saw the first-ever Folsom Street Fair, held September 23 over several blocks of leather’s Main Street USA. Crowds were bigger than most observers expected, and curiously mixed. There was certainly more leather in evidence than at this year’s Castro Street Fair — and maybe more straights as well. The Fair was, after all, a neighborhood effort, not just a leather festival.

As one spokeswoman [Ed: This was probably Kathleen Connell] noted, Folsom Street and the South of Market is a neighborhood of minorities, the elderly, and gay men — so on the same block, visitors could shop at a booth of a novelty emporium selling ‘naughty’ party items, talk seriously about SM to members of the Janus Society, and view artwork in crayon by children from a local grade school. ‘Only in San Francisco,’ as the saying goes.

There were fewer politicians, craftsmen, organization booths, and stops for food-and-beer than at the city’s more established street fairs—which left more elbowroom for the crowd, most of whom came mainly to look at each other anyway. The weather was terrific, spirits were high, and leather was everywhere, gleaming in the sunlight.

This writeup likely comes from Drummer founder and editor Dr. Jack Fritscher, who recalled kinkier and more explicit details a 2011 piece from the Bay Area Reporter insert BAR Tab that still exists thanks to the Wayback Machine. “The crowd at that first Folsom Fair was pretty much several hundred SoMa leathermen sticking their skeptical heads out of the bars to jaywalk, drink, and piss-play with attitude,” Fritscher wrote. “Almost immediately, jitters turned to enthusiasm.” 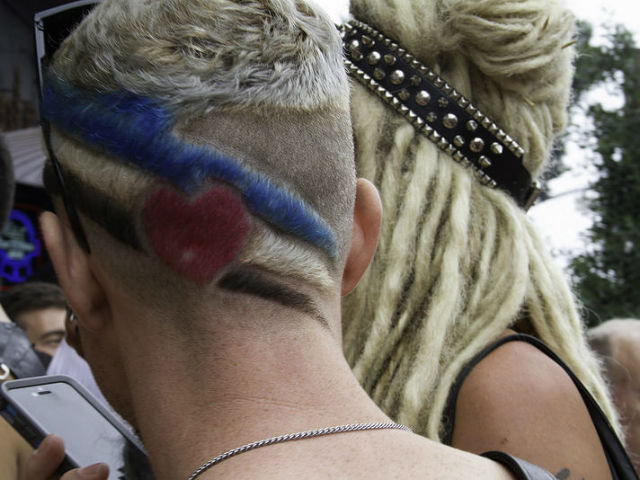 It dawns upon SFist while writing this that many of you readers were not even alive yet for the first ever Folsom Street Fair, 33 years ago. (Don’t feel bad, SFist wasn’t born until 2004.) But it’s even more striking that the fundamental conflict that spawned the Folsom Street Fair — a subculture trying to maintain its presence and identity in the face of rapid SoMa development — continues to play out today. That underscores the enduring importance of the Folsom Street Fair. There is great power in the fact that at least for one day, a sexual subculture gets to be ‘the top’ and thoroughly dominate the South of Market neighborhood.

The SF Mayor's Office of Civic Engagement and Immigrant Affairs is offering to cover the cost of renewal application fees for all Deferred Action for Childhood Arrivals (DACA) recipients in the city, ahead

On August 31, the Trump Administration ordered the closing of San Francisco's Russian Consulate, as well as three others in the US. Immediately following that news, a mysterious plume of smoke emanated from