A few more details have trickled out in the ongoing investigation into the Saturday murder of 44-year-old Anthony Torres, a.k.a. Bubbles, in the Tenderloin. Police have been insisting since Sunday that despite Bubbles's gender non-conforming mode of dress and notoriously confrontational persona, they don't believe that the shooting was a hate crime. However, as the Chronicle reports, friends and witnesses believe otherwise, and a couple of details have emerged that suggest Bubbles may have been trying to enter a strip club from which the alleged killer emerged.

We learned yesterday that the shooting took place on Larkin Street at Myrtle, across the street from the New Century strip club, and though the SFPD has not confirmed this, witnesses have said that a man came out of the club, chased Torres across the street, and shot him following an argument.

Another potentially telling detail: Torres had posted to Facebook the night of his death that he planned to go to some strip clubs in his neighborhood to "promote a swimsuit he had designed." Friend and attorney Jim Reilly, who has been speaking to media on Torres's behalf since Sunday, insists to the Chronicle that Torres did not enter the New Century Saturday morning just before 3 a.m., when he was shot, but it's unclear how he knows that.

District 6 Supervisor Jane Kim tells KQED that she's calling for an investigation into New Century, and allegations that they permit drug dealing inside the premises, with the possible consequence of revoking their business license.

Bubbles was well known for making his/her presence known and stirring controversy in the neighborhood, and at parties around town. As friend Marke B. wrote in a brief obit, "There was barely a venue Bubbles hadn’t been 86ed from... but it was usually for something spectacular, and even those kicking her out often ended up bragging about their Bubbles encounter."

And despite multiple reports describing Bubbles as a trans person, Bubbles was more accurately a gender-non-conforming trans character that was "put on" by a gay man, Torres, a few times a week  kind of as an act of living performance art.

Nonetheless, Torres was no stranger to hate, having already thought about leaving SF after a gay-bashing incident in 2008, and posting the photo below of another bashing incident in February of this year. "Shit that happens to you when you dress like a lady even though you are a man in San Francisco in 2017," he wrote. 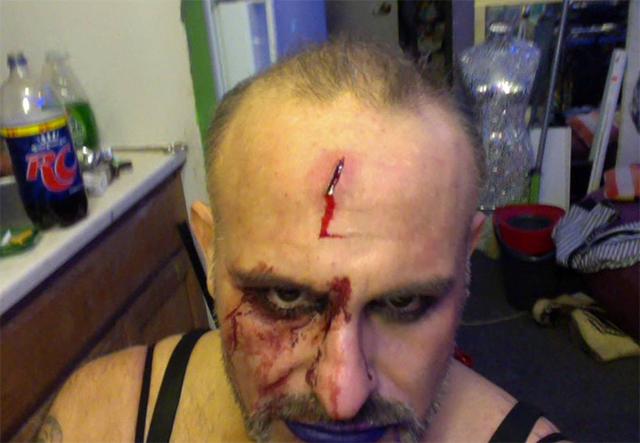 Trans activist Mia Satya points to the fact that police and prosecutors often avoid seeking hate crime enhancements because they can be difficult to prove  and she tells the Chron that a case involving on an assault on her in the Mission several years ago had to be refiled at her insistence, and the perpetrators ended up taking a plea deal in which they admitted the attack was motivated by hate.

As Reilly tells the Chronicle this week, "He was so creatively and flamboyantly himself. I think the level of rage that occurred and what went down leaves no other conclusion [other than a hate crime] to be drawn in my mind."

A memorial fund to pay for a "funeral and memorial service he deserves" is about halfway to its $10,000 goal. Also, a special memorial vigil and party is happening Wednesday, September 13, at F8 on Folsom, hosted by Housepitality, at whose parties Bubbles was a constant guest. Another memorial party, which had been planned as Bubbles's going away party as he planned a move to Berlin, is set for September 29 at The Eagle.

We'll update you as the investigation continues.

Wunderkind electric car brand Tesla probably thought they were doing something nice this weekend when they boosted the battery power capacity for their drivers escaping the perilous path of Hurricane Irma. Owners of

27-year-old Swedish vlogger PewDiePie, who for reasons I can't even wrap my head around made $15 million last year for essentially rambling like a crazy person and taking video of himself playing video

—
New Details In Death Of Bubbles May Point To Hate Crime, Police Still Deny Hate Was Motive
Share this