Making an obligatory stop for a photo op in the nexus of once-upon-a-time and still-sorta-kinda Hippieville, the Upper Haight, here is VW's concept car version of their upcoming minibus throwback, which also just made an appearance at the Concours d'Elegance in Pebble Beach over the weekend. Volkswagen has batted around ideas for updates on their iconic minibus over the years, but now they've made it official that this model, dubbed the I.D. Buzz, will go into production in 2022, as Road & Track reports. The six-seater car offers a spacious interior the size of a decent SUV while offering the more modest size of a compact cargo van  and it's fully electric, with Level 3 autonomous control, meaning it can steer, stop, and accelerate on its own in certain conditions, but requires a driver in the driver's seat.

A Reddit user posted the photo above of the car showing up in the Haight on Monday, complete with its ambient body lighting, and judging from the photo and video below, the German carmaker has been taking full advantage of this California trip for some advance marketing materials  the original VW bus being as deeply associated as it is with hippies, and thus, San Francisco.

As Hoodline notes, the ID Buzz was photographed parked next to a shiny orange vintage VW bus, obviously as part of a photo or video shoot with the Haight-Ashbury as a backdrop.

Via the video, we see the new brand of hip San Franciscan VW driver, complete with man bun, beard, surfboard, record player, and corporate job, is depicted in the video... and yeah. I guess that's who they see buying this thing. 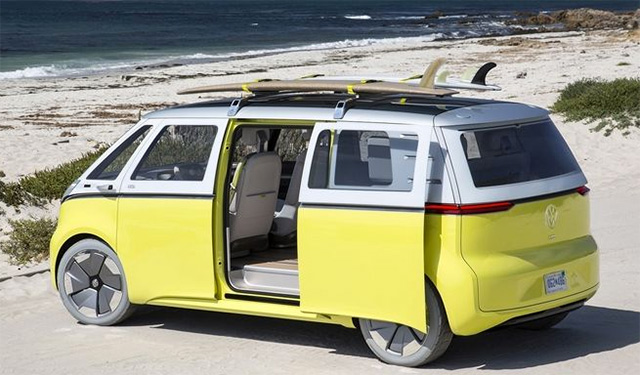 As you can see, the steering wheel is some sort of newfangled version of a steering wheel that retracts when not in use, and the car has various bang and whistles, like what appears to be a bluetooth speaker stereo thing that pulls out like a boombox.

Also, the front seats turn around so you can face people in the backseat, though presumably this is not an option while in motion  though this could be anticipating a time when the car goes fully autonomous (and won't be recommended for the easily carsick). 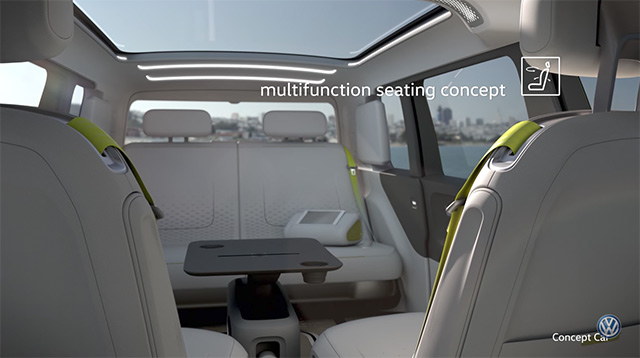 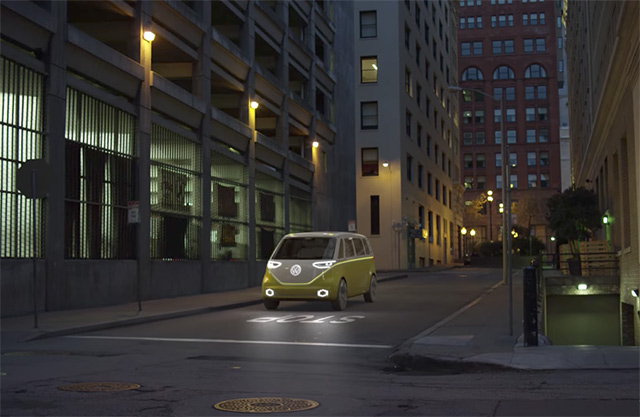 The ID Buzz had previously been shown at auto shows in Detroit and Geneva, and following that, Volkswagen CEO Dr. Herbert Diess says there was an outpouring of requests from customers to actually make this car.

"The Microbus has long been part of the California lifestyle," Diess said in a release. "Now we're bringing it back by reinventing it as an electric vehicle."

VW will also be making a commercial version called the ID CARGO, which will be a zero-emission delivery truck option for businesses. And going into production first will be the ID hatchback, arriving in 2020, and previously shown here by Road & Track last September. That car features the same ambient lights along the front, steering column, and semi-autonomous functions, as well as being all-electric with a 370-mile range on one charge  it's basically their new-century answer to the Beetle, and they think it can go fully autonomous by 2025.

Related: Video: Go Inside A 1967 Tour Bus As It Gawks At Haight Street Hippies

Traffic was predicted in connection with yesterday's eclipse in spots all over the country, but a ton of East Bay residents traveling on Highway 24 through Lafayette decided just to pull over and