It's a question many newcomers have when July and August arrive in San Francisco and they're wondering where to find the sun. Newscasts tell you that it's out there, somewhere, in parts of the Bay Area you can not see out your window. But where's an actual destination that is not just somebody's backyard in Pleasanton where it'd be worth driving on a foggy Saturday in the city? We have a few thoughts.

ATHERTON/PALO ALTO
Whether you're trying to be creepy and hit on Stanford undergrads at one of downtown Palo Alto's lively bars, or just looking for a weekend escape in tony Atherton, this is a convenient part of the Peninsula that's both reliably warm and sunny in the summer and well populated with food and drink options. Palo Alto's got a newish hotel owned by Oracle billionaire Larry Ellison that boasts the Bay Area's first location of Nobu, and the food scene in general has improved in Palo Alto with the openings of locations of Pizzeria Delfina and Tacolicious  the former has a huge and very popular patio, too. Airbnbs might be frowned upon and few in the wealthy enclave of Atherton, but you'll still find some, some of them with lovely pools. And you'll get to feel rich for a weekend just by being there, and it's just a barely 45-minute drive from SF without traffic.  Jay Barmann 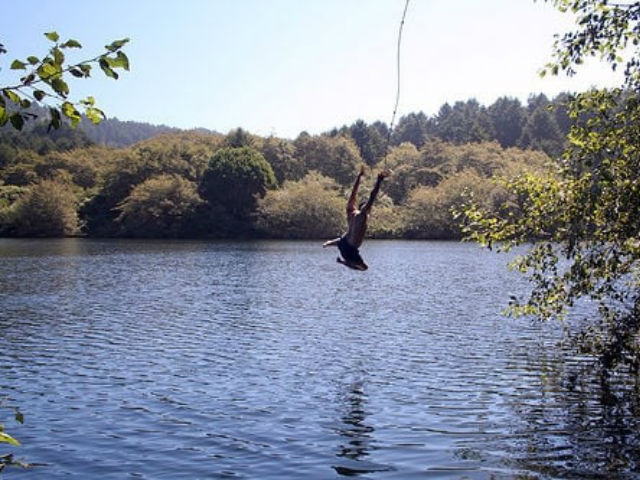 BASS LAKE
The California quirk of notorious hippie town Bolinas is legendary (and the urban legend that the locals tear down road signs to keep tourists out is indeed true). But that doesn’t mean they’re anti-fun up Bolinas way, as the above-seen rope swing is regularly replaced by local swingers while park rangers are legally obliged to keep cutting it down. A day trip to that Bass Lake rope swing destination delivers all the special magic of Marin  the pastoral, windy two-lane blacktop drive, gorgeous mountain and forest scenery, magnificent Pacific Ocean panoramas, and a delightfully brief hiking path that takes you right to the lake. Detailed directions for the three mile-hike on the Palomarin Trailhead are available courtesy the Marin Independent Journal. — Joe Kukura
Mesa Road, Bolinas 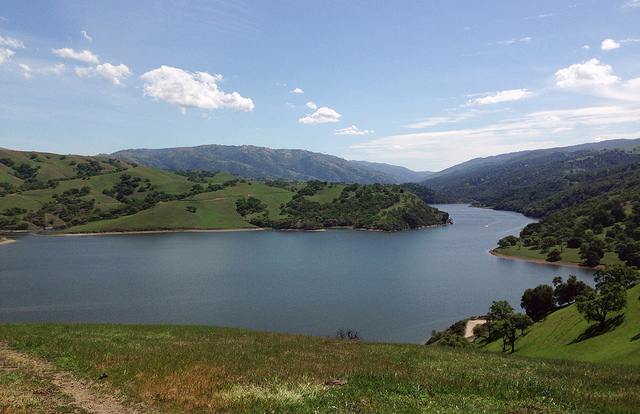 LAKE DEL VALLE
Lake Del Valle is a giant, rather remote reservoir that was made by filling in a canyon just south of Livermore, and it's one of the most easily accessible and predictably hot spots to sit by some water that you'll find anywhere around the Bay Area. There are pretty oak trees covering the hills surrounding it, and it's big enough that you're almost guaranteed to find a spot to throw down a blanket that won't be anywhere near anyone else  and this is the first summer in a while that it's close to full. It's dog-friendly too (though this summer they've detected blue-green algae in the lake that's toxic to them), and if you get too hot in the sun, you can just hop back in the car and taste some wine in Livermore's small but up-and-coming wine region over the hill. Directions and details here.  Jay Barmann 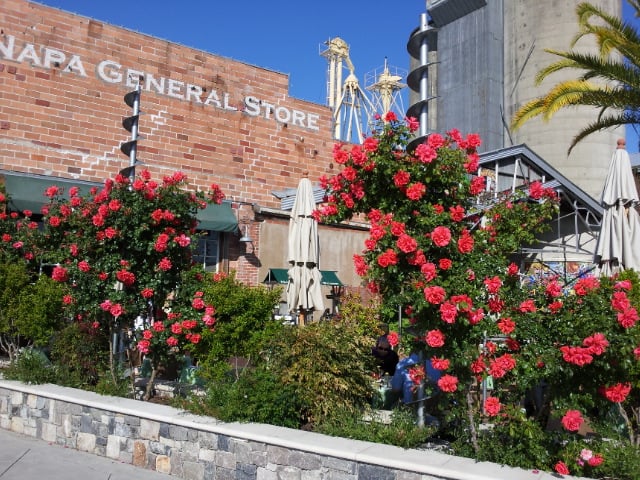 DOWNTOWN NAPA
Lost in the love of Napa as a winery and restaurant destination is the fact that its easily walkable downtown area is just quaint AF. There are a number of really iconic small businesses within walking distance of one another  they’ve got a Gott’s Roadside, the famed Oxbow Public Market, the Bauer-approved Miminashi, and of course the station for the Napa Wine Train which has had some unfortunate recent coverage. But the sidewalks of the town show off some otherworldly foliage and flora any time of year, and right now the cacti are are flowering in ways that are off the charts. — Joe Kukura 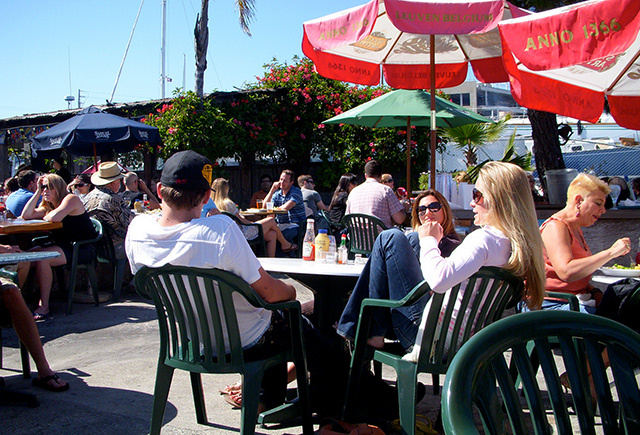 POTRERO HILL/MISSION BAY
It seems like every SF-set TV show and movie shoots in Potrero Hill at some point — and with its amazing views of downtown, picturesque houses, and weather that's more reliably warm and sunny than other parts of the city, it only makes sense. While less picturesque, Mission Bay is also known for its temperate weather, as any sunburned AT&T Park-goer can ruefully confirm. While neither fully lend themselves to full-on nature adventures like hiking or picnics, both offer a wealth of outdoor dining options  check out Mission Rock Resort (I chose their dock for my wedding due to its reliably clear skies!) or The Ramp on any summer weekend. There's something about drinking a beer while seated outside that just says summer, right? — Eve Batey 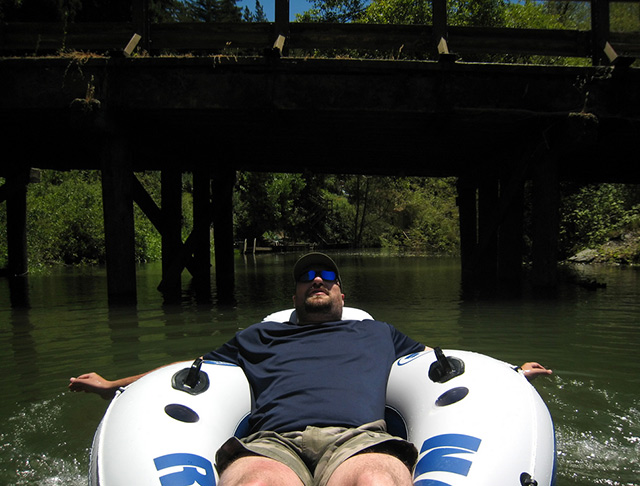 RUSSIAN RIVER
It's both an excellent destination for a day of wine tasting (Pinots are in abundance), and a summery place for a weekend getaway anytime between May and October. Guerneville is the gay and lesbian destination, with the Rainbow Cattle Company bar the center of most weekend shenanigans, though there are plenty of families that flock there too for tubing on the river, and restaurants like Boon Eat + Drink, Seaside Metal, and Dick Blomster's Korean Diner keep city folk satisfied. There are also the quaint river towns of Monte Rio and Rio Nido where there are vacation rentals aplenty, if what you're looking for is more of a quiet house-party vibe. Just be warned that given how close these towns are to the ocean, they get a bit chilly at night.  Jay Barmann 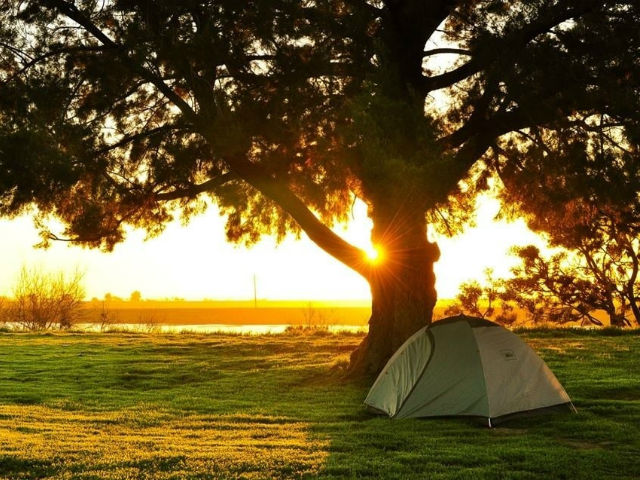 SACRAMENTO-SAN JOAQUIN RIVER DELTA
Some of us happen to like things like wearing shorts and experiencing 100-degree heat, because we are transplants and these things remind us of childhood summers past. The Sacramento-San Joaquin River Delta, or simply “The Delta”, is vastly more beautiful than the garbage views you see along the the 680, and the area allows for old-school camping with RV hook-ups and coin-op showers. (Check out a guide to all the weird bars around The Delta here.) And of course mad respect to the little river town of Isleton, where the website and signage of Bob’s Bait Shop both declare Bob “The MasterBaiter”. — Joe Kukura
North of Antioch 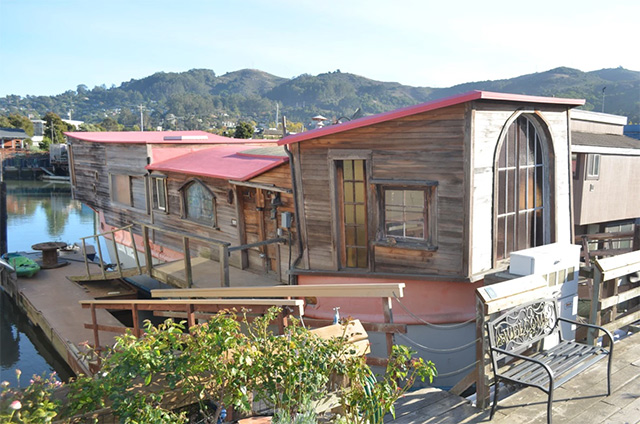 SAUSALITO/TIBURON
While these coastal Marin County towns are definite tourist spots, that doesn't mean you can't use them to escape Fogust (or Fogtember, or Fogtober, or... you get it). Located just on the other side of the Golden Gate Bridge, it might be faster some days to get to Sausalito than it is to move a couple blocks in downtown traffic. And once you're there, you're likely in for clear and bright skies and temperatures ten-plus degrees higher than those in SF. We're partial to the bike ride from the bridge to Sausalito, but the ferry to Tiburon is a lot of fun, too, and Sam's Anchor Cafe is a swell place to waste an afternoon. — Eve Batey 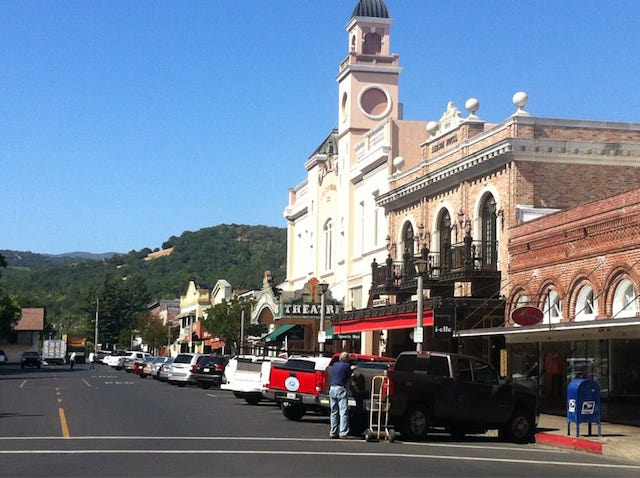 SONOMA/HEALDSBURG
Obviously the wine country has the perfectly sunny weather needed to grow good wine grapes, but there's a fantastic array of Vitamin D absorbing to be had up there that doesn't involve stained lips and bad decisions. Sonoma Plaza is the best place to get started  tons of great shops line the historic square, and genuinely world-class casual dining spots are too numerous to mention. (But The Girl and the Fig is where everyone should  and does  go.) Here's a self-guided tour for history buffs interested in getting to know the plaza's fascinating past, including the mission and former Barracks. Book a weekend getaway in Healdsburg because it's just as nice and not as crowded as Sonoma or Napa. The Hotel Healdsburg, Madrona Manor, and the H2 Hotel are all worth the cash. Healdsburg's Noble Folk Ice Cream and Pie Bar is worth the drive alone. - Beth Spotswood 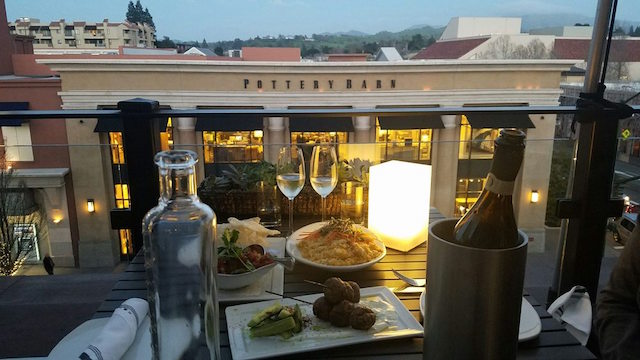 WALNUT CREEK
If you can weather the soccer moms covered in waterfall cardigans and Michael Kors hobo bags, you can count on the weather in Walnut Creek. For those who don't go to suburbs, Walnut Creek is what happens if you keep driving east from Berkeley. It's full of air-conditioned high-end malls and status SUVs. Which is to say, Walnut Creek is heavenly. The town is full of lovely parks and playgrounds, not to mention a nice array of outdoor mid-level dining options like Va de Vie and Rooftop. If you're seeking sun akin to the way a Real Housewife of Orange County seeks sun (and there is not one thing wrong with that,) head to Walnut Creek  and don't forget your Tory Burch aviators and best frenemy. - Beth Spotswood

Image: Carlos A. via Yelp

A mentally ill man who was put on a 5150 involuntary psychiatric hold two months previously is now in custody after allegedly murdering his mother, engaging in a 15-hour standoff with police Sunday

A bit of previously unreleased tape has just surfaced, seemingly from an archive of Allen Ginsberg recordings, that features Ginsberg and Bob Dylan talking backstage on December 11, 1965 in San Francisco, and

—
The 10 Most Reliably Sunny Places Around The Bay
Share this