The SFMTA can't just shut down one entire Muni subway for an entire month just to test five new trains. Or can it?

Streetsblog brings us word of the San Francisco Municipal Transit Authority's planned closure of the Muni underground between the Embarcadero and West Portal for entire weekends and weekday nights (after 9:30) over the next four weeks. Streetsblog also reports that some transit types are really pissed off about this.

The closures are part of an apparently necessary process to test five new light-rail vehicles  these, which we've been promised for a while now. According to a statement from the SFMTA:

The testing requires the Muni subway to close early on weeknights and over the weekends for four weeks. Testing will begin with the start of service on Saturday, July 22 (approximately 7 a.m.) and continue until the end of regular service on Sunday, Aug. 20 (approximately 1 a.m., Monday).

Let the testing begin for the first new #MuniMetro train, expected to roll out in late summer. #SFMuni pic.twitter.com/SVOq3AGxQu

Before we get to SFMTA's myriad of excuses as to why such a large and lengthy closure needs to happen, let's indulge in some quotes from the angry masses:

"...closing down the entire subway every weekday evening and every weekend for over a month to test only five trains does seem like an extraordinary imposition on riders. Testing ought to take place overnight during the regular maintenance window." - Livable City Executive Director Tom Radulovich

"We're really frustrated. It feels like they planned this in a vacuum. This shouldn't be a thing  SFMTA should expend every and any option to avoid this kind of impact  they think of the rider last. - Rachel Hyden, Executive Director of the San Francisco Transit Riders who wrote a San Francisco Chronicle op-ed lambasting SFMTA's constant delays

Lytton also points out that other major cities are able to run similar tests without inconveniencing half the town. 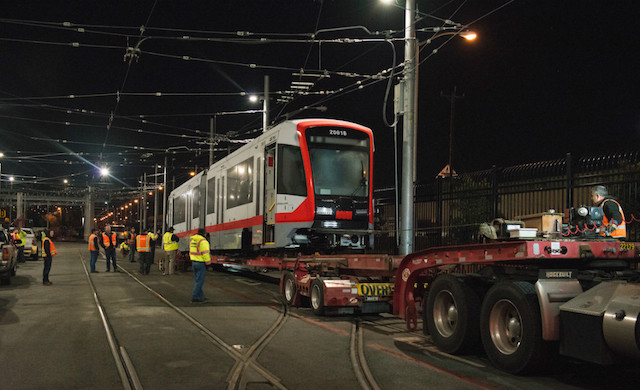 Folks over at SFMTA insist the closure is necessary. They are also super psyched about the new light rail trains!

SFMTA Director Ed Reiskin find the closures an "exciting point in the development in our new vehicles  we are in the final stage of rigorous testing and acceptance process. We're in the home stretch, which is exciting."

Ruskin went on to explain, "The most complicated part is testing with the automated system in the subway  in order to fully test the system to make sure everyone can talk with each other, we will need to shut down the subway for that testing to take place."

Basically, the five new trains cannot be tested during the normal maintenance window of 1 a.m to 5 a.m. because it isn't long enough to fully test the trains, especially for tests of emergency breaks and hard accelerations.

"One testing requirement is to run the train for 1,000 hours to really 'kick the tires' and make sure they are ready for service. We have to follow and meet several California Public Utilities Commission (CPUC) guidelines/requirements before these trains can go into service. A four-hour closure window wouldn't be feasible to getting these much-needed trains on the streets and in-service," SFMTA spokesperson Erica Kato told Streetsblog.

On the plus side, once these five new light-rail trains are good to go, SFMTA won't need to keep running tests every time they get a new train. In the meantime, folks who need to use the Muni subway and find it closed can use the following replacement bus map for the next month. 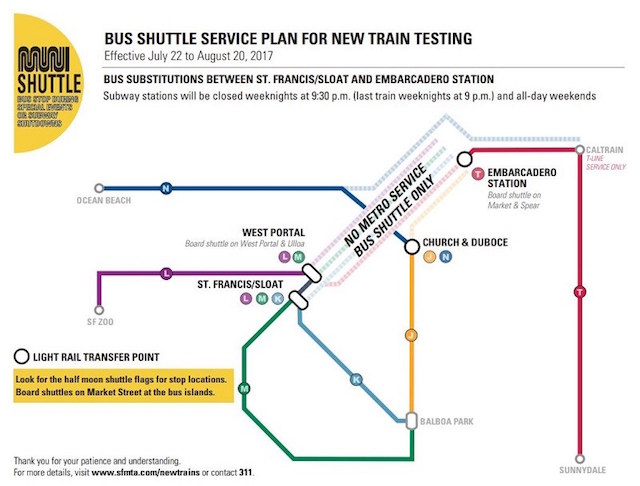 According to ABC7, the subway will be open for the weekend of Outside Lands (Aug. 12-13), so that's nice.

Related: Central Subway Is Almost A Year Behind Schedule

One exciting side effect of the Oroville Dam spillway crisis this winter has been a new  albeit modest  gold rush along the rivers that the spillway fed into, like the Feather River and

Maybe you, too, have thought about what a shame it is that with all the tools technology has brought us, we remain connected mostly just to the familiar  our own friends and family.