Driven nearly to extinction a century ago, gray wolves, also known as timber wolves, are slowly coming back into California  and brand new wildlife camera images show a family of three pups, which represent only the second known litter born in the state in 100 years. As the Associated Press reports, Lassen National Forest has been under the close watch of biologists since May when the first evidence of the wolves appeared. Then, on June 30, after multiple attempts, researchers captured an adult female gray wolf and collared her with a GPS tracking device  the first time that one of the species has been fitted with such a device in California  also discovering before releasing her that she had recently given birth.

The Chronicle picks up the story from there, saying that what was believed to be a pair of wolves in the area turned out to be a new family of five, which has now been named the Lassen Pack. Scat samples found in the forest turned up a genetic connection between the adult male the female mated with, and OR-7, the first wolf that was known to have entered California in 90 years, back in 2011: he is OR-7's son.

Last weekend, researchers in the forest discovered puppy tracks, and then found the incredible images above and below on wildlife cameras stationed in the forest, showing the three pups at play with their mother.

"This is a pretty incredible conservation moment,” says Amaroq Weiss, the West Coast wolf organizer for the Center for Biological Diversity, speaking to the Chronicle. "It’s the second time in 100 years that we know wolves have tried to raise a family in California, and it’s another sign that the state is good wolf territory." 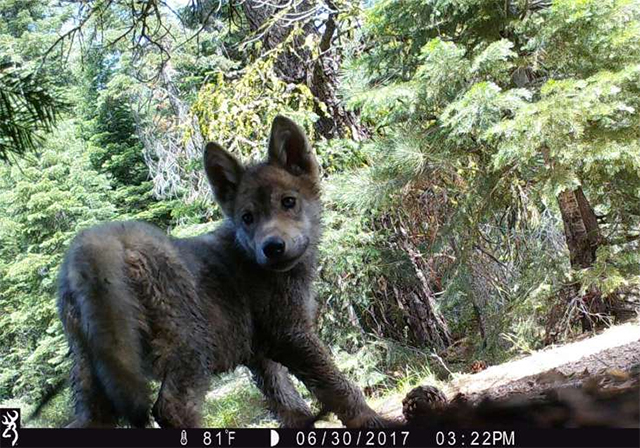 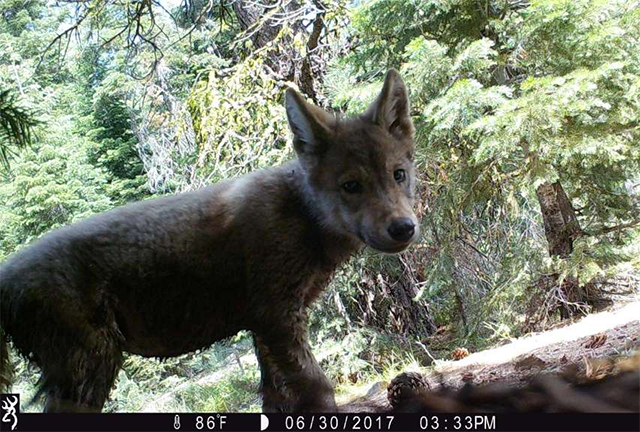 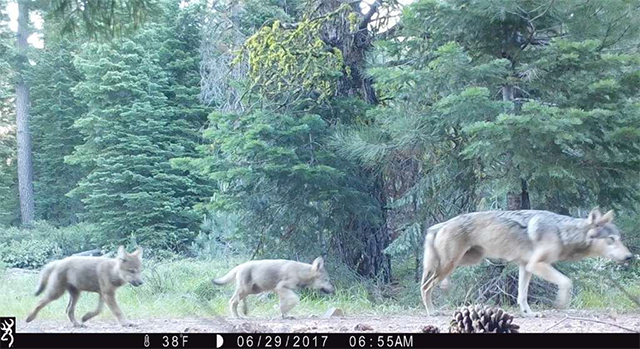 Back in January 2016, a male gray wolf dubbed OR-25 was spotted in California, and it was surmised at the time that he might have been venturing south out of Oregon in search of a mate. And back in the summer of 2015, a family of five gray wolf pups was spotted in Northern California and dubbed the Shasta Pack, and as the Chronicle reports, "The seven members of the Shasta Pack  which all sport distinctive black coats  have not been seen in Siskiyou County since May 2016, but one of the grown pups was confirmed in northwestern Nevada in November." Also, this pack was believed to be responsible for first reported case of livestock predation in the state in more than a hundred years.

Gray wolves were granted endangered species protection in California after OR-7's appearance in 2011, and this was opposed both by big game hunters and by ranchers who fear for their livestock. Back in the early part of the century there were as many as 2 million gray wolves in North America, but European settlers fearful of wolves from fairy tales (and of losing livestock), hunted them to near extinction and completely eradicated them in California by 1924.

Wildlife officials are hoping, as the AP says, that "the tracking collar on the Lassen Pack's adult female could help minimize the friction with ranchers by learning the animal's survival, reproduction and prey preferences."

by Rebecca Cohen For two weeks in April 2016, you could board a bus in San Francisco, climb into a personal sleeping pod with fresh linens and free wi-fi, and wake up the

by Rebecca Cohen A grass fire in Crocker Amazon Park prompted a shelter-in-place order for John McLaren School in Visitacion Valley this afternoon, with officials telling teachers and students at the public elementary

—
Photos: Adorable Gray Wolf Pups Are Some Of The First Seen In California In A Century
Share this