In a defiant move that is totally in keeping with guerrilla muralist Banksy's MO, the mural of a rat that first appeared seven years ago on the side of The Red Victorian bed and breakfast in the Upper Haight, only to be cut out and removed and shown in art shows, mysteriously reappeared in the same spot sometime in the last week or so  so surreptitiously, in fact, that the owners of the building at 1665 Haight didn't even know it was there. Hoodline had the news first, but people on Instagram have already been snapping it  and reportedly the graffiti artists responsible simply used projectors to replicate Banksy's iconic work, as rumored via a neighbor who saw the act.

The motivation may have come from the original piece making a recent appearance in a SoMa art gallery, and strong sentiments in the art world that these pieces should not be displayed in museums or galleries, or sold to collectors.

Super bummer!! Rumors that Banksy repainted his Haight Street Rat (with accompanying "This is where we draw the line") have been debunked, as one of my neighbors snapped photos of some people tracing it from a projector instead of a stencil. Real shame because that window next to the text is, in fact, where my head lays at night. Hence the reprorights sign. #streetart #art #banksy #butnotbanksy #sanfrancisco #haightashbury

The original 2010 mural, done in two colors and later known as the Haight Street Rat, depicted the rat appearing to have grafitti'd a long red line that connected all the way to a neighboring building on Belvedere Street where a message in large letters read "This Is Where I Draw The Line." SF Citizen captured the full angle on it here. The piece was one of a spree that Banksy painted while touring around SF in 2010 during the premiere of the documentary Exit Through the Gift Shop.

Most of the 2010 pieces are now, sadly, gone, because the city ordered them removed or covered under its graffiti ordinance  which seems weird because they could have just been retroactively called murals, but I digress.

You may recall how in late 2010 the former (and now deceased) owner of the Red Victorian, Sami Sunchild, who had always considered the Banksy piece vandalism and was about to paint over it, allowed the piece to be removed whole by local self-described "art freak" Brian Greif with the caveat that it couldn't be sold. Haight Street Rat then popped up in the lobby of the US Bank tower in Los Angeles in 2014, and was also shown in a Miami gallery show alongside other Banksy pieces that had been removed from exterior walls and were never intended be sold or displayed by the artist.

For the very reason that Banksy does not intend for these graffiti pieces, which at their heart express anti-establishment sentiments, to be displayed in museums or sold, SFMOMA refused to accept Haight Street Rat as a gift from Greif without a letter from Banksy allowing this, as well as a certificate of authenticity. Banksy refused to provide that, and some of this forms the drama of the subsequent documentary Saving Banksy, which was executive produced by Greif. 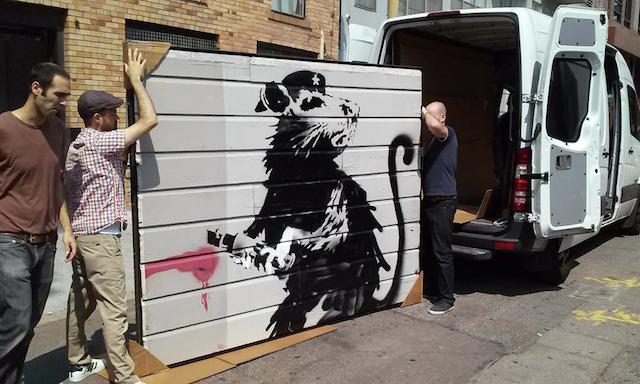 As far as we know, Greif still has the original Haight Street Rat in his possession, and has complied with his promise never to sell it and refused multiple six-figure offers  despite Hoodline suggesting it was sold to a collector.

The original has been on view for several months at the Weinstein Gallery in downtown SF as part of a show of "urban surrealism," which perhaps sparked the recreators to do their work in the Haight, possibly overnight on July 4 while cops were all preoccupied with fireworks shenanigans.

A free public art from Banksy, taken down to make huge economics for the gallery and the wall owners. You decide. #banksy #banksyrat #freeart #urbanexplorer #streetarteverywhere #ethics #vsco #art #savingbanksy

So, everyone's hopes that Banksy was just getting rolling on a fresh round of San Francisco street artworks appears to have been debunked, and it's unclear how he'd even feel about this kind of replication. But, the reappearance of Haight Street Rat in the exact place it once was at least expresses the idea, that he would approve of, that this piece belongs here and only here  and that such "vandalism" has a way of sneaking right back once it's "cleaned."

As Curbed notes, says Haight resident theelizzrdqueen, who spotted the piece out her window this week, "I'm glad #thebanksyrat is back. His presence reminds me that the resistance is still alive, that people do care and are fighting back and that a single person or a single act can make an impact that reverberates throughout the world. And that act can be as small as putting up a piece of art where you aren't supposed to."

It remains to be seen if the building owners will be forced to cover this one up too.

I didn't really celebrate much this #4thofJuly, largely because it seemed a bit strange to be celebrating our nation's independence and freedom when, at this time, those very things seem so at risk for so many people. I went to bed early, while the sounds of fireworks and revelry still echoed throughout the city, and couldn't help but think that the sounds could just as easily have been bombs, gunfire. How for many people in this world--and even within this country--the echo of distant booms mean bloodshed, not celebration. I went to bed feeling a little bit hopeless and depressed, like maybe everyone in this country is just too busy getting belligerently drunk on cheap booze to think about this shit. So, when I woke up to discover this @banksy piece had appeared overnight on the building directly across from mine, I found it oddly comforting. It's technically a reappearance as this piece is located in the same spot as the previous one, which was accompanied by the text "THIS IS WHERE I DRAW THE LINE" on the adjacent building and was removed back in 2010. I'm glad #thebanksyrat is back. His presence reminds me that the resistance is still alive, that people do care and are fighting back and that a single person or a single act can make an impact that reverberates throughout the world. And that act can be as small as putting up a piece of art where you aren't supposed to. Remember kids, making #art is a radical act, and art made with intention and a message can be revolutionary. Keep making art, don't be discouraged by the horrible people doing horrible things, keep committing radical, revolutionary acts every day until the message has spread so far and is being sung so loud that they can't ignore it any more. ✊🏼✊🏽✊🏾✊🏿✊🏻 . . . . . #vivalaresistance #resist #patrioticasfuck #fuckdonaldtrump #fuckpatriarchy #fuckcapitalism #createcommune #creativeclass #makeartradicalagain #banksy #streetart #upperhaight #sanfrancisco #1amsf


Haight Street Rat being rescued (Photo via Save the Banksy)

A photographer walking near a busy San Francisco intersection was attacked and mugged Tuesday by a suspect aided by a getaway driver. Police say that the robbery occurred at 6:12 p.m.

At least three people walking in the Tenderloin Wednesday were robbed of their jewlery, all within hours and just a few blocks. According to the San Francisco Police Department, the first in the

—
Replacement Banksy Rat Mural Pops Up At Red Vic, Was Not Done By Banksy
Share this