The Chronicle's Matier & Ross caught wind of an alarming tidbit in the ongoing investigation into the deadly June 14 shooting at the UPS headquarters in Potrero Hill: The sole suspect, Jimmy Chanh Lam, apparently walked through one of the multiple metal detectors at the entrances of the building and set off red lights and buzzers that Thursday morning, only to be waved through by guards. It would later be discovered that Lam was carrying two stolen guns and a box of bullets, and shortly thereafter, at a regular 9 a.m. morning meeting, he shot three of his coworkers in cold blood before taking his own life.

Neither UPS nor SFPD investigators wanted to comment on this revelation, which was revealed to M&R via a police department source.

The sorting and distribution center at San Bruno Avenue and 17th Street occupies an entire city block, and the Chronicle reports that as of this week, metal detectors can be found at entrances on all four sides of it. It's unclear how many of these metal detectors were in place at the time of the shooting.

A former FBI agent turned private investigator, Rick Smith, advises the paper, "It’s easy to criticize security, but there had to be some behavioral issues he exhibited before that should have been addressed.”

Lam has been described as a "loner," and no motive for the shooting has yet been revealed.

Below, an SFPD evidence photo showing the backpack Lam brought with him into the building, which still contained a box of bullets.

As we learned last week, Lam was carrying a MAC-10 with an illegal 30-round clip, which he allegedly used in the killings of Wayne Chan, Benson Louie, and Mike Lefiti, as well as an automatic pistol he used to shoot himself. The guns were stolen from different sources, in Napa and in Utah, and it remains unclear how Lam obtained them. 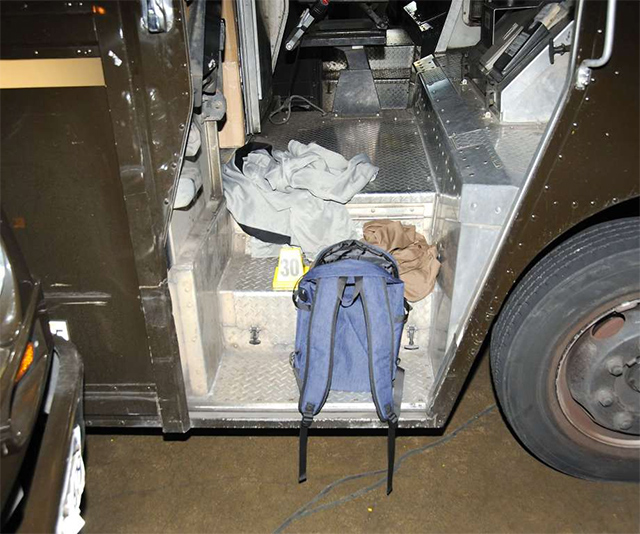 The San Francisco Police Department is investigating a brazen midday home invasion robbery, after a man was surprised by a gang of thieves in his bedroom. According to the SFPD, the crime occurred

A 25-year-old Uber contractor was charged with grand theft after stealing over $25,000 in Uber rides and Uber Eats delivery. That's a lot of vegan chili fries. CBS 5 reports that Bernie