Bodycam footage from police officers is typically used only to determine innocence or guilt in high-profile use-of-force incidents. But a new Stanford study puts big-data analysis to bodycam footage, analyzing 981 routine Oakland Police Department traffic stops and the 483,966 words used in them. In findings whose full text was just published in the Proceedings of the National Academy of Sciences, the Stanford researchers found that police were more likely to use polite and courteous terminology with white drivers than black drivers.

“Police officers speak significantly less respectfully to black than to white community members in everyday traffic stops,” the study says in its top-line findings and abstract. “We find that officers speak with consistently less respect toward black versus white community members, even after controlling for the race of the officer, the severity of the infraction, the location of the stop, and the outcome of the stop. Such disparities in common, everyday interactions between police and the communities they serve have important implications for procedural justice and the building of police-community trust.” 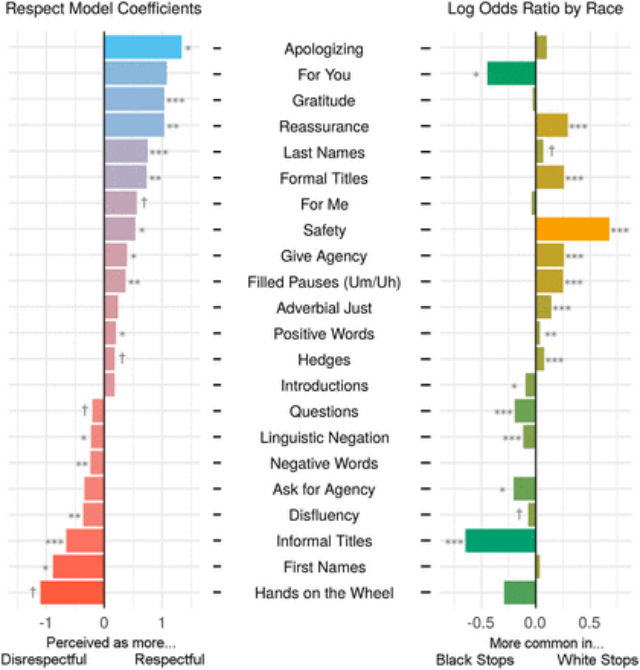 This being a peer-reviewed study, we've got a little statistical leg to show. The above graphic shows the perception of language as respectful or disrespectful on the left hand side (Respect Model Coefficients), and on the right distribution of these language factors by race (Log Odds Ratio by Race). As we see, traffic stops of white people were more likely to include reassurances or reminders of safety, while stops of black drivers were more like to include informal titles (“dude,” “bro,” “bud”) and reminders to keep hands on the wheel.

Other races were included in the study, but the writeup compares the two most outlying ethnicities in terms of treatment, which were white and black.

“To be clear: There was no swearing,” co-author and linguistics professor Dan Jurafsky said in a press release. “These were well-behaved officers. But the many small differences in how they spoke with community members added up to pervasive racial disparities.”

The Chronicle sought out the reaction of Oakland’s Black Lives Matter co-founder Alicia Garza. “Oftentimes when we talk about race and racism, we talk about individualized actions between people,” she said. “But what Dr. Eberhardt’s study is really pointing to is the ways people’s individualized actions point to a systemic set of practices that has impacts on people’s lives.”

Yet the researchers insist their goal is not to call out the police, but to identify tiny escalation factors that exacerbate conflicts. “I’m hopeful that, with the development of computational tools like ours, more law enforcement agencies will approach their body camera footage as data for understanding, rather than as evidence for blaming or exonerating,” co-author and psychology professor Jennifer Eberhardt told CBS 5. “Together, researchers and police departments can use these tools to improve police-community relations.”

Related: Oakland Police Say They Accidentally Deleted 25 Percent Of Their Body-Cam Archive
Image: The PNAS (and yes, that it what researchers call this publication)

A two-car collision at the intersection of Kezar Drive and Martin Luther King Jr. Drive in Golden Gate Park resulted in a rollover and one woman being injured Tuesday afternoon. [ABC 7] Governor

Good news for cyclists who have to deal with the daily hazards of biking all the way up and down Market Street from downtown to the Castro: The SFMTA Board has approved the