A community benefit district downtown that encompasses what we usually call Rincon Hill and the Transbay District is spending $70,000 on marketing to get us to accept their new name for the neighborhood: The East Cut. The reasons for the rebranding aren't totally clear  and this is hardly the first time that real estate interests have tried to coin a new moniker for an evolving part of town  but all I can say is no. Nope. Stop trying to make The East Cut happen.

As the Chronicle's John King explains, the two-year-old organization began as the Greater Rincon Hill Community Benefit District (CBD), using tax assessment dollars from new property owners in the area  in buildings like One Rincon Hill and the Infinity towers  to fund sidewalk maintenance and homeless-clearing efforts. (There's a similar effort to shuffle panhandlers along and/or direct them to services by the Union Square Business Improvement District, and there are currently 13 other CBDs covering other neighborhoods around the city, all with their own priorities.) But the executive director of the Greater Rincon Hill CBD, Andrew Robinson, is using part of his $2.5 million annual budget to launch this rebranding effort, complete with a logo and a new website, saying the East Cut is "a 21st century idea of what a neighborhood should be, mixing old and new and a variety of uses."

Was the Transbay District just too... bus station-related?

There is some history with the name, as the website explains: Once upon a time in 1869, the original Rincon Hill was bisected by what was called the "Second Street Cut," creating the thoroughfare we know today that made it easier for wagons and buggies and streetcars to get from downtown to the docks at what we now sometimes call South Beach, down around AT&T Park.

But now, Robinson and his ilk want to rename the approximately 25-block area encompassing Rincon Hill, Rincon Point, three blocks of the Embarcadero, and the entire Transbay District from Jessie Street down to the Bay Bridge approach as The East Cut, and they've already got their "community guides" (i.e. the guys who shuffle the homeless along) wearing logo jackets that say this. See the labeled map here, and below. 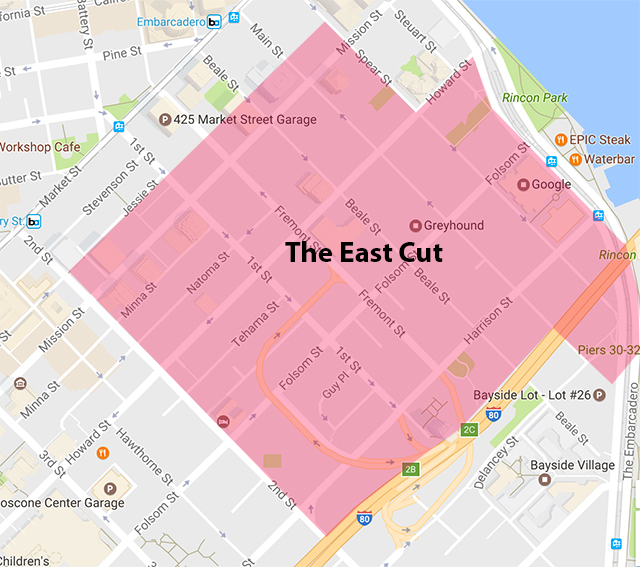 King points out there have been many failed efforts to rename neighborhoods and parts of neighborhoods in the past  anyone remember when the area near Dolores Park tried to be called the Trans-Mission? Or how about DivCo? Or SoCha? But on the flip side, SoMa has only been SoMa since the '80s, and that's stuck.

As one area resident, Lauri Mashoian, tells the Chronicle, "I don’t know why they want to rebrand Rincon Hill, which is real and historic and accurate... If you have to explain something, maybe it’s not right."

Next time you hear anyone say they live in the East Cut, just laugh at them and berate them. That may work to kill this thing.

Related: How Cow Hollow And Dogpatch Got Their Names, And More Fun Neighborhood Facts

You heard the news, yes? Serena Williams is pregnant with Reddit co-founder fiancé Alexis Ohanian's baby, and she's either moving already has moved to San Francisco. Well now, in a post-match interview at

The case of the Richmond woman at the heart of a sex scandal that rocked several law enforcement agencies has reached its first stage of resolution. ABC7 reports that 19-year-old Jasmine Abuslin has

—
Now They're Trying To Rebrand Rincon Hill As 'The East Cut' And You Know What? No.
Share this