Behold our favorite lines from Campbell's artist statement and explanation to the Planning Commission, which he did out of courtesy. They're already installing the lights whether you like it or not.

Sold! Times Square is the worst.

You can kinda get the gist from Campbell's renderings, but details include perforated aluminum casing for the lights. They will be on the outside of the sheeting and face inward toward the building so that all of the people in the city will see the LED colors bounce off the aluminum and it'll be awesome and add richness to our lives. It won't always look like there are giants trapped at the top of Salesforce. The nine stories of lights will be, they say, "low-resolution moving color imagery. The images would be a combination of pre-recorded images and those taken from cameras surrounding the City." 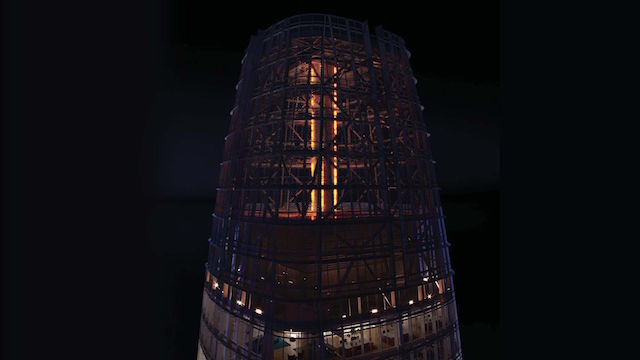 The light sculpture is touted to be America's tallest public art installation. The project, commissioned by tower developer Boston Market Properties, is part of San Francisco's “1 percent for art” program that forces developers to spend at least 1% of the cost of each project on public art.

Salesforce Tower was designed by Pelli Clarke Pelli and is slated to open in 2018.

Previously: Salesforce Tower Officially Tops Off; Top Floor To Be Event Space Available For Community Use

We warned you at the beginning of the week that this year’s record-size Sierra snowpack melt could cause overflow and flooding near Merced River in Yosemite National Park, and that fishers, swimmers,

A recent investigation alleges that San Francisco-based company Cloudflare provides extremist websites with data delivery services and delivers the contact information of people who complain about hate speech to the hate spewers. As