For a taste of California, a puff of any old Humboldt County grass will do. But for a pot-smoking experience with a uniquely San Francisco feel, sneak over to Barbary Coast, a 2013-opened medical marijuana dispensary that just doubled in size this year to add an indoor vaping, smoking, and concentrated pot "dabbing" lounge, one of a small handful of such spaces in the city and by far the classiest of the bunch. 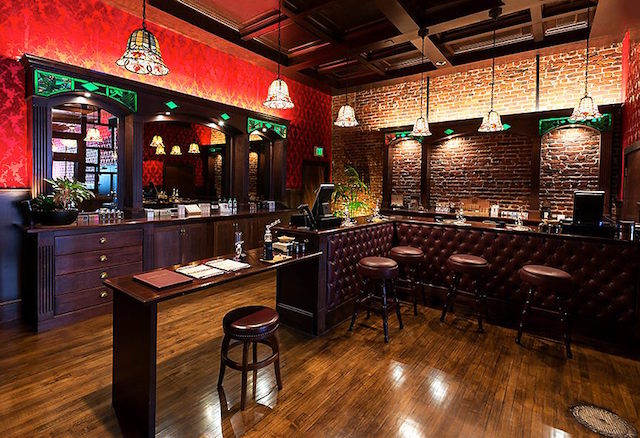 As the name suggests, Barbary Coast is in part a throwback to San Francisco's long-gone vice district and the often associated prohibition-era speakeasies of a city that only nominally observed a federal ban on booze. But Barbary Coast's vibes double as commentary on the contemporary splendors of 2017 San Francisco, where pot of all kinds is almost-but-not-quite on the level, and speakeasy chic is a popular bar and lounge aesthetic. In fact, it's a more appropriate theme for an establishment like this one, hawking a long-controlled substance on the verge of mainstream recreational sale, than it is to the many SF bars with similar vibes where mixologists whip up cocktails whose only criminal element are $15 prices. 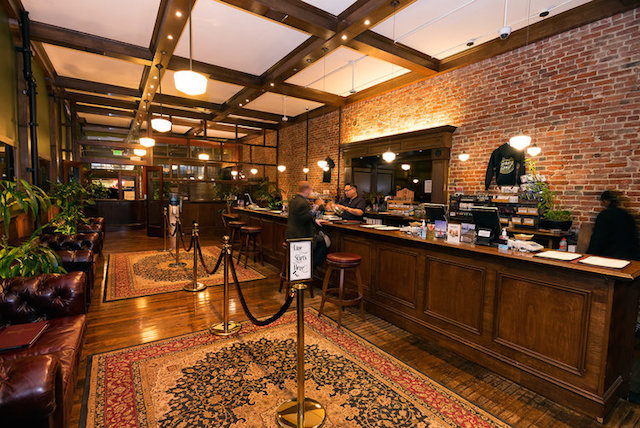 Given its theme, Barbary Coast's location, at 952 Mission Street between 5th and 6th Streets and down the block from the Old Mint, is suitably rough but not altogether forbidding. For now, although I'd guess the dispensary has plans for a recreational license whenever those are issued, Barbary Coast's customers need a doctor's recommendation to enter the premises. From there, "budtenders," as they're known in the biz, take patrons through a lengthy, leather-bound menu of smokable flowers, vapes, and concentrates.

You can take those to go, as before, but purchase $40 of product and you're entitled to enter the new lounge and dab bar area. As in the dispensary proper, the vibe is masculine, with exposed brick and leather booths that would fit right in at a steakhouse. Every table includes a vaporizer for "patients" to use, and rolling papers for indoor smoking are also provided. The nicest flourish: Victorian-style patterned wallpaper hat, although this may not be intentional, is furry and pleasing to the touch (especially to those experiencing enhanced tactile sensation).

In what's probably a grand speakeasy tradition, there are a number of seemingly arbitrary, by-the-book rules that Barbary Coast enforces to keep Johnny Law from raiding the joint. All dispensaries are notoriously cagey about taking photos, so phones are generally best kept out of sight. But for one funny example, while in the lounge, a friend answered a phone call, and an employee swung by to tell him that this wasn't just against the rules — it was a HIPA violation. Other patients, she explained, weren't to be disturbed. 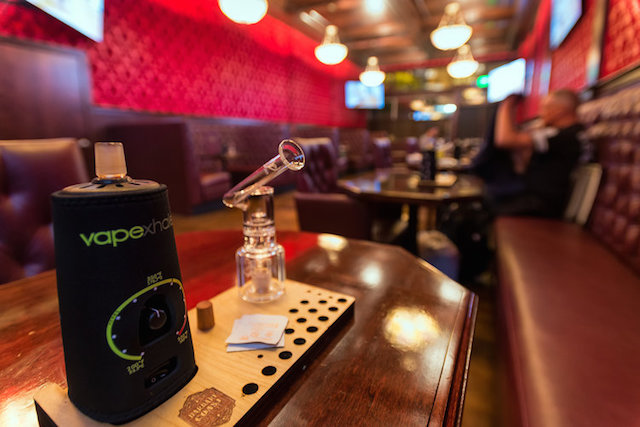 Besides obtaining a recommendation from a pot doctor, the biggest barrier to entry at Barbary Coast's lounge is the $40 purchase necessary to enter the lounge. That's per person, and, $40 of pot is more than one person can smoke in a very busy few days of being constantly stoned. It's far too high a bar for a time-limited session like the ones offered at Barbary Coast's lounge.

But for those with a pot card who've outgrown the somewhat seedy smoke circle at Hippie Hill, Barbary Coast is a 4/20 godsend. They're offering special deals and booth reservations in the lounge that could be worth your while tomorrow — although, be my guest, go witness a fist fight break out in a drum circle at Golden Gate Park. It's a free country.

Related: Welcome To Legal Weed Boom Town, Where Even Former Sheriff Ross Mirkarimi Is Cashing In

Forty- and fifty-somethings nostalgic about the soundtracks to their younger years got a bit of good news this week and, no, I'm not talking about a Hair Club For Men coupon in today's

Tennis champion Serena Williams just posted a baby bump photo to Snapchat announcing, essentially, that she is five months pregnant, even though her reps haven't confirmed the news yet according to TMZ. And