A redevelopment plan for the Elbo Room space at the corner of Valencia and Sycamore that would add three stories to the existing two-story building to create seven units of housing could be hitting a roadblock. The current plan was granted a streamlined environmental review this winter, but according to Socketsite, its progress might be blocked by a Discretionary Review filed by the owner of the 3-unit building behind the bar, at Sycamore and Lexington.

The neighbors who launched the challenge object to the development's possible impact on their ground-floor garden, casting shadow and blocking light. The new development, ground floor retail space, a garage, and those seven units above, could also impinge on their privacy, the neighbors claim, “with many windows and balconies at our property line with direct views of our bedrooms and other living spaces whereas there are currently none." 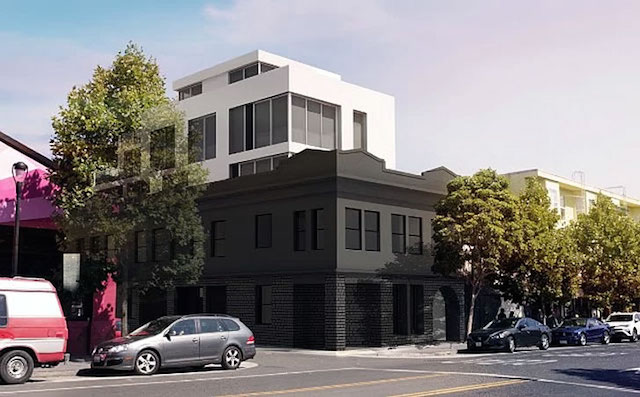 Though these neighbors want to force a redesign of the project, the developers say that's not in the cards. "Contrary to [the neighbors’] statement that we ‘do not want to change the building design’ with additional setbacks, the reality is we cannot make further reductions and have a financially feasible project," a representative from the team tells Socketsite. Because the space was declared a historic resource, it's been determined that the site must be set back 15-feet from Valencia already, leaving its current facade and placing constrictions on a possible redesign.

The planning commission will now decide the future of the development: If they grant the review, that will delay the beginning of construction, a phased process that was at one point supposed to begin at the end of 2016 and last 16 months.

This latest chapter in the years-long saga of the Elbo Room, the popular bar and venue that inhabits the current space, is a bit of a twist. For years now, the owners of the building, known for housing the 1980s lesbian bar Amelia's and a Prohibition-era a bar called The Gaslight, have had their eyes on turning the space into condos, where they've said they'd like to retire. Meanwhile, patrons have been bidding a very long goodbye to the current bar. In 2015, the Elbo Room's lease was extended through 2018, and Elbo Room's owner Matt Shapiro has maintained that he'd consider moving the bar to another location after that's up. But is it possible that if this discretionary review kills the already scaled-down project, the Elbo Room's lease could be extended further? Stay tuned.

It was SHN's turn to announce their upcoming season of theater today, and included among the Broadway-tour offerings are the first national tours of current Broadway hits School of Rock, Alladin, and Waitress,

The current wave of warm weather is a reminder that getting out of the house can be fun, and that there's more to life than your couch. Here are some activities to keep