Uber has been forced to take a long, hard look in the mirror after a series of scandals that mostly boil down to reflections of the company's aggressive attitude and corporate culture. At least in terms of demographics, Uber vowed to share what it sees with the public, a promise made after launching an investigation prompted by a public account from a former engineer at the company that detailed an environment where her supervisor was kept on despite allegedly harassing her and others. She, meanwhile, was held back for reporting the problem. Issues related to the company's male-dominated workforce went deep, according to her account: Engineers bought leather "team jackets" for men, but claimed that not enough women on the team meant it was too expensive to place an order for women's jackets, too.

Now Uber has shared its demographic and diversity stats online, a common tech industry practice launched in response to criticism and in order to foster accountability. Uber had previously avoided the practice, but it's not entirely clear why, as the ride-hailing giant's numbers are more flattering than those of peers like Apple, Google, and Facebook, according to a comparison by the New York Times.

Uber is 63.9 percent male and 36.1 percent female, but in technical roles the contrast is starker, with women occupying just 15.4 percent of those. It's better than Apple and Facebook's divide: Those workforces are just 32 percent female. 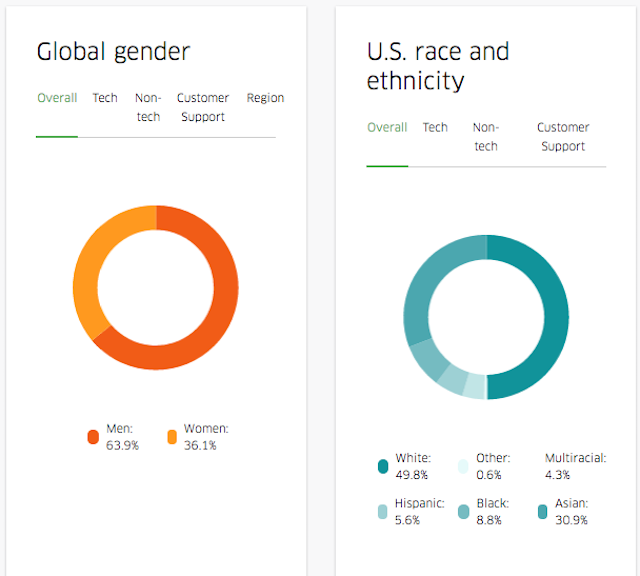 "This report is a first step in showing that diversity and inclusion is a priority at Uber,” Uber CEO Travis Kalanick said in a statement. “I know that we have been too slow in publishing our numbers — and that the best way to demonstrate our commitment to change is through transparency. And to make progress, it’s important we measure what matters.”

Parsing the numbers, TechCrunch writer Megan Rose Dickey says "the TL;DR is that Uber, like many other tech companies, is predominantly white and male." That said, the longtime industry observer found that "Uber also has pretty solid representation of people of color, in comparison to other tech companies."

Uber is 8.8 percent black, 5.6 percent Latino/a, and 4.3 percent two or more races in the US, although in technical roles, black Uber employees make up just 1 percent of the team, Latino/a 2.1 percent, and two or more races 2.4 percent. Uber also disclosed that 15 percent of its employees have a work visa and hail from 71 different countries, implicitly defending its global workforce at a time when the US executive branch has mounted assaults on non-US citizens in the country. Finally, the company drew attention to its internal "employee resource groups," from "Women of Uber," to "UberVETERANS" to "Shalom" whose stated goal is to connect "Uberettos and Jewbers from all backgrounds."

The New York Times traces Uber's cultural climate to a cult of individualism, built moslty around godhead CEO Travis Kalanick That approach has been favored due to unusual fast-growth, launching inexperienced but talented employees into management roles unlike positions they've held before.

"For the first several years, we had to just focus on executing our operational goals, and that was kind of the be-all, end-all,” Nicole Cuellar, an operations and logistics manager at Uber who has served with the company for almost four years, tells the times. “There was never the need to think about our culture like that. And I don’t think it sunk in until we all had this really gut-wrenching experience.”

Related: That Was Fast! Self-Driving Ubers Are Back On The Road, Everything Fine Now

Brace yourselves and get your clicking fingers in shape because it's time again for Outside Lands early-bird  or Eager Beaver, as they call them  passes to go on sale this week, ahead of