Has the Tenderloin smelled a bit, well, off to you lately? If so, it's not simply that you're inured to the usual smells the neighborhood is known for — although that's possible, too. The Chronicle reports that blooming flowers from Victorian box trees (Pittosporum undulatum), which are most fragrant in March, are bringing a new scent to the area.

"The Tenderloin is a many splendored thing," Chronicle writer Michelle Robertson phrases it carefully, "but it's not often associated with delicate smells and vibrant flora." Not, at least, until moments like these. Although some people would usually recommend you didn't, now is a perfect time to stop and smell the flowers in the TL — especially at night, when the box trees are at their most pungent. 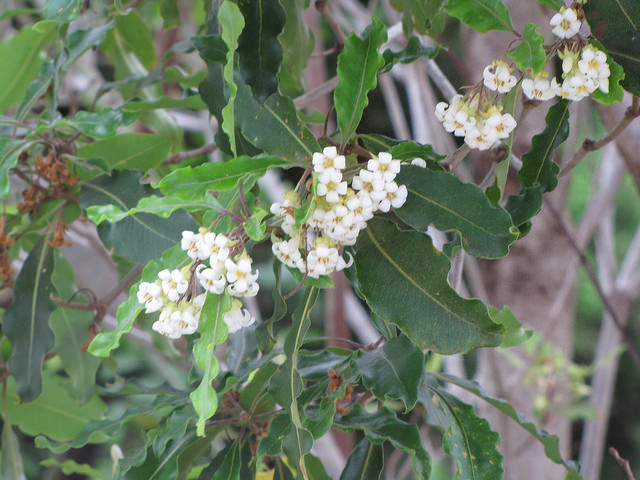 Some flowers like those of the Victorian box tree have evolved to emit fragrances after dark, Public Works urban forester Chris Buck explains to the Chron. That's because bees and other pollinators go for brighter day-blooming flowers, only beginning to scour plants like the box tree blooms after sunset.

According to the arbor enthusiasts at Friends of the Urban Forest, Victorian box trees are particularly well suited to the Tenderloin because they can withstand fog and shade. That's why so many have been planted in the neighborhood.

The blog SF Trees also highlighted them last year, noting "They aren't conspicuous visually, but they have the strongest fragrance of any common tree in San Francisco, and when they emerge en masse, they can fill entire blocks with their orange blossom-like perfume."

"This is the time when us arborists sit back and watch the public, who often think we plant randomly, witness the trees flower one-by-one," Buck tells the Chronicle, clearly taking pleasure in the result. "All of a sudden, when the flowers come out, they realize there's thought put into the trees growing around their city."

Popular, two-year-old automat-style eatery Eatsa, where meals are ordered via smartphone or touchscreen kiosks, is now being served with a class-action lawsuit arguing that the ordering system and food retrieval process discriminates against

A man who allegedly menaced a woman and child playing in a San Francisco park because he believed they were Muslims was arrested last week, but has since been released from custody. In