A couple of Lorax types at the Planning Department launched a year-long tree tabulation last January, EveryTreeSF census, and now the results are in. A 2012 partial tree census in the Bayview, North Beach, Outer Sunset, and Western Addition neighborhoods, got the ball rolling, and for this effort, the city enlisted professional tree care company ArborPro to perform the inventory and species identification.

The grand total was 124,864 trees, roughly 20,000 more than previously thought, as Socketsite observes. There's also room for more: 39,688 planting locations were identified in the process. The count didn't include trees in parks and backyards.

When voters passed a proposition to put street tree maintenance back in city control, the number of trees was an estimated at 105,000, and the added cost to the city, which was already maintaining a third of them, was estimated to be $8 million a year from the general fund. With 20,000 more trees, it's possible the city will have to dig deeper into its coffers.

As far as variety, more than 500 species of tree were found, with the most common being the London planetree. They've all been placed on an interactive map for your convenience. 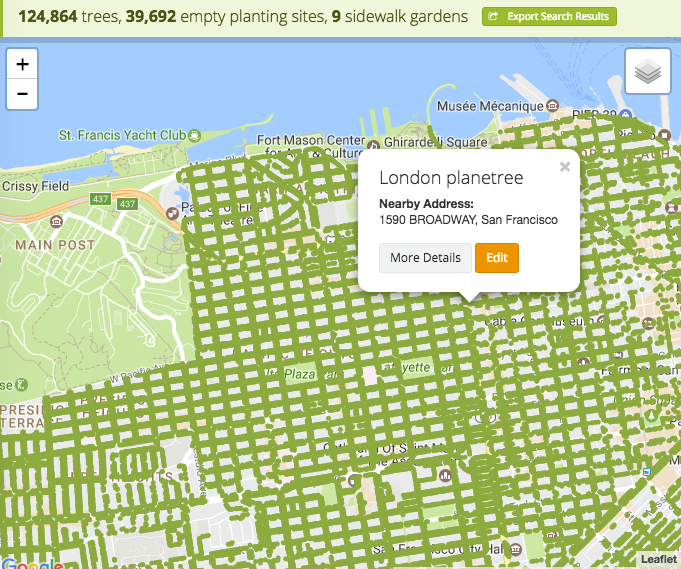 Related: SF Homeowners Could See Bills In Wake Of Storm Because Of Tree Maintenance Rules

There's been an LGBTQ vlogger revolt on YouTube that prompted an apology from the video platform Monday, but it's unclear if the issue that upset them has been resolved. As CNet reports, vloggers