File under Wildlife Spotted Where They Shouldn't Be: A wild turkey was snapped by a Castro resident roaming the sidewalk on Market Street Monday, near the intersection of Castro Street, and that is quite out of the ordinary in case you weren't sure.

Hoodline picked up the story via the Twitter account of Planning Commissioner Dennis Richards, and they spoke to Animal Care & Control who said that they received and responded to another call about the bird.

The turkey was spotted in a backyard at the nearby intersection of 16th and Market, and when ACC workers approached it, it flew off and landed on a nearby roof.

Wild turkeys can also be very aggressive around people, as many residents of Berkeley have known over the years, but they're typically not seen in San Francisco outside of a couple of golf courses and Golden Gate Park.

It's unclear why this independent spirit made it so far from the park on his/her own, but ACC is hoping that neighbors will continue to report sightings so they can perhaps keep the bird out of traffic, and return him to more appropriate stomping grounds.

Update: An SFist reader sent in this photo of the turkey spotted in a backyard near Alamo Square Wednesday morning. ACC has been alerted. 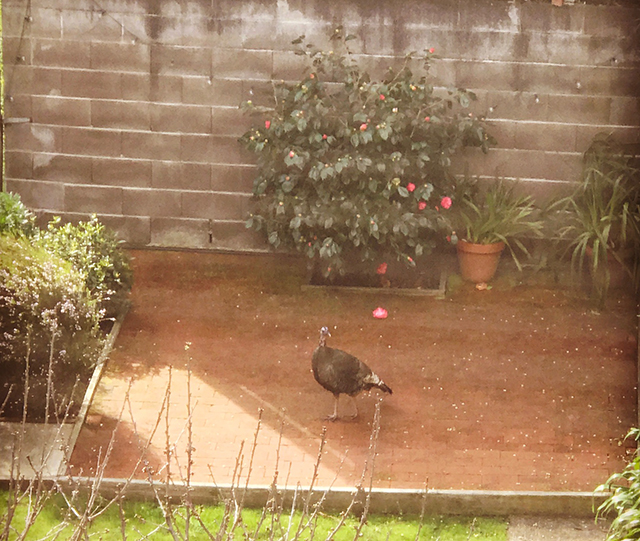 Related: The Wild Turkeys Of Berkeley

Annie Baker's latest play , currently running at ACT's Strand Theatre, is a story about truth, lies, madness, God, ghosts, and Vienna Fingers, although not necessarily in that order. John is set in a

Those in the Western Addition/Nopa/Divisadero 'hood may already be familiar with the surprisingly nice booze selection and deep bourbon catalogue at Save-More Market, a few steps up from Little Star Pizza

—
Beware: Wild Turkey Sighted Strutting Around The Castro
Share this