In an effort to be as non-partisan and kid-gloves-ish as possible with both the far left and far right, Facebook is making good on its pledge to combat the epidemic of fake news being shared on the platform, only it's not actually calling out these stories as bogus, per se. As Gizmodo first noted over the weekend, a couple of stories began showing up in people's feeds with tags below them saying things like "Disputed by Snopes.com and Politifact," and it looks like the first stories to get tagged as potentially false are both from left-leaning sites critical of the Trump administration  which is par for the course with Facebook and their deep-seeded fear of alienating conservative users.

Below, one such example: A February 26 story from the Seattle Tribune suggesting that White House leaks were coming from Trump's own unsecured Android device. 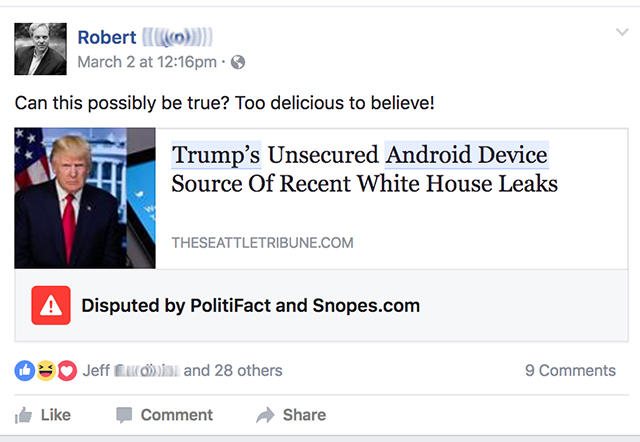 Snopes and Politifact are just two of the organizations who have volunteered to do fact-checking for Facebook, and the way a story gets flagged as disputed, as Recode reports, is that either a user has to flag it or some software has to catch it as potentially fake  software that Facebook's news team guy Adam Mosseri earlier explained will, for one, track stories that people share blindly without actually reading them, or stories that do surprisingly poorly among sharers after they've been clicked on and read.

Still, the new process stops short of calling out fake news as fake, or scheduling it for deletion  and we've yet to hear from Facebook on what it may be doing to punish the entities who are the creators of such "news."

And why has it taken three months to fact-check stuff? Facebook first started asking users to flag news as fake back on December 15.

Here's Facebook's own explainer for how stories receive the "disputed" flag, and promises that all of Facebook's fact checkers have agreed to Poynter's code of fact-checking principles, which includes a commitment to fairness and to transparency of sources.

Of course this tag still seems like it's going to do little to quell the fight over facts vs. alternative facts  all it takes is one 5 a.m. tweet from Trump calling Snopes a liberal elite organization, and there goes his fans' faith in their truthiness, such as it is.

Previously: Facebook Asks Users To Tell It What Is And Is Not 'Fake News'

After a mysterious, sulfurous scent from god knows where had San Franciscans plugging up their noses in two December incidents, fingers were pointing at Richmond's Chevron refinery. Were two flareups there that had

The biggest food story of the new year, arguably, has been New York Times critic Pete Wells's fairly bitchy review of Daniel Patterson and Roy Choi's new-style fast-food concept Locol. Many in the