Since no news about a BART project being hampered by delays should come as a shock, it should inspire little more than half an eyeroll to hear that BART's fleet of new train cars, earlier expected to be rolling out in force and improving commutes by next year, will be rolling out quite a bit more slowly. As ABC 7 reports, delays in testing out the first ten-car train of the new fleet mean that there won't be the 60 new cars put in service by the end of 2017 as was previously promised  instead they've revised that count down to 35 by year-end. And, instead of there being 230 of the new fleet of cars in service by the end of 2018, there's only going to be 166, they now say.

As we learned a couple weeks back, one possible issue stems from the fact that some of the "bells and whistles" in the new cars, like bike racks and new safety gear, have resulted in the new cars being a half ton to a full ton overweight  something that has spurred new inspections of the aerial structures in the BART system to make sure they are all up to the task of accommodating heavier trains. Since then, BART spokesperson Jim Allison issued a statement saying, "Based upon our regular inspections of our structures and our continual verification of the calculations, we do not have concerns about any increased weight of the new cars causing any of our aerial structures to collapse." 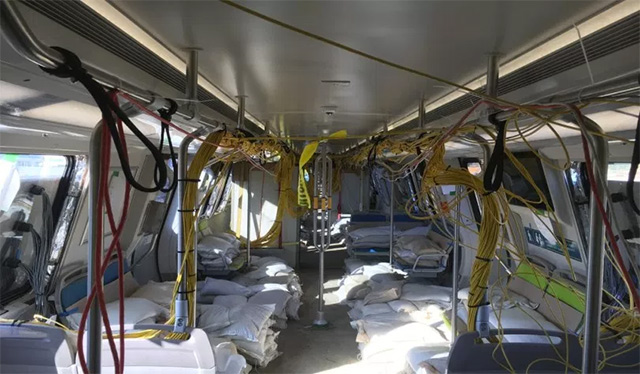 Ultimately, 775 new cars, being assembled by Canadian manufacturer Bombardier, will replace the aging train system's current 669 cars, but the new schedule means that the fleet will only be one-fifth in service by December 2018 instead of one-third.

John Garnham, BART’s program manager for the new fleet, tells the East Bay Times that the first of about a dozen new cars won't be arriving until late July or so, and will require about a month of testing, meaning that we won't be seeing them picking up passengers until the fall. Starting by the end of this month or by early April, however, you may see a test car running through stations during normal business hours without any passengers on it.

Structurally, Garnham said, the new cars they've tested are sound, and they've completed hundreds of tests on both the internal components of the cars and their functioning in motion. Still, however, there have been computer glitches particularly related to getting the cars to stop at the precise spots they should in stations, to align doors up with platform markers. "It’s basically been the software that we’ve found [problems with]," Garnham tells the East Bay Times, "and that’s not hard to change out.”

In related news, the newest station in the BART system at Warm Springs/South Fremont which was originally supposed to open by 2014 has been delayed due to glitches in BART's ancient computer system, and still hasn't opened, even though an update in December said it would be open by "winter 2017." That gives them T-minus two weeks, and it's not looking like they're going to make that deadline either.

A test car loaded up with sandbags to simulate the weight of passengers. Photo: BART via East Bay Times

San Francisco landlords were getting heated Friday in protest of a State Assembly bill that would repeal limits on rent control that have been in effect since 1995. AB 1506, at least in

"All it takes is a few breaths," says UC Davis Professor Kent Pinkerton, speaking to the Chronicle after reviewing some of the autopsy materials in the Ghost Ship case, in which all 36