“If you have not done a lot of tweeting about abortion before, you’re in for it,” Bay Area journalist Andrea Grimes said in her opening remarks to this weekend’s Abortion Access Hackathon. “People will tell you you’re a murderous, horrible slut.” That’s just one of many issues that brought together a couple hundred techies, activists, queer programmers, coders of color, and reproductive justice nerds for a three-day collaboration at GitHub’s San Francisco headquarters this past weekend. They spent Friday night, Saturday, and Sunday developing technical tools to help to help cis women, transmen, gender non-conforming people, and abortion providers navigate a new reality where the anti-abortion movement has ascending political clout, the regulatory landscape has become much more complicated, and neo-Nazi Twitter eggs are establishing themselves as the new arbiters of normal political discourse.

“The Abortion Access Hackathon’s goal is to bring together tech and activism to better support the providers of abortion,” said Emily Loen, who co-organized the event with startup manager Kate Bertash. “All of these providers and funds work on a shoestring. They’re all nonprofits. They don’t have time or resources to see how tech could support them and the work they do.”

“With 200 tech people looking at the problems they face, some really cool solutions could come out of the event,” she said. And that is exactly what happened over a weekend that saw apps developed, databases built, and online tools created to help people cope with an unwanted pregnancy. 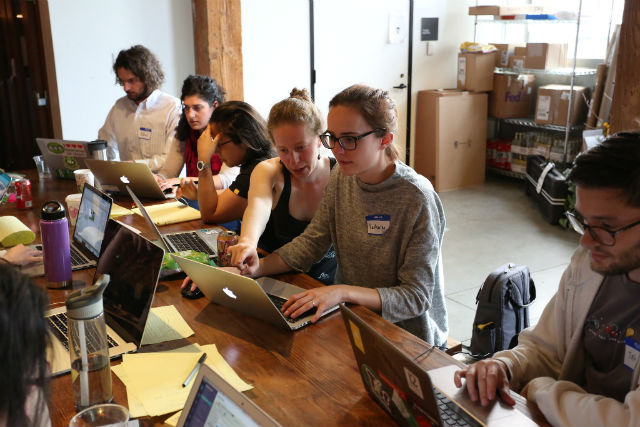 Consider the example of Termina, an application cranked out over the weekend that allows users to navigate their abortion options depending on their age, state of residence, and how far they are in their pregnancy. Termina currently exists in “live demo” mode, and will eventually be integrated into the San Francisco Sex Information website. But apps like these are intended to guide women through a sometimes confusing maze of abortion regulations, like which states require 24-hour waiting periods, which states have ultrasound requirements, and which states do or don’t allow government insurance to help cover the procedure.

“Medicaid in Texas does not cover abortion,” Alice Cartwright, project director at Advancing New Standards in Reproductive Health (ANSIRH), told SFist. “For many people who are low income, they have to pay out of pocket or seek support from abortion funds.” To that end, her team developed a chatbot called Amelia that provides those answers in a friendly, conversational way and explains to the user what the procedure might look like. 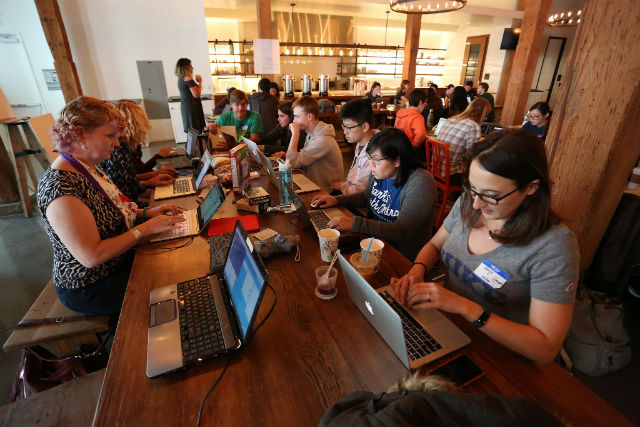 As you might infer from these photos, this particular hackathon was uniquely female-dominated. “High five to any of you out there coding on your period right now,” said Lauren Schulte, founder of the Flex Company that makes a disposable “tampon disc” that lasts up to 12 hours and helps prevent vaginal infections.

“It’s not just a corporate hackathon where people pimp their APIs,” agreed software engineer Joshua Hight. But like most hackathons, the Abortion Access Hackathon did ask its teams to quickly develop a bare-bones but functioning minimum viable product (MVP). And yes, techies do actually call it that.

“Most hackathons don’t necessarily end with a minimum viable product that’s that viable,” data engineering manager Alyssa Kwan told SFist. “The fact that there is a social mission means that there is a much greater chance that we will actually stay in touch and work on stuff.” 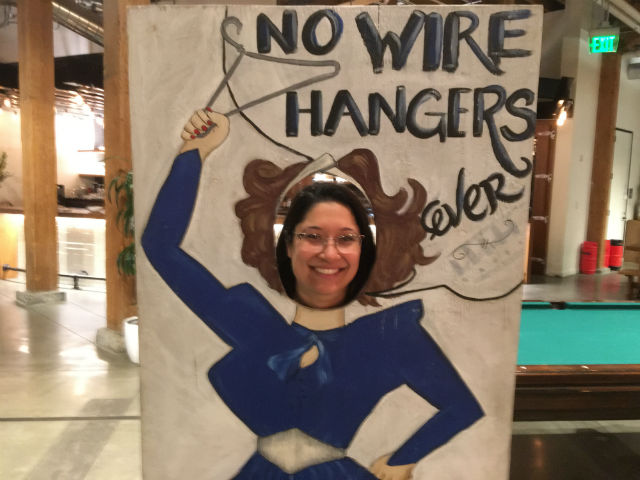 And that work is important to combat misinformation and trolling in this new digital age where a single person can create thousands of fake accounts and use them to harass people. “I spy on anti-abortion protesters online in order to make sure that the clinics are safe,” said Shireen Dada Whitaker, a social media coordinator for Women’s Health Specialists who also runs a team of volunteer abortion clinic escorts. “This harassment on the picket lines that we’ve seen for decades has moved online. It’s digital now.”

Whitaker noted the example of one clinic escort who is a schoolteacher, and whose real name and school she works at were exposed and circulated online by abortion opponents. “They actually whipped up a whole group of anti-abortion protesters to go and protest that school,” she said. “There’s a lot of doxxing going on and a lot of naming of staff, which can be really dangerous.” 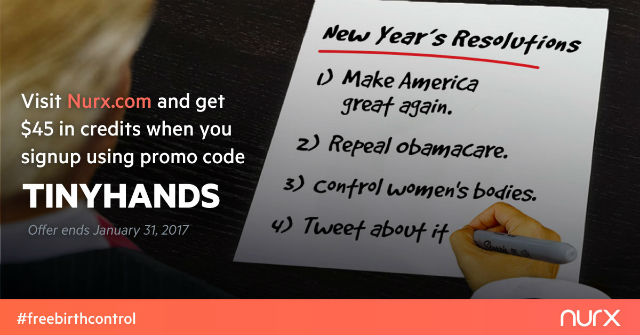 Some of the products featured at this hackathon are fully mature and already on the market. One of the co-sponsors was an app called Nurx that lets you get an online prescription for birth control pills, PrEP, and Plan B medication delivered right to your doorstep. (NOTE: The above promo code “TINYHANDS” is expired, but the new promo code “NASTYWOMAN” is now in effect.) “We do a telehealth consultation with a doctor that’s licensed in your state,” Nurx founder Hans Gangeskar told SFist. “It’s just like going to the doctor, the doctor gets all the same information, you’re just not in the same room.” 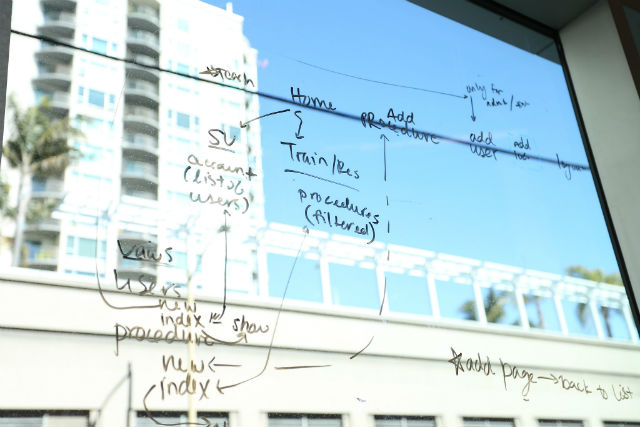 Not all the products developed at this hackathon were completely technical in nature. One project called A Better Story is devoted to crafting more effective media narratives about abortion. “The focus of it is been to come up with talking points to change the cultural narrative about abortion in the mainstream media, and in society itself as well, so that we no longer just react to Republican talking points, but actually drive our own storytelling,” said product designer, developer, and writer Faruk Ateş. ”Some of those cultural narratives are being driven by extreme fundamentalist people who are very strategic about how they approach it. They craft a narrative very specifically, then they test it out on people and, if it sticks, they just get everyone to join in on the messaging around it They keep repeating it over and over again using the strategy that if you repeat a lie enough times, people will believe it as true.”

“That’s something I want to counteract by getting people on the left and especially the Democratic Party, to crystallize their messaging and use simpler and cleaner talking points that are inclusive but don’t rely on long-winded nuanced descriptions that no one can remember or recite quickly,” he said. 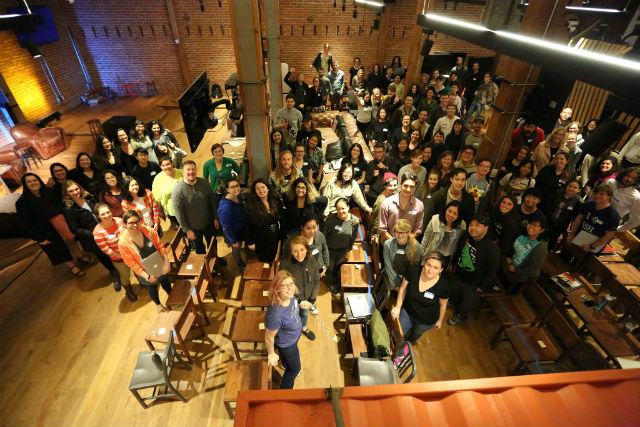 The weekend-long hackathon concluded, as many of these things do, with a series of live demo sessions where each team showed off their work. In a few cases, the team’s work created a functional product that is already online or will be soon. The debate prep app Rhetorical Uterus helps craft lovely and informed talking points for use when arguing with abortion opponents, while an already-existing website called TEACH recieved new training tools for abortion providers that will be implemented into the site in the near future.

“If people say ‘abortion’ more in these two days than they’ve said in the previous 30 years of their life,” said Alice Cartwright of ANSIRH, “then we would count that as a success.”

If you’re inspired to help any of these causes, many of them still need engineers. Or if you’re not an engineer, the National Abortion Access Bowl-a-Thon is fundraising for abortion access supporters through April 30.

Note: An earlier version of this article stated that the TEACH website was developed over the weekend. TEACH been providing training resources online and in person for more than 13 years.

The biggest food story of the new year, arguably, has been New York Times critic Pete Wells's fairly bitchy review of Daniel Patterson and Roy Choi's new-style fast-food concept Locol. Many in the

Quondam Oakland Mayor Jean Quan, the first woman elected to that office in 2011 after her work as a member of Oakland's City Council, has some new, shall we say, high ambitions. Quan,