The first of four installments of ABC's docu-drama miniseries When We Rise premiered last night, and will be available for your on-demand binging pleasure for a while to come (with the remainder of the two-hour installments airing over three nights later this week). And like Milk before it, also written and produced by the team of screenwriter Dustin Lance Black and director Gus Van Sant, the film portrays the early days of the fight for LGBT civil rights in San Francisco  although here it extends well beyond Milk's assassination and it's a story told from multiple perspectives, including local activist and Milk acolyte Cleve Jones, upon whose recently published memoir a segment of the series is based, and from which it takes its title. Also portrayed in the first installment is a young Roma Guy, co-founder of the Women's Building in the Mission with wife Diane Jones; a young Ken Jones, an African American gay activist who arrived in SF with the Navy and soon discovered the gay community here; and LGBT rights pioneer Jose Sarria, depicted in full Empress Norton attire presiding over the Black Cat Café in North Beach and introducing himself as "Mama Jose." (And it's purely coincidence that three of these people are named Jones.)

Sarria passed away in 2013 and had requested a grand funeral at Grace Cathedral on Nob Hill, which he got. Beginning with small-scale activism at the Black Cat, where he regularly performed in drag, Sarria would run unsuccessfully for the Board of Supervisors, pre-dating Milk's efforts by more than a decade, and would go on to found the Imperial Council in his mock role of "widow" to infamous Emperor Norton. Sarria is credited with helping to stamp out police raids on gay bars through clever, grassroots means, and trying to convince other gay men to let go of the stigma that was the cops' only weapon, with threats to print their names in the newspaper  by standing firm and forcing court hearings on each of their "offenses" following these raids, Sarria knew that the court system would get overwhelmed and that cops would stop making these petty arrests, which they ultimately did. While the portrayal of Sarria always in drag may not be totally accurate, he was known to perform frequently and lead patrons at the bar in a parody of "God Save the Queen," "God Save Us Nelly Queens," at the end of each night, sometimes taking them outside to sing it to those in jail across the street from earlier police raids (per Wikipedia). 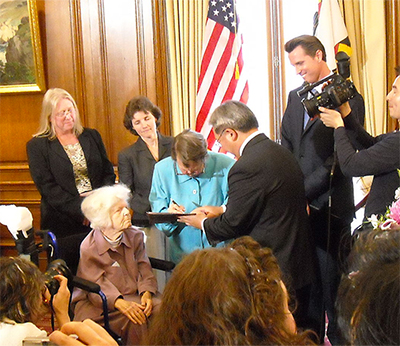 If you watched episode one, you also saw appearances by Rosie O'Donnell and Maddie Corman as real-life lesbian activists Del Martin and Phyllis Lyon, founders of the Daughters of Bilitis over a decade earlier, in 1955. A young Cleve Jones is shown looking up Martin in the phone book and calling her, eager to bridge the divide between gays and lesbians in the early days of the movement.

Lyon, now 93 years old, remains alive, and she and Martin were the first couple to be married at San Francisco City Hall in June 2008 after the California Supreme Court ruled in favor of legalizing gay marriage, setting the stage for Prop 8 and the ultimate showdown at the Supreme Court in 2015. Sadly, Martin passed away just two months later from complications from a bone fracture.

Roma Guy is portrayed in the first installment as a young woman by Emily Skeggs  who at 25 was nominated for her first Tony Award two years ago for her role as Medium Allison in Fun Home  at a time when she had just arrived in SF from the East Coast where she'd been a part of the historically homophobic National Organization for Women (NOW). She confronts the more radical attitudes of SF feminists, ultimately coming out of the closet herself, and she and wife Diane Jones would go on to create the safe space for women that is the Women's Building. Guy is now a lecturer at SF State and director of the Bay Area Homelessness Program.

Jones worked as an HIV/AIDS nurse for 33 years before retiring last year, and will be portrayed in later episodes by Rachel Griffiths as the AIDS epidemic strikes the city. Jones told the Bay Area Reporter in 2016, "I'm not one who's much for reminiscing about the bad old days of the epidemic or the sentimentality that seems to go along with this. I care about our history, but my passion is for how it informs what we need to be doing today to end this epidemic." She can be seen with Guy in ABC 7 coverage below, and she currently works on Getting to Zero, the SF-based initiative to bring HIV transmissions down by 90 percent by 2020. 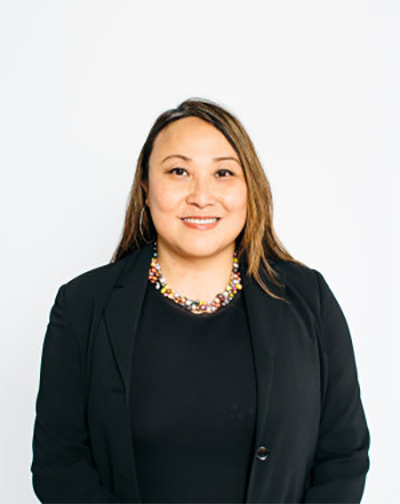 Cecilia Chung. Photo: Transgender Law Center
Cecilia Chung will be portrayed in later episodes by Ivory Aquino, and she's a pioneering trans activist and Mayor Lee appointee to the Health Commission who helped advocate for getting the city to cover the cost of gender reassignment surgery for city workers and the uninsured. Born in Hong Kong in 1965, she immigrated with her family to LA and would ultimately transition in San Francisco in 1993, first becoming a prostitute. She's a cofounder the annual Trans March, and she was the first transgender and Asian woman to head the Board of Directors of the SF Pride celebration. She currently serves as senior strategist for the Transgender Law Center.

Activist Ken Jones's story portrays the difficult history of black gay men, and veterans, who not only had to struggle for acceptance as gay men, but also faced prejudice among white gay men, and rejection from both the military and African American communities. Jones is portrayed as a young man by Jonathan Majors in the first episode (in subsequent parts he's played by The Wire and Boardwalk Empire star Michael Kenneth Williams), tragically dealing with the death of a lover in the Navy, portrayed by Charlie Carver. Jones was stationed at Treasure Island and charged with counseling Navy officers who were disciplined due to incidents of racial bias. He would later meet Sarria at the Black Cat and become part of the early movement for LGBT rights, as well as the first African-American chair of the SF Pride celebration committee.
And finally, Cleve Jones was discussing on Facebook last night how tickled his late father would be to be portrayed by David Hyde Pierce in episode one of When We Rise, since he was a big fan of Frasier and of the Niles character in particular. Jones is portrayed as a young man by Austin P. McKenzie and as an adult by Guy Pearce, and as he tells ABC 7 of the early days of the movement in San Francisco, "The cops hated us and we hated them right back." Though Jones never held political office himself after helping friend Harvey Milk win his seat on the Board of Supervisors, he would go on to conceive the NAMES Project AIDS Memorial Quilt in 1987, and remain an outspoken activist for peace and civil rights of all kinds to this day. As he says in the first episode of the series, "It's all one fight," and talks about being part of labor marches led by Cesar Chavez, and marching for the end of the Vietnam War.

In a no-doubt fictionalized version of real-life events, Cleve Jones, Roma Guy, and Ken Jones are shown all gathered around Jose Sarria at the close of the first installment, ostensibly asking for advice about to accomplish what he had in keeping the cops at bay, and keeping his liquor license.

ABC 7 will be airing interviews with all of the above real-life heroes, except perhaps Ms. Lyon, over the coming week as the series continues to air its next four installments  there is none on tonight, but the series continues Wednesday, March 1 at 9 p.m., with the next two parts airing Thursday and Friday.

Lyon, seated, and Martin signing their marriage certificate in 2008 with then Mayor Gavin Newsom looking on. Photo: Nick Gorton/Wikimedia

Though San Francisco has a long way to go before becoming a crime-free utopia, the city's 21st-century murder rate is pretty low compared to the homicide numbers we saw in the years beginning

As teased in November when it was still under the shadow of the established annual SF Sketchfest, a new San Francisco comedy festival, this one thrown by Comedy Central in collaboration with Outside