Kevin Ebach, a 25-year-old San Francisco Lyft driver and educator who overheard comments from two male passengers that he considered to be harsh and disparaging toward others, including homeless people, posted about the experience and paraphrased their words on Facebook in a somewhat well-circulated post. Ebach was prompted to do so, according to the post, when one of the passengers identified himself as the director of San Francisco's Department of Homelessness and Supportive Housing, Jeff Kositsky.

The Bay Area Reporter writes that Kositsky has apologized to Ebach privately, although he did admonish Ebach for eavesdropping, which apparently didn't keep Ebach from publicizing Kositsky's private words further in the form of sharing that apology.

"I was a bit boozy and goofy from being tired and feel that my privacy has been violated," Kositsky wrote. "I am not embarrassed by anything that I said last night but feel very shamed by the context in which it was presented. I also feel unfairly judged by someone who does not know me at all." 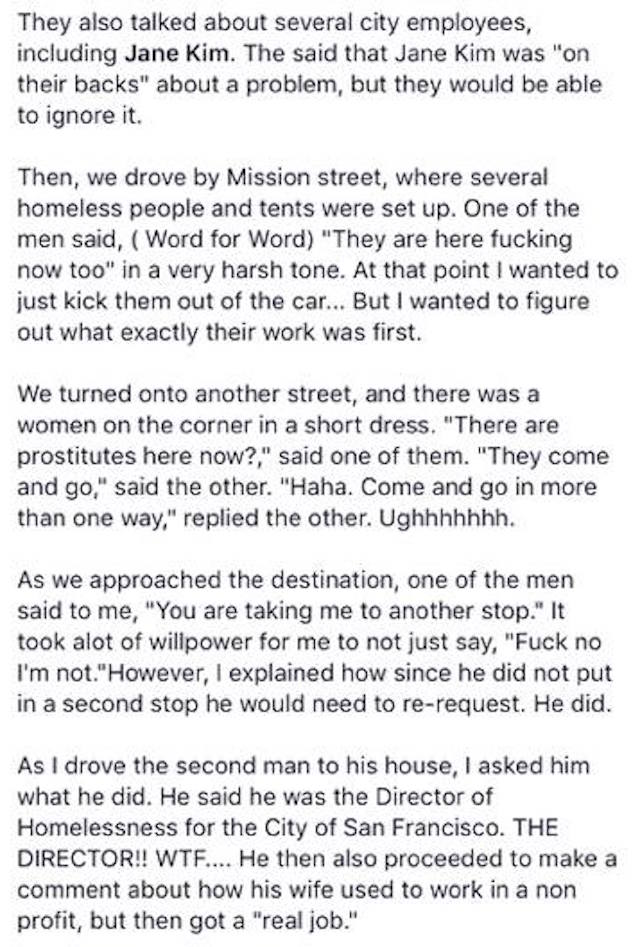 Kositsky claimed that the remarks directed at homeless people, whose tone gave Ebach offense, were made by his co-passenger "out of frustration that this has not been corrected."

"I have spent the better part of my career working to end homelessness; as a case manager, running shelters and developing affordable housing,” Kositsky reportedly added. “Yesterday’s conversation does not reflect who I am or what I’ve done for nearly thirty years.”

In a personal Facebook post to his own page referencing the public events, Kositsky wrote that "My friend and I were talking about his professional frustrations," according to the Bay Area Reporter who read the post. “We were also making light of things we shouldn’t have. I am sorry for offending Kevin and anyone who has read his Facebook post."

Ebach maintains that he's in the right. “You should know that if you’re in a Lyft, I’m not a therapist,” he says. While he doesn't go revealing everything said by everyone in his Lyft, Ebach says he was encouraged to do disclose this conversation because "people in the same field as me, it made it more jarring, more upsetting to me.” Ebach is a public school teacher.

Kositsky's on-the-record comments about homelessness, such as these in the Chronicle or even these less formal remarks on Reddit, are more measured but not necessarily scripted or "PC." When asked by one questioner in his Reddit session what one thing he would give homeless people if he could, he responded "a home." Since that answer didn't satisfy the asker, he submitted a second option: "socks."

On Saturday, the nation's largest annual Chinese Lunar New Year celebration, with one of the only nighttime illuminated parades in the country as well, came down Market Street and circled Union Square, drawing