UC Berkeley will probably think twice before booking another Breitbart histrionic to speak on campus, as last night’s canceled Milo Yiannopoulos event escalated into lively and sometimes violent protests along Bancroft Way, Shattuck Avenue, and Telegraph Avenue. The destroyed generator-powered spotlight seen above was just the beginning of the post-Milo mayhem, with roughly 1,500 protesters gathering outside the MLK Student Union. The protest turned to the streets after an announcement that the event had been canceled, and the situation turned predictably vandalous when some 150 masked black bloc demonstrators directed their fury mostly at bank storefronts, but with a T-Mobile, a Starbucks, and a Target also seeing collateral damage. 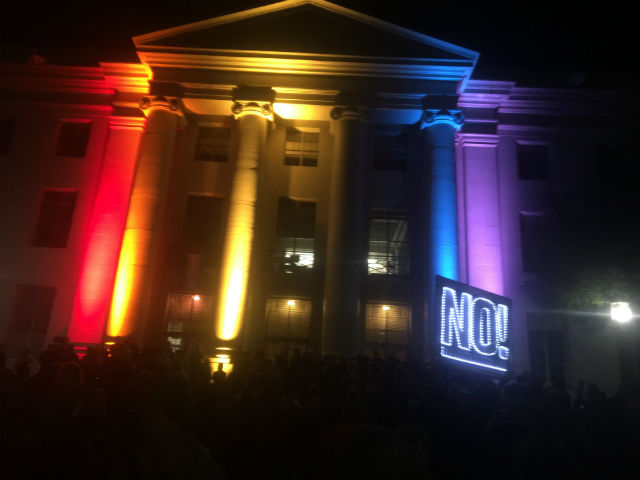 Most of those who came to protest did not realize that the speech had been canceled at roughly 7 p.m. (Yiannopoulos was scheduled to speak at 8 p.m.) The increased police and security forces on hand threatened via loudspeaker to use “chemical agents and batons”, but the demonstrators reacted by dancing and blaring Rihanna as you can see in the video below (until it gets pulled for copyright violation).

Word got out that the speech was canceled, but some demonstrators were unsure whether that rumor was just a ruse to get the crowd to disperse. “I do not trust any alternative facts,” protester Denise Jolly told SFist. 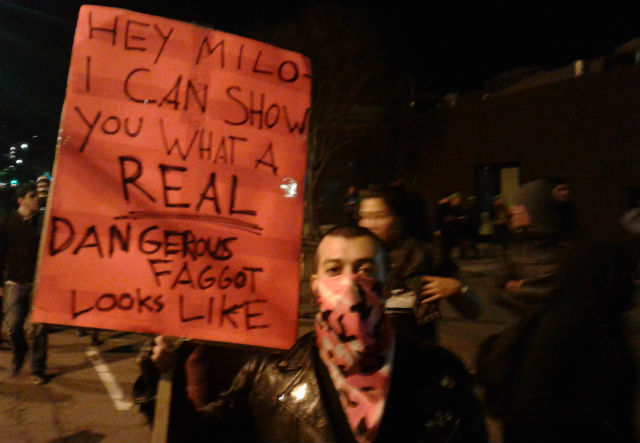 Once the 8 p.m. hour hit and it became abundantly clear that no event was taking place inside the auditorium, the demonstrators proceeded down Telegraph Avenue and began what appeared to be a peaceful protest.

It would not be a peaceful protest. The police appeared to make something of a tactical error by remaining at the MLK Student Union, allowing the protests to escalate, unmonitored, into violence. 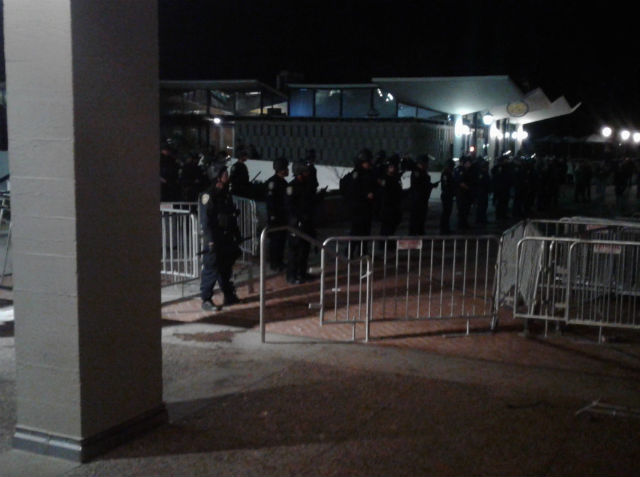 Bank branches in particular were singled out for window-smashing, graffiti, and ATM desecration.

“If those people who shame people for breaking stuff, if they truly understood what the country does to us that’s corrupt and wrong, then they’d probably be busting windows too,” Oakland resident Mark Sanders told SFist. “My childhood home was foreclosed upon because Wells Fargo lied to my mom. They made her sign illegal papers. And they’ve done it to thousands of people across the country.”

The vandalism was pointedly directed at banks, and the Ike’s Sandwiches location and various small businesses were spared the protesters’ wrath. 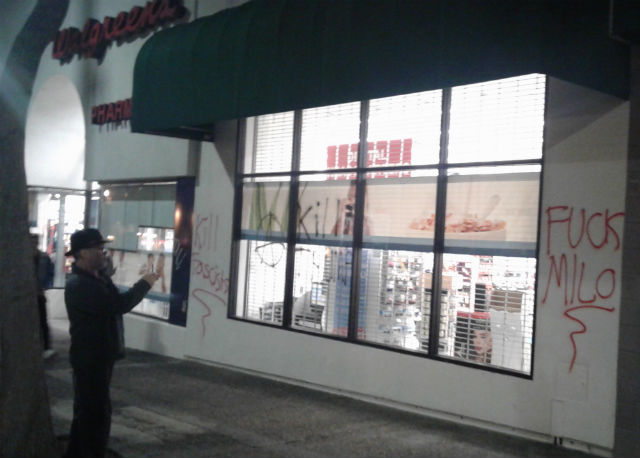 “It was calm, nothing happened,” the on-duty employee at John’s Ice Cream on Shattuck Avenue told SFist, moments after the mob raged past the shop and clearly something had happened. “It was just a bunch of people walking and screaming.”

When motorists found themselves stuck in the mayhem, a few black bloccers helped them navigate u-turns so the drivers didn’t have to sit there and fear for their lives.

No arrests were made, but six were injured according to CNN. SFist spoke to a student named Matt who says he jumped in to help a Milo fan being beaten by protesters. “Five people were beating him down with sticks,” Matt said. “Not just sticks off a tree, it was wooden rods from a closet.”

“I don’t know why they destroy this city,” Berkeley City College student Jiana Brantley told SFist. “Don’t they know we’re going to have to pay it back in taxes?”

“Those windows got more insurance than all of you put together!” one demonstrator shouted at us as we spoke. 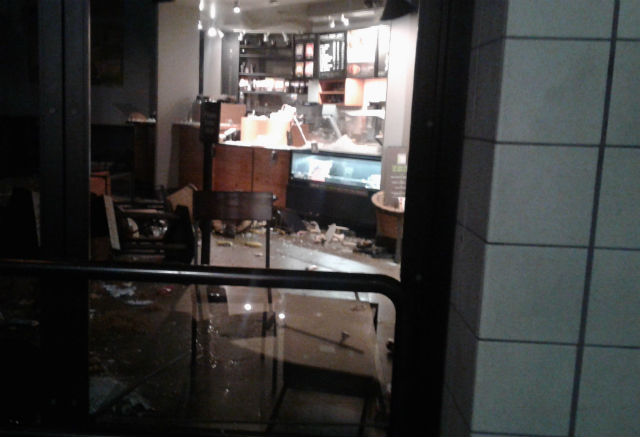 A Starbucks at Oxford Street and Center Street was smashed up and relieved of several pounds of coffee and a great deal of merchandise. (What, the protesters didn’t know that Starbucks is hiring 10,000 refugees?) Onlookers couldn’t help but record the mayhem on their smartphones, though angry black bloc demonstrators shouted “No pictures! No pictures!”

I myself was recording all this, and a young black bloccer confronted me for taking pictures. You can hear our conversation in the video below, right up to the point where he knocks the camera from my hand.

“If you’re a reporter taking pictures, you’re a snitch,” he told me.

The question of whether it is crime against the resistance to record violent protesters is a valid one, though there is also a left-wing theory that agitators are plants who wish to make the resistance look violent. Either way, it will probably remain a point of pride to Berkeley that they got Milo Yiannopoulos’ event canceled, and it surely got under Yiannopoulos’ skin. Will there be future disruptions and cancellations of his book tour? Maybe so, but you can be sure that Yiannopoulos’ agent has already cashed plenty of advance speaking fee checks.

Trading the Mission District for the Garden District, NoLa-inspired Alba Ray's is now open in the space built out for Hapa Ramen and most recently occupied by Citizen Fox at 2293 Mission Street.

A proposed national general strike to oppose any and all things Trump has been coalescing around February 17, the Friday before President's Day  when, presumably, a lot of people will be taking off

—
Video: Inside The Milo Protest That Rocked Berkeley (And Annoyed Trump)
Share this