Protesting an immigration ban ordered by President Donald Trump, signs at SFO announce "We Want You Here" and "Give Us Your Huddled Masses."

Demonstrators gathered at the airport this afternoon as similar actions broke out at Chicago O'Hare, Washington Dulles, and John F. Kennedy airports.

American protesters were responding to an executive order imposing a federal ban on US entry from Iraq, Syria, Iran, Sudan, Libya, Somalia and Yemen for 90 days. Trump's order also bars refugees from US entry for 120 days and bans Syrian refugees indefinitely. 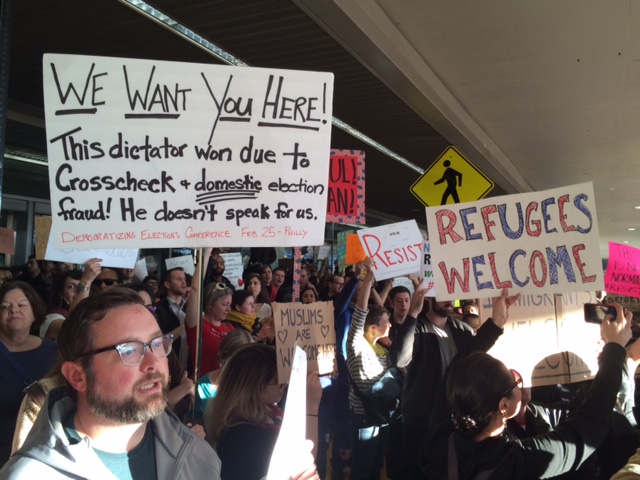 Trump's orders quickly resulted in the detention of immigrants at US international airports. At JFK, two refugees from Iraq were being held, and according to the Chronicle, reports of travelers being detained at SFO helped spur local demonstrations.

There was at least initial confusion over the number of detainees. "We have lawyers currently at SFO" Lara Kiswani of the Arab Resource and Organizing Center told KRON4. “What we’re not clear about is who or what type of families are being held... whether they’re from Syria or Iran or other countries, we don’t know for certain,”

Palo Alto-based attorney Susie Hwang told the news station "several families" were waiting at the airpot to hear whether family members and loved ones would be forced to return to their countries of origin. One woman from Iran who received asylum in the US six years ago waits on news of her 30-year-old son, who arrived at SFO this morning.

Beautiful "From Palestine to Mexico all the borders got to go!" Being chanted by hundereds at #SFO #Muslimban protest pic.twitter.com/502bn5huJ4


Hwang clarified to the San Jose Mercury News that there were three Iranian immigrants in total, the 30-year-old man and an elderly couple, who were detained after their flights.

The lieutenant governor of California just joined the protest at SFO. #MuslimBan pic.twitter.com/SvT1SytWEi

As some technology CEOs have responded to Trump's executive order with outrage and others with degrees of passivity, Google co-founder Sergey Brin, a Russian immigrant, was at the SFO protest in a "personal capacity."

Sergey Brin at SFO, told me he's here with protestors in a personal capacity, wouldn't give a comment.

@karaswisher look who joined the protest at SFO pic.twitter.com/tCfm6CS0n7

Later in the evening, SFO protesters cheered news that Federal Judge Ann M.Donnelly had ordered an emergency stay against the implementation of Trump's executive order following lawsuits filed by the ACLU and other legal organizations.

After learning about the stay, protest at SFO chants, "No lawyers/ No nation / Fuck deportation"

As protesters held tight and hunkered down, staging a sit-in, ACLU officials told Chronicle reporter Vivian Ho that two detainees were released to their families.

Spoke to @ACLU attorney at #SFO. Says he knows of at least two released to their families here. Unknown why others still held #MuslimBan

ACLU lawyers were applauded as they were permitted to speak with SFO detainees and their families.

They just let the lawyers in to speak with the detainees at SFO. #MuslimBan #sfo @cnnireport pic.twitter.com/lfFjz1D06S

The family of one detainee announced he had been jailed according to several sources on Twitter.

Family of detained young man here at #SFO just announced he has been put in jail. #MuslimBan

Family of detained young man here at #SFO just announced he has been put in jail. #MuslimBan

Protesters, vowing not to leave until all detainees are released, recharged with pizza and water, some joining with signs written on pizza boxes in sharpie

The airport staff at SFO are providing water to protesters. pic.twitter.com/fBfCr3ZIrR

"Let them go right now." Protesters have made it to the security checkpoint at SFO. pic.twitter.com/Rhz6R4AhKP

You can take BART to all kinds of weekend events - also, direct service to SFO is running great right now.

About to leave the US. Managed to organize w/friends and bring pizza, coffee and water to SFO. You should if you can too. pic.twitter.com/OlFk7dS2RL

Barely made it, by the way. Security checkpoint A at SFO now totally closed. pic.twitter.com/qVR0mmTr63

This was my favorite sign "Free Hugs from a Syrian" from my beautiful friend Salah #MuslimBan #letthelawyersin #MuslimBanprotest #SFO pic.twitter.com/EllIOpHCSt

I'm at #SFO. There's a bit of a makeshift buffet going on. Everything donated from people here #NoBanNoWall pic.twitter.com/2rJJrk0I2C

Omfg this is the 7th hour of the protest at SFO and people are getting more energized by the minute. Release the detainees! pic.twitter.com/qnfs38VpL6

This is just one small sample of the immigration attorneys still at #SFO re: #MuslimBan #MuslimBanprotest pic.twitter.com/xSZRIEa5zN

SFO protest is moving to a different checkpoint. Some airport staff cheering along the way! #Resist #NoBanNoWall #MuslimBan pic.twitter.com/DPKUKVfHi5

Hundreds showed up at SFO and elsewhere Saturday to protest President Trump's executive order on immigrants from seven primarily Muslim nations, which had led to detentions of innocent people at airports nationwide who

That was fast! Wasting no time after last week's inauguration, the costume department at Beach Blanket Babylon has already whipped up a version of that goofy Gucci Paddington Bear outfit KellyAnne Conway was