As we all continue to point fingers at groups, individuals, and institutions for causing the waking nightmare we'll all in now, one San Francisco company is in for a rough few years at the center of the blame game: Twitter. Tonight will be the first of probably many protest actions aimed at Twitter itself, with a protest projection planned starting at 5 p.m. that will label Twitter's headquarters itself "Mouthpiece of Fascism." And from the looks of the photo above, posted to Facebook, activists have already tested out and focused their equipment.

The newly, bigly inaugurated President of our country remains an ardent fan of Twitter as his sole mouthpiece, and as some have surmised already that could be helping kill the company's brand after a year of other troubles  not the least of which was greater public awareness of unbridled harassment and racism on the platform. In taking her leave of the whole mess a couple weeks ago, writer and avid Twitterer Lindy West declared Twitter "unusable for anyone but trolls, robots, and dictators." Then there's the coming lawsuit from political reporter Kurt Eichenwald who says that an animated strobe graphic, sent to him by a pro-Trump troll on Twitter who knew Eichenwald was epileptic, induced a seizure that was potentially life threatening. That should make for some bad PR for Twitter, too.

Indeed, a number of the most trollish of Trump's fans on Twitter showed up at the Deplora-Ball in D.C. last week, and This American Life's Zoe Chace spoke to some of them, all of whom seemed to think that their fine meme-spreading work on Twitter won the election. One even used the term "troll" to describe how Trump had conducted his entire campaign, praising him for his cleverness, assuming he did not mean half of what he said, and admitting, "He was trolling everyone."

While Twitter has carefully suggested that President Trump would be subject to the same banning and suspension practice as anyone who violated the site's terms and conditions, that feels disingenuous, not to mention the fact that they're allowing him to have two accounts now, his personal one and the @POTUS account. (The latter of which, during the transition of power on Friday, caused a snafu and subsequent dustup among the Twitter mafia when Trump's first tweet using the new account went out to half million people who did not follow the account, a mistake Twitter has admitted to that is nonetheless far too symbolic of the state-run media many on the left fear is in our future.) 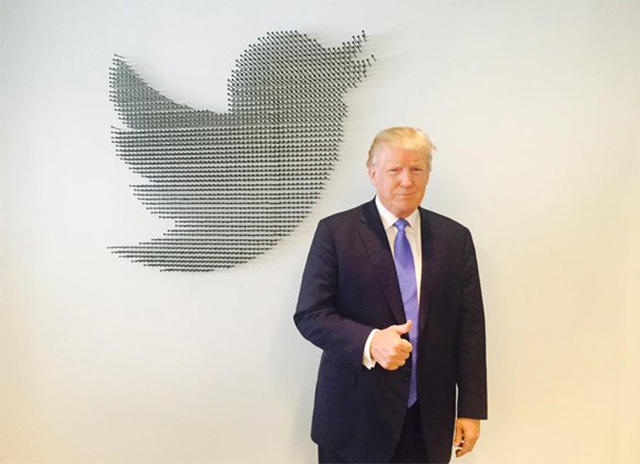 As IndyBay says in their promotion of tonight's projector action and protest, "Twitter is allowing itself to be the mouthpiece of fascism through the @POTUS and the greatest propaganda machine the world has ever known. To this we say no. Twitter endangers the world by amplifying Trump's ignorance in regards to foreign policy and nuclear proliferation. To this we say no. Twitter refuses to ban @realDonaldTrump despite his violation of their anti-hate policies."

So far, CEO Jack Dorsey has only said of Trump's Twitter use that he has "complicated" emotions about it, and that it's "fascinating," and it's "an important time for the company and service." But he also adds, "What does this mean to have a direct line to how he's thinking in real time? I'm not sure."

On the plus side for Twitter, employees of the National Park Service are having a grand time trolling Trump right now, and that kind of public revolt is being made possible by a platform this huge in scale.


Trump at Twitter headquarters in New York near the start of his presidential campaign in 2015. Photo: realDonaldTrump/Twitter

These are the tech jobs that pay women the most. [SF Business Times] A man shot by police in San Francisco earlier this month is back in the hospital. [Bay City News] Groups

Eric Danziger, CEO of Trump Hotels, got his start right here in the City by the Bay, working in 1971 as a bellman at the Fairmont Hotel. Now he'd like to see the