The Golden Gate Bridge, famous for its red-orange hue, became a sea of purple on Friday morning as thousands of peaceful demonstrators wearing that color — a symbol of unity against bullying according to organizers — joined hands in a human chain across the bridge from San Francisco to Marin.

“This is a collaborative, grassroots, community-based demonstration and performance art piece,” organizers indicated, in contrast to a protest. But still the demonstration of unity feels inseparable from the divisive proceedings of the presidential inauguration on the other coast. 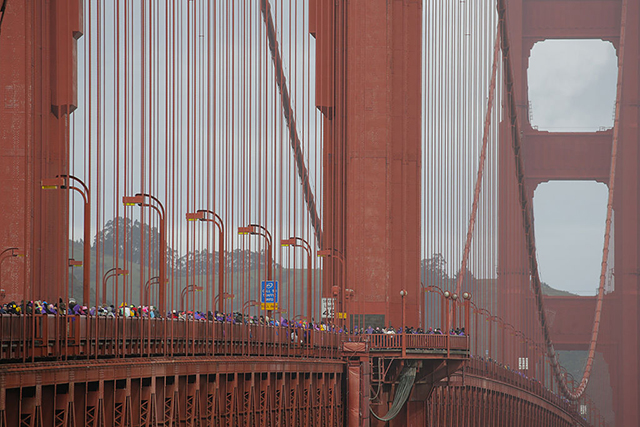 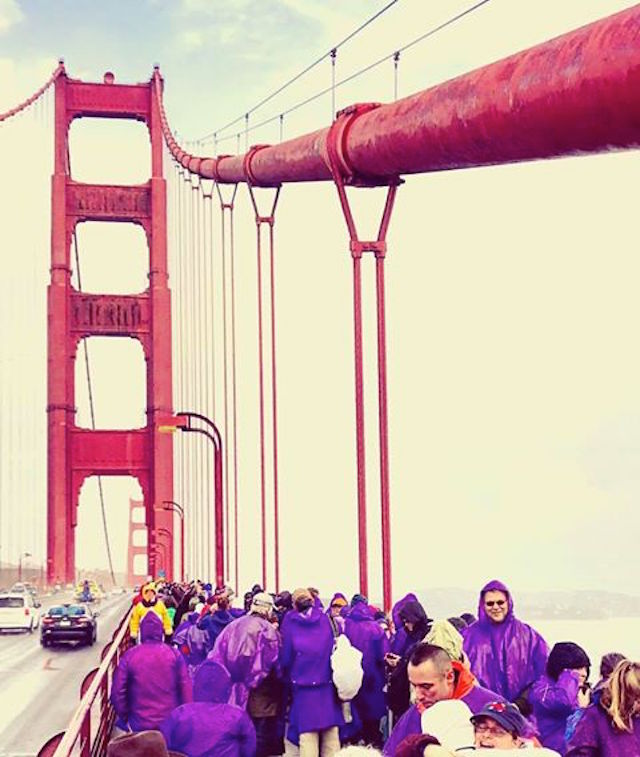 In planning for the event, identified as "Bridge Together" and the first such hands-across-the bridge event ever, organizers wrote that "3,000 participants will be allowed on the bridge itself" based on the permitting they'd acquired, while more, including volunteer organizers, were welcome to extend the chain farther North and South. Per the Marin County Sheriff, just before 11 a.m., the numbers were above 2,000 on the bridge.

Approximately 2200 peaceful #bridgetogethergg participants on the GGB right now. Walkway is at about 50% capacity.

Later, those swelled by several hundred, and according to David Morris, a co-organizer of the event, they eventually reached 3,000.

Impressive sign of unity at the #bridgetogethergg event. Appears to be stabilized at approximately 2500 people. pic.twitter.com/8Y9dgSyY7d

According to the official Facebook group for the event, banners and signs were disallowed on the bridge for safety reasons, as they could distract drivers and cause accidents.

"I'm filled with gratitude right now," Morris, a 41-year-old organizer of the event, told SFist, thanking his 150 dedicated volunteers. "We participated in togetherness, we cheered together, we had moments so silence... I'm seeing faces not necessarily filled with joy, but they're hopeful."

Flint family came from #Cupertino to be part of #bridgetogethergg. Wanted to be involved in a 'unity' event on #InaugurationDay pic.twitter.com/ENBRl1zPX9

"The weather was definitely a factor," Morris admitted, adding that "it probably knocked our numbers down, and with good reason. The conditions were changing quickly: There were spotty showers earlier but it's been clear for the last 90 minutes though. It was cold, but we stayed positive."

Morris, who has lived in San Francisco since 1999, considers himself a product of the City through institutions like SF State and Golden Gate University Law School. He's a bicycle commuter who frequently rides across the bridge. "It's not everywhere in the world you can organize something like this," he says.

Describing the view as he prepared to leave the bridge, Morris conveyed "an epic scene: High puffy clouds, sunshine over San Francisco, and over the bay channel itself the sky is open. You can see Angel Island, Tiburon, and Belvedere beyond." In the future, Morris hopes to work on more unifying events and moments, capitalizing on the network built for today's demonstration.

Meanwhile, more disruptive protests also occurred this morning, these at the Caltrain commuter rail station near downtown SF. Another chain of people, more literally bound together with actual chain link, blocked tracks and closed train traffic in both directions just after 8:30 a.m. according to the Chronicle. A reporter on the ground claims 11 protesters have been arrested.

Second dispersal order issued at Caltrains tracks in #SF. Protestors tells me they're still deciding whether to move #InaugurationDay pic.twitter.com/2onl5A7Ind

11 arrested and being taken to Northern Station in SF pic.twitter.com/20Hq7wbyCE

The latest in the Lefty O'Doul's saga, following a lawsuit filed Tuesday in San Francisco Superior Court, is that landlord Jon Handlery has now produced a letter from 2001 that his reps say