Giants great Willie McCovey had a spotless record on the field — 521 home runs, 231 of them in Candlestick Park — and now he can say the same of his record off it. The 79 year old Hall of Famer was pardoned by Barack Obama just days before he leaves office, the Associated Press reports, absolving McCovey regarding a 1995 conviction for tax evasion, although a presidential pardon does not expunge the record of a conviction or convey innocence.

McCovey— a.k.a. "Mac," a.k.a. "Big Mac," a.k.a. "Stretch," — was born in Mobile, Alabama and played most of his career with the Giants. Between 1959 and 1980, the first basemen and power hitter spent 19 seasons with the team, and three others with the Oakland A's and the San Diego Padres. Currently a senior advisor to the Giants, McCovey is immortalized at AT&T Park in "McCovey Cove," the body of water behind the stadium where some fans wait, floating in kayaks and boats, for home-run balls to splash down. See, below, his statue there: 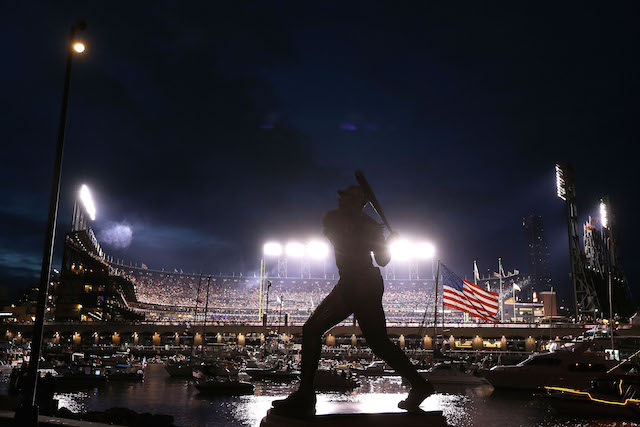 As Deadspin recalls, in 1995, McCovey was convicted of tax evasion relating to $70,000 he'd made signing autographs and participating in sports memorabilia conventions. McCovey received two years probation and a $5,000 fine.

But as the aptly named Giants blog the McCovey Chronicles asks, "If the probation is over and the fine isn’t coming back, what’s the point of a presidential pardon?"

Quoting the government, they attempt an answer: "A pardon is an expression of the President’s forgiveness and ordinarily is granted in recognition of the applicant’s acceptance of responsibility for the crime and established good conduct for a significant period of time after conviction or completion of sentence."

So it's just that, a gesture of recognition, and it's in keeping with McCovey's admission of guilt and apologies. “It’s one of those things that was overlooked at the time and I do accept responsibility for it,” McCovey told a US District Judge at the time of the case. “The only thing I’d like to say is while I’ve always tried to do the right things, I have never willingly tried to cheat the government."

In a statement regarding the pardon obtained by the LA Times, McCovey said "I want to express my sincere gratitude to President Obama not only for this kind gesture on my behalf, but also for his tireless service to all Americans... He will be deeply missed and I wish him all the best in the future."

A statue of McCovey near his namesake cove as seen in 2012. Photo: Getty Images.

Just as San Francisco bears down for the anti-immigration agenda of the coming Trump Administration, lauding and reaffirming its Sanctuary City policy, a man who was detained in 2015 by SFPD after reporting

Three people were injured in San Francisco Friday, when a driver struck them as they crossed the street. According to the San Francsico Police Department, a 70-year-old woman walking with a 7-year-old boy