As soon as she heard about the Women's March on Washington, Martha Shaughnessy, who has lived in San Francisco almost her whole life, bought a ticket to fly to the nation's capital. She soon thought better of that plan, expressing to SFist her desire to "connect locally in a community that is very active and progressive, but not necessarily all as one."

On January 21st, the Saturday after next and the day after the inauguration of President Trump, Shaughnessy will be marching in San Francisco as others do the same in Oakland and San Jose, and she hopes that people of all genders who support women's rights will join her.

To Shaughnessy, who is running communications for the Bay Area's network of aptly termed "Sister Marches," unifying locally is much the point. "I think San Francisco has its own distinct opportunity, and almost imperative, to show how beautiful and powerful plurality is," she says. Here, "people want to mourn, to heal, and to connect." Last, by dint of its timing, the SF march will be the capstone of the day. "Ours is an evening, candlelit vigil march, which will follow all the rest of the marches around the country," Shaughnessy explains.

Renee McKenna, the lead organizer for the San Francisco march, adds that "The experience of coming together in community is a very inspiring and nourishing experience. I think there can be a sense of hopelessness that people are feeling, and my experience is that we all have a part to play in what happens, and the women's march is giving people an opportunity to take an active role in that."

The march on the 21st begins with a 3 p.m. rally at Civic Center, then concludes with a march from 5 to 8 p.m. down Market Street to Justin Herman Plaza. There are, of course, no tickets required, but those intending to join can RSVP on Eventbrite or mark themselves as going on Facebook.

Speakers and performers for the rally have just been announced, and those include District 6 Supervisor Jane Kim; Hung Liu, the well-known painter and Oaklander who grew up in China under the Maoist regime; Ameena Jandali, a founding member of Islamic Networks Group (ING); and more. Musicians include the San Francisco born and raised MicahTron, a featured MC of HipHopForChange.

The Bay Area marches are entirely volunteer-run, and most of the team organizing them have experience in civic and tech work. More volunteers are welcome and can sign up online. Still others are pitching in by hosting events in preparation, such as a DIY sign-making event at WorkshopSF (1798 McAllister) this Sunday, the 15th, from 3 to 7 p.m. 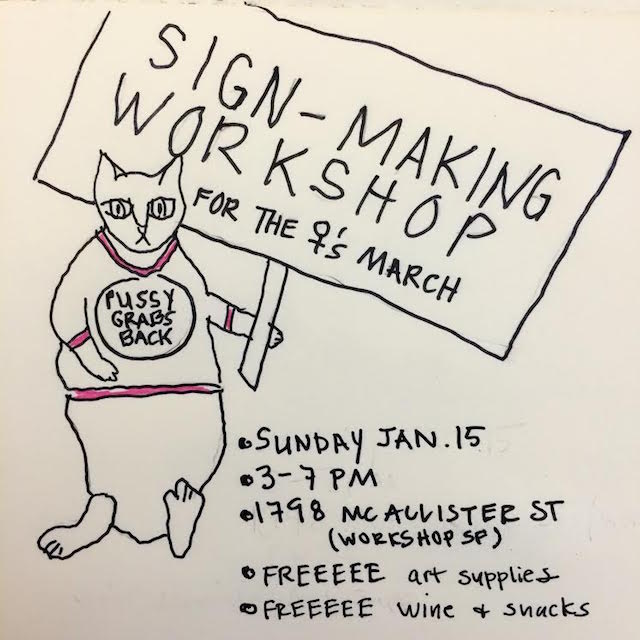 The Women's March won't be one thing to all marchers, and it's not, at least specifically, a protest, or it isn't in Shaughnessy's mind. "It's not on Inauguration Day," she clarifies, "and it's not a protest of the inauguration as much of a showing of solidarity among many different groups — women's rights groups, immigrants' rights groups, environmental issues groups. We're working together to create a cohesive, powerful showing... we're showcasing the values that we're standing for, and one of the hopes for me personally is that we're forging connection and operational savvy for whatever comes next."

If you've ever gotten coffee at Andytown or picked up a print at Three Fish Studios, you've already taken in Peter Cochrane's work: He does the weird and wonderful floral arrangements you see

The San Francisco Board of Education has a fresh set of leaders to guide it as it selects the next superintendent of public schools. [SF Examiner] SF startup gathers nation’s Medicaid data