Do you still have your original first-generation iPhone, just for the sake of tech nostalgia? They're so cute and tiny, right? Today in history, January 9, 2007, Steve Jobs stepped out onto the stage at MacWorld in San Francisco and unveiled the very first touchscreen smartphone (that's a link to SFist's vintage post on the unveiling). As Wired recounts wistfully, Apple was just a wee $70 billion company at the time, having conquered the laptop computing market and introduced the world to mp3 music-listening, basically, with the iPod. But it's the iPhone that has, largely, helped Apple become a $640 billion company (as of now), clocking a corporate record-breaking profit of $18 billion in 2014.

The New York Times, the following day, called Apples's "innovate cellphone" "a gamble on a new business for Apple," and said it "will not be for everyone," noting its $500-$600 pricetag and the fact that it was only launching with Cingular Wireless coverage  and Cingular would quickly become AT&T Mobility later that same month.

10 years ago today, the iPhone was introduced by Steve Jobs. 📱 pic.twitter.com/IfVQo9TdMi

Buzz would build steadily around the iPhone before the first models came to market in June 2007, bolstered by ads like the one below, which debuted during the Academy Awards about a month after Jobs's big reveal.

But as the Times Magazine would later report, in this 2013 piece, Jobs was indeed taking a huge gamble when he made that big reveal, having figured out very little about how the phones would be manufactured, or whether they were even going to work right at all:

It’s hard to overstate the gamble Jobs took when he decided to unveil the iPhone back in January 2007. Not only was he introducing a new kind of phone — something Apple had never made before — he was doing so with a prototype that barely worked. Even though the iPhone wouldn’t go on sale for another six months, he wanted the world to want one right then. In truth, the list of things that still needed to be done was enormous. A production line had yet to be set up. Only about a hundred iPhones even existed, all of them of varying quality. Some had noticeable gaps between the screen and the plastic edge; others had scuff marks on the screen. And the software that ran the phone was full of bugs.

The iPhone could play a section of a song or a video, but it couldn’t play an entire clip reliably without crashing. It worked fine if you sent an e-mail and then surfed the Web. If you did those things in reverse, however, it might not. Hours of trial and error had helped the iPhone team develop what engineers called “the golden path,” a specific set of tasks, performed in a specific way and order, that made the phone look as if it worked... [also] it often ran out of memory and had to be restarted if made to do more than a handful of tasks at a time. Jobs had a number of demo units onstage with him to manage this problem. If memory ran low on one, he would switch to another while the first was restarted.

By June 2007, somehow, the company was able to roll out those first iPhones in stores, but it was only after a great deal of trial and error, and many prototypes that were rejected. Apple engineers reportedly started with three different early versions of the iPhone between 2005 and 2006, and then they made six working prototypes of the phone that ultimately became the first-generation iPhone, "each with its own set of hardware, software and design tweaks." All that insanity meant that "Some on the team ended up so burned out that they left the company shortly after the first phone hit store shelves."

But as most of us remember, iPhones didn't really feel like the indispensable devices they are now until wi-fi networks began being more commonplace, and with reliable signals, and until the app store was full of the millions of apps now meant to waste our precious time, teach us Bridge, tell us to get more exercise, and let us browse nearby single people for dates and sex.

Always keeping us wanting to give them our money, Apple has gone on to improve upon the iPhone with 12 subsequent upgraded models as well as some lower-cost models like the iPhone 5C and SE, including 2016's iPhone 7 and 7 Plus.

But imagine if the software engineers at the company then still known as Apple Computer had gone with one of the other OS interfaces they were reportedly toying around with, like the one referred to as "Acorn OS" that had a touchscreen clickwheel, and used the same drop-down menu navigation as the first iPods  as shown in the video below, via The Verge.

We can safely say the iPhone would not have been such a huge hit if that's what the screen interface looked like.

Meanwhile, CNet has a slideshow of all the iPhone models through the years, and Gizmodo has this delightful look at what nerds on the internet thought the first iPhone might look like, via their ca. 2006 mock-ups.

This is probably my favorite: 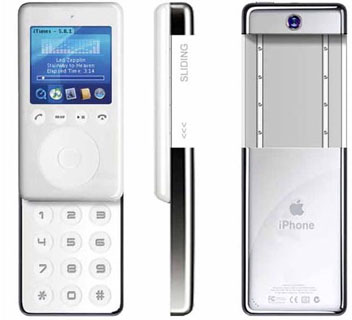 The San Francisco tourism industry, accustomed to recent boom times, is about to shift gears as it prepares for the loss of business generated by the city's largest convention center operation. In April,

Mountain View, California, Google/Alphabet's backyard, is one of several suburban locales where driverless minivans will soon roam free in their natural habitat. In a speech made to a Detroit auto show, the

—
10 Years Ago Today Apple Showed Us The First iPhone, And Steve Jobs's Hastiness Could Have Actually Been A Disaster
Share this