As Uber continued to argue with state regulators last week over its self-driving cars on San Francisco streets, another manufacturer of autonomous vehicles rolled onto the scene. Executives with Waymo, a company which began as the Google self-driving car project, on December 13 announced its formation and over the weekend unveiled a first look at the autonomous Chrysler Pacifica Hybrid minivans which it promises to have cruising public roads as soon as next year.

The minivans share some characteristics with Uber's self-driving Volvo SUVs, namely the black sensor perched atop the vehicles. Also in common is the fact that as Waymo is no longer a part of Alphabet's X's division, much like Uber's self-driving vehicle program it will eventually need to start making money. Krafcik sees plenty of opportunities for that down the line. "We can see our technology being useful in personal vehicles, ridesharing, logistics, or solving last mile problems for public transport," he explained. "In the long term, self-driving technology could be useful in ways the world has yet to imagine, creating many new types of products, jobs, and services." 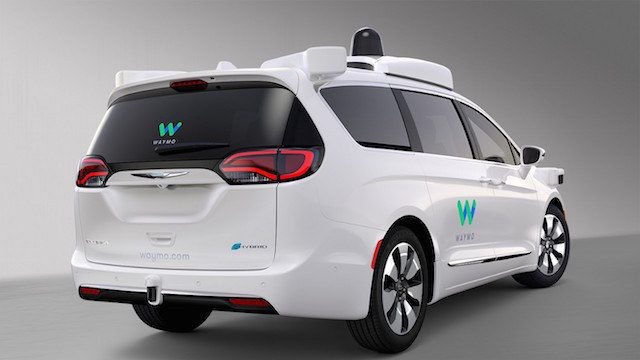 Krafcik wrote of one such use case that the company (still part of X at the time) demonstrated in October of 2015. "Steve Mahan rode alone in one of our prototype vehicles, cruising through Austin’s suburbs," he explained. "Steve is legally blind, so our sensors and software were his chauffeur. His route reflected the way millions of people could use a self-driving car in everyday life: riding from a park to a doctor’s office and through typical neighborhoods."

This trip was completed with no one else in the vehicle to monitor its progress, which marked a milestone for the autonomous-car industry. The car that Mahan rode in was likely not the minivan pictured above, as that Chrysler has only come to life over the past six months — with actual production having begun in October of this year.

Fiat Chrysler has licensed the technology for 100 of the self-driving minivans, and while the terms of that deal remain undisclosed, the timeline for their deployment on public roads is slightly less hazy. "We’re looking forward to having these new vehicles on public roads in 2017," says Krafcik.

We assume that, unlike Uber, Waymo intends to secure the necessary permits first.

Its populations originally decimated in San Francisco Bay during the Gold Rush and the consequent pillaging of every local source of food (more about that here), the Olympia oyster  the West Coast's only