Today tips off a Tulip mania the likes of which the Bay Area ticket market has never seen. Tickets for the runaway smash hit musical Hamilton went on sale to the general public at 10 a.m. today, after a pre-sale last week that sold out with more than 60,000 disappointed would-be buyers still waiting in the queue. Determined to avoid that fate, devoted fans of the hip-hop historical musical lined up with their folding chairs, yoga mats, and tiny tents to camp overnight last night outside the Orpheum Theatre in hopes of getting the box office tickets. SFist kept an eye on the process, with the line beginning to form at Noon on Sunday and growing to about 70 people as of 1 a.m. this morning. 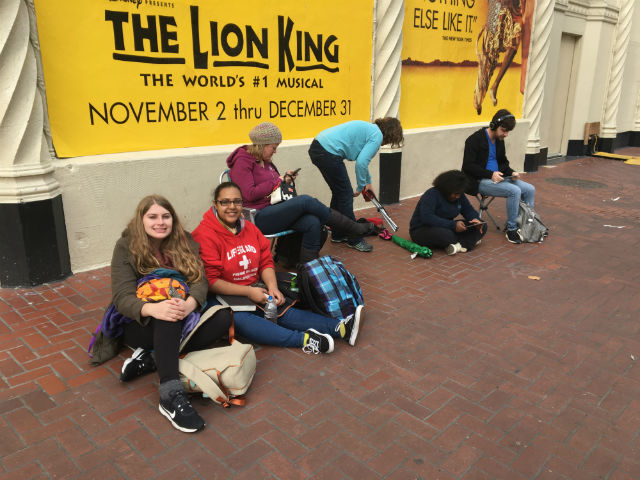 The very first Hamilton fan in line was Loti Bowman, an SF State student from Sacramento who grabbed her spot at approximately noon on Sunday. “It’s Hamilton! It’s supposedly the best Broadway play ever.” she told SFist. Ms. Bowman had tried unsuccessfully to buy tickets in last Monday’s presale. “I was 68,000th in line,” But she was first in line for this morning’s box office sale, and dug in for what will constitute a 22-hour wait until the box office opens.

The third spot in line was occupied by Jill R. Feng Shui, who had the good sense to pitch a tiny two-person tent. “I support the arts and I love plays and Broadway,” she said. "Specifically in this time and era, what we’re in.”

With a nearly 22-hour wait, one has to wonder how these people went to the bathroom “There’s a porta-potty down there,” said the No. 2 person in line Majestic Rodriguez, pointing down Market Street. “And there’s the Burger King and Carl’s Jr. so you can use that too.” 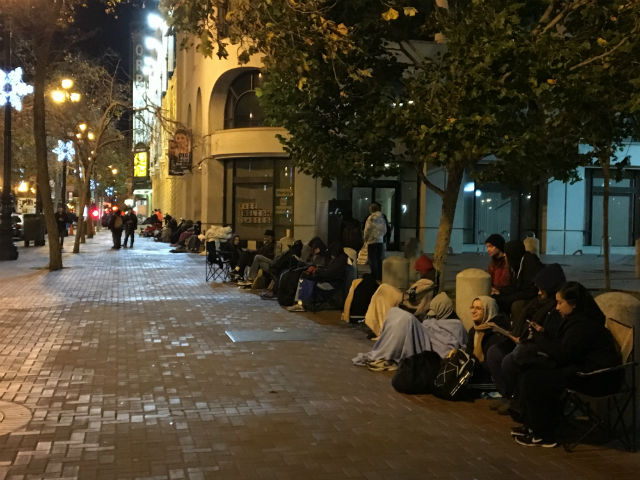 As the evening wore on past midnight, a number of genuinely homeless street campers joined the line to take advantage of a safe outdoor sleeping location with security staff on hand. “I’ve seen a lot of freaky people,” said one Hamilton camper-out who declined to give his name. “They’re not bad, it’s just a little chilly out here,”

As of press time, we still don’t even know whether these people got their Hamilton tickets. As with Hamilton online ticket sales, the box office will not begin selling tickets until 10 a.m. today.

Update: From the looks of the SHN SF video embedded below, it would appear that the line was substantially longer than 70 people when the box office opened this morning.

The ppl in line at the SHN Orpheum Theatre this morning are not throwing away their shot! @hamiltonmusical tix go on sale at 10am! #Hamilton pic.twitter.com/9D44CJkDNJ

Note: SHN SF is an occasional SFist advertiser, but this was not a sponsored post or directed in any way by the advertiser.

It seemed marginally possible last month that Twitter might not unilaterally suck at curbing hatred and abuse on its platform when it banned the accounts of several major "alt-right" trolls. Among the group