In the seven days since the tragic inferno at Oakland artist enclave called Ghost Ship, some of the expected finger-pointing has been aimed at the city and its inspections apparatus, and some has been aimed at the overall affordability crisis in the Bay Area and the lack of adequate, safe spaces for artists to live and work. But the bulk of the blame has fallen on the couple who built out the space with little apparent regard for safety, even that of their own children, all while collecting rent from artist tenants and collecting venue rental fees from promoters like the record label that was throwing last Friday's party. Derick Ion Almena ahas been excoriated by both friends and strangers on social media and the internet, both before and after he gave his only extended public interviews to NBC News and the Today show, and now the Chronicle has spoken to multiple people who have known him and wife Micah Allison over the last two decades  a couple of whom remain sympathetic defenders, but a number of whom paint a picture of an arguably cult-y, charismatic manipulator with a "dark" side that may have grown darker in recent years.

Neither Almena nor Allison appear to have been making a living in the arts, with Almena formerly practicing photography and describing himself lately as a "realms creator," with the Ghost Ship space his primary piece of work, apparently begun in 2013. Allison apparently "danced, taught archery and 'created art through everything she touched,'" according to one friend speaking to the Chronicle, but it does not appear she necessarily made any art. There is anecdotal evidence to suggest that the couple's primary source of income was the rent they collected from subtenants in the space, which reportedly would range from $500 to $1000 per month. 14 people reportedly resided in the space at the time of the fire, only one of whom died in the blaze, 38-year-old Peter Wadsworth.

Almena has not lost all support from his friends and artist tenants despite some well publicized outcries and attacks. TMZ reported on a Wednesday dinner Almena and Allison shared with some of the other artists who lived in the Ghost Ship space at a Denny's in Oakland, and which was comped by the restaurant. And friend Zippy Lomax, a fellow photographer who says she was a great admirer of Almena's work and has known him for twenty years, wrote this blog post earlier this week advocating for compassion. "Regardless what his track-record has been... he is still a human being, however lost we may have believed him to be," she writes. "As a community, I believe we abandoned him long ago. We chose to stand disapprovingly at the edges, to judge his conduct from the sidelines, without daring to face the deeper issues that seeded his unfavorable demeanor.”

She and another friend of Almena and Allison's who commented on that post speak vaguely of these "deeper issues" without being specific. Striking an angrier tone, a woman named Ariana writes, "I did my best in trying to save [Derick and Micah] from themselves, which was entirely what it was. Micah only wanted the help if Derick wanted the help and he was in complete denial that there was a even problem." And she suggests that she was retaliated against by her former friends after some attempt to intervene in their lives. "I was not only blamed, I was threatened," she says, "My family was threatened and he made up stories that people genuinely considered possible, he has done wrong by so many people, that is blunt truth. D had his swords out against the world, it was him vs everyone, even those who wanted to help." 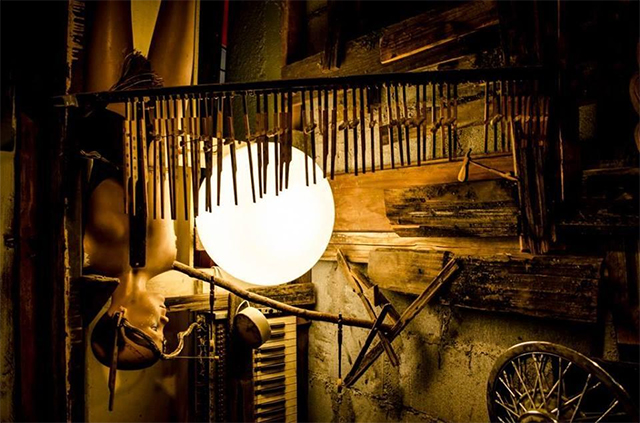 Ariana also considers Almena "a spiritual person," but former tenant Shelly Mack, who's been one of the most vicious critics of Almena speaking to at least a dozen media outlets in the last week, tells the Chronicle, "He was always selling this bullshit spirituality. That’s his schtick." Indeed the Ghost Ship space was decorated with an eclectic mix of objects from various spiritual traditions, including Balinese statues, Hindu swastikas, and painted skulls a la Dia de los Muertos.

Friend Isa Shisa tells the Chronicle, "Derick, as erratic as he is, is not some monster."

But what the hell did Almena mean when, this past summer, he posted to Facebook, "I am the thriller love child of Manson, Pol Pot and Hitler"? He was perhaps referring to past or recent drug use and mandatory drug testing by Child Protective Services when he wrote, "Addictions never admitted armed me as revolutionary as long as i seek help and healing, have current registration, pay my insurance, piss in a cup twice weekly  i can proverbally (sic) get away with murder."

It's one of multiple "dark and erratic" updates he posted, according to Lomax, and maybe we can read between the lines here about what contributed to this growing darkness.

The Chronicle makes no mention of addiction being an issue, but Allison's father, Almena's father-in-law, spoke to the Associated Press on Monday and made mention of methamphetamine, crack, and heroin use by the couple. "Honestly, I don’t think he is capable of feeling any kind of remorse or guilt,” said Michael Allison of Portland, Oregon. “I’ve never seen him ever really care about anyone else." Allison added, perhaps referring to Almena's influence on his daughter, "[Almena] was able to cast a spell on someone in a weird way that I just do not understand."

Another old friend of Micah Allison refers to Almena in the Chronicle as having "a dark, dirty vibe about him," and said he worried that Almena dominated Allison and ruled her life.
"He attracts people who are weak," this friend said. "He’s a manipulator ... very seductive, silver-tongued."

These character analyses are ultimately moot, however  no one is arguing that Almena set out to intentionally harm people, and that is the implication of much of this talk. Discussion of this being a "commune" or "cult" ring false too  these were just die-hard Burners with a clichéd fetish for Eastern religions and an adolescent attitude toward safety.

There is, though, perhaps something to be gleaned from understanding how great harm resulted from one man's stubbornness, or the blind irresponsibility of his creative vision, and a community of friends and admirers who failed to do anything proactive about it  except to call Child Protective Services  when they recognized danger.


A recent photo inside the Ghost Ship by Micah Allison, posted to Facebook.

Thursday marked the ceremonial groundbreaking for Oceanwide Center, a complex of two towers and some smaller buildings, the tallest being 910 feet tall, at First and Mission Streets. Designed by London-based Foster + Partners