Wait, did I use that right? According to the meme dictionary website Know Your Meme, "Yiff" is a term among furries — a subculture/fandom of people who claim identities as cuddly, sometimes sexy animals — that means an "exuberant hello."

Oh, wait, just read a bit further down: "Yiff" can describe a sex act. Hmm. But that meaning apparently eluded the censors at the CA DMV: 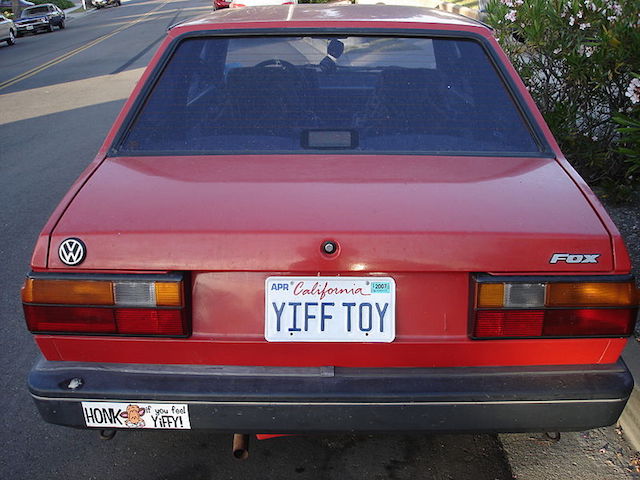 "Yiff" aside, the DMV saw fit to recently reject a request for a more on-the-nose furry license plate, which was to read "FURRIES."

That's according to intrepid chronicler of the furry life the Dogpatch Press: The request came from reader and furry person Pup Nacho, a San Francisco resident according to their Twitter account. Their bio: "I like belly rubs & treats, bondage and furries! 18+."

As Pup Nacho wrote to the Dogpatch Press, "This is super frustrating to me, and I’m kind of baffled that furries would be categorized as a sexual connotation or act of depravity. I really don’t like our state defining the fandom in that way. - Licks and Wags, Nacho!”

To borrow a phrase from the furry haters: "Yiff in hell, DMV!"

"For all the jokes, it’s true, furries doesn’t mean much by itself," the Dogpatch Press explains, critical of the DMV's decision. "I’ll leave it up to readers to wonder how many others have had a similar experience. But I have to call it silly, and say they might as well try to stop us from laughing."

Indeed, as previously noted, other in-group slang has evaded the DMV.

@skotterbutt How is yiff not taken in WA? I don't believe it. I got rrerr for my plate pic.twitter.com/VVsPDvBmaS

In fact, one furry with a "by all means" attitude appears to have grafted together letters from other license plates, ransom note style, to form the perfect furry plate.

WHO THE FUCK IS THIS?!?! pic.twitter.com/5Adifu6PRa

Three pedestrians are recovering Thursday, after they were struck by motorists on San Francisco streets yesterday. In the first such case from Wednesday, two pedestrians were rushed to San Francisco General Hospital at