San Francisco's most photogenic park — Alamo Square, with its downtown views foregrounded by the picturesque Painted Ladies — hasn't been quite itself since May. That's when renovations to the park's "antiquated" irrigation system and an update to its bathrooms necessitated a full closure for a $4.3 million renovation.

But these days, as passersby have lately observed, the park is starting to recapture its former, verdant glory. Sod has been laid, and Brett Desmarais, the project manager for the Alamo Square Restroom and Irrigation Upgrade Project, wrote this week to offer a schedule update and information about the park's so-called "phased reopening."

"Completion of the lawn installation is a major project milestone that now offers a more definitive picture of the project schedule," Desmarais wrote. "As of mid-November we are anticipating that the new viewing area will open shortly after the New Year at the same time that the original viewing area closes."

The current, temporary viewing area for Instagram-crazed tourists was delineated after over-eager photographers kept muscling their way into the fenced-off park, necessitating an intervention by Supervisor London Breed. That viewing area will be replaced with a new one as soon as January 3rd. 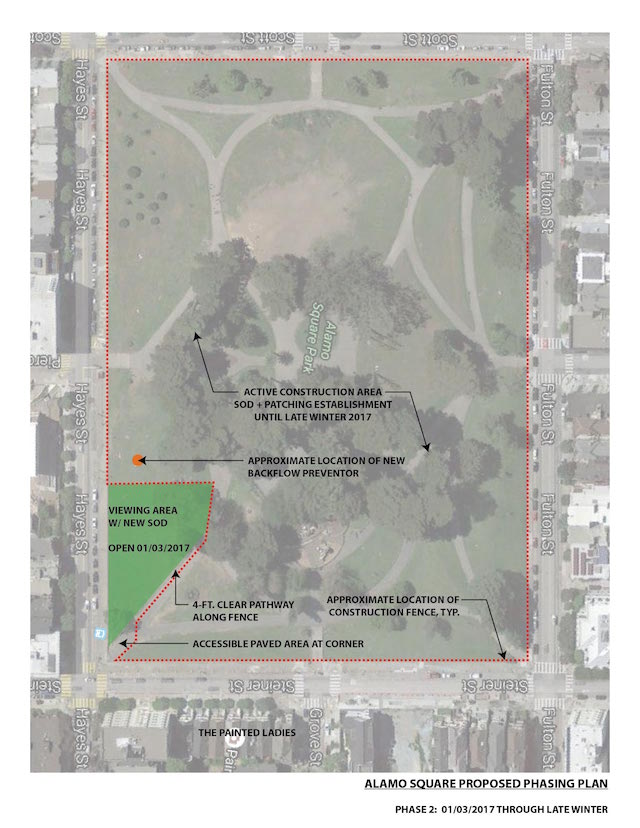 October rains, we're told, delayed the sodding process, slightly pushing back the park's final opening, originally set for February. "The remainder of work within the the park, which includes pathway and drainage repairs, the additional planting of natives trees and shrubs, and the completion of the new accessible restroom, will occur between now and late January," Desmarais elaborates.

"It is anticipated that the park will open in late winter, with the exception of the original viewing area, which will remain closed for lawn establishment until spring 2017. 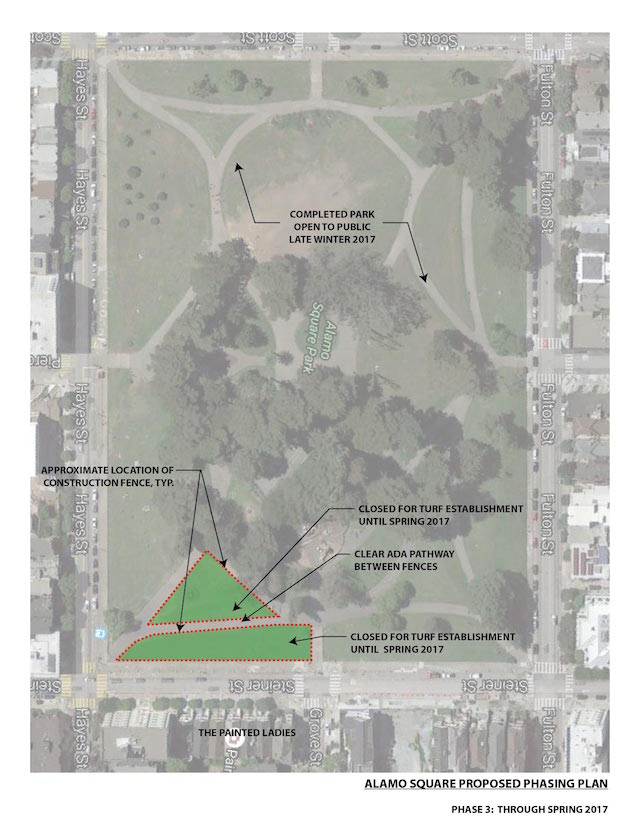 via Rec and Parks

In October, the Alamo Square Neighborhood Association funded the donation of 45 new trees which were planted in the park. Those were Monterey Cyprus, New Zealand Christmas Trees, and Holly Oaks. "These species are well-adapted to limited water availability, fog, and wind, and are expected to thrive at this location," Desmerais wrote last month. Planting these trees is also an important step in ensuring that the park’s tree canopy continues to grow as many of its mature trees approach the end of their natural lifespan over the next several decades."


Related: Alamo Square Was Once 'A Primeval Forest Of Rocks' Fought Over By Land-Grabbers

via Rec and Parks

Weeks after two of the suspects in a 2014 slaying of a disabled homeless man were arrested, a third person has been taken into custody in the violent and disturbing case. As previously

We learned last month of a skirmish occurring as a massive condo and hotel development at 950 Market Street is heading for its final approvals, due to the presence of several buildings that