This year’s election has not yet even taken place yet, but we already have a chorus conspiracy theories claiming that the process will be rigged and a presidential candidate who’s threatening to not accept the election’s results. The roster of most frequently bandied-about voter fraud theories includes illegal immigrants voting, people voting “eight and ten times” in “the inner cities”, and even secret collusion with the Russians to hack voting machines.

“Child’s play!” chortles the City and County of San Francisco, while throwing uncounted ballots into the ocean, calculating the votes of dead people, and air-dropping Ron Conway election guides about town via Airbnb-branded drone delivery. San Francisco is not quite on the corruption echelon of Chicago, New Orleans, and New York, but we’ve certainly got a colorful history of Election Day chicanery spanning the last few decades. 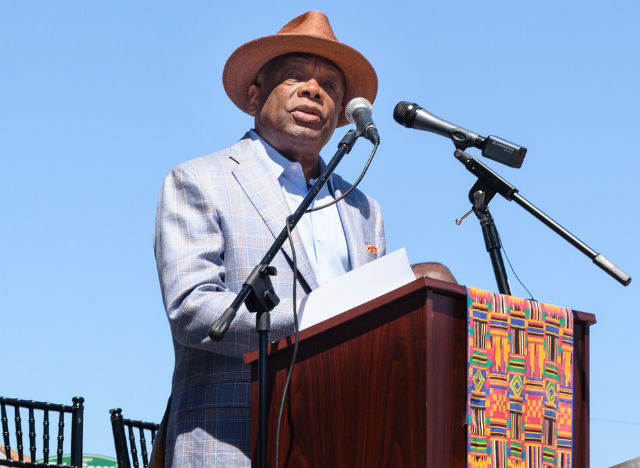 “Every election I’ve ever participated in has included a suspicion of shady doings,” Willie Brown wrote in the Chronicle this weekend, with words that surprise absolutely no one. Brown’s Sunday column is an interesting read, harkening back to the ‘good old days’ when free meals and bus rides were considered fair-play voter turnout efforts. But a few vote fraud scandals stand out, as San Francisco history shows a regular pattern of election irregularities. 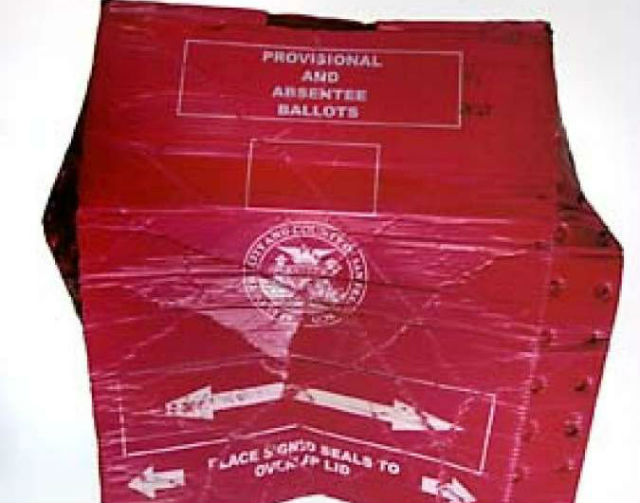 Ballot Boxes In The Bay (2001)
Who could forget the infamous “ballot boxes in the Bay” incident off 2001? The above image of a San Francisco ballot box lid comes from artists Judith Selby Lang and Richard Lang of Marin County, who found the lid while combing Kehoe Beach in 2001. Ballot box lids were found floating in the San Francisco Bay at 7 different spots following the 2001 election. At the time, the SF Elections Department insisted that though “they made a regrettable error in accidentally letting the lids wash into the bay, no ballots were ever endangered” according to the Chronicle.

Similarly in 2010, a poll worker stole 75 ballots plus a voter roster and a ballot machine access key. The ballots were recovered from a lagoon at the Palace of Fine Arts.

I See Dead People Voting (2012, But Probably Every Year)
The phenomenon of votes being cast in the name of dead people is not just a San Francisco thing, and SF stacks up pretty well at preventing this relative to the other most populous California counties. A 2012 NBC Bay Area investigation found 25,000 dead people still on the California voter rolls, with 365 in San Francisco alone. That sounds like a lot! But that’s just the overlap of dead people with existing, non-updated voter rolls. It doesn’t contain much evidence that real votes were actively cast in the deceased people’s names. The NBC Bay Area analysis found “nearly a dozen cases of potential voter fraud” out of those 25,000 dead people whose names remained on voter rolls. In other words, dead people are indeed voting in California — in about .00048% of the cases in which their names remain on the rolls.

Asshole Trump surrogate Rudy Guiliani recently said on CNN that "dead people generally vote for Democrats rather than Republicans." But there is no evidence that this .00048% of dead peoples’ votes tends to skew to the Democratic party. Existing evidence from a Los Angeles County analysis of real votes cast in dead peoples’ names found that “86 were registered Republicans, 146 were Democrats”. We have no idea how these stiffs’ votes were actually cast, but that party identification sample is consistent with Los Angeles County party registration. 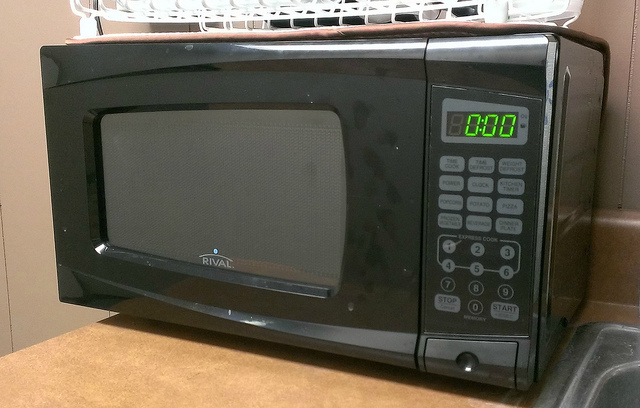 There was a terrible rainstorm the night of the 1997 San Francisco election. “In order to get [the ballots] dry, they were sticking them in the little office microwave at the Department of Elections, and actually cooking the ballots,” political consultant Jim Ross told The Examiner. 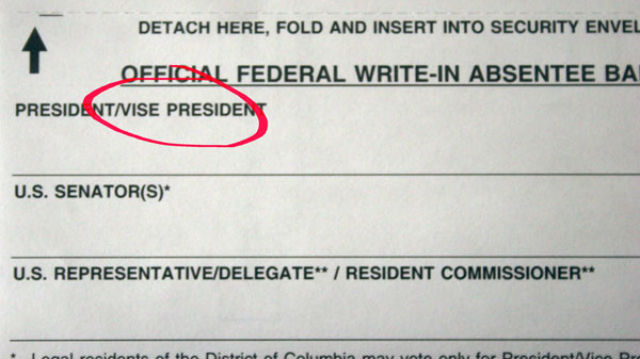 Incorrect Absentee Ballots (2016, 1995)
Roughly 1,400 registered Democratic voters were sent the wrong absentee ballot for this past June’s primary, a snafu caught by the SF Examiner. Similarly, the Chronicle reports that in 1995 “Thousands of people who requested absentee ballots got the wrong ballots and voting books in a hotly contested [Willie Brown vs. Frank Jordan] mayoral election. The Department of Elections scrambled to send out the right information.” 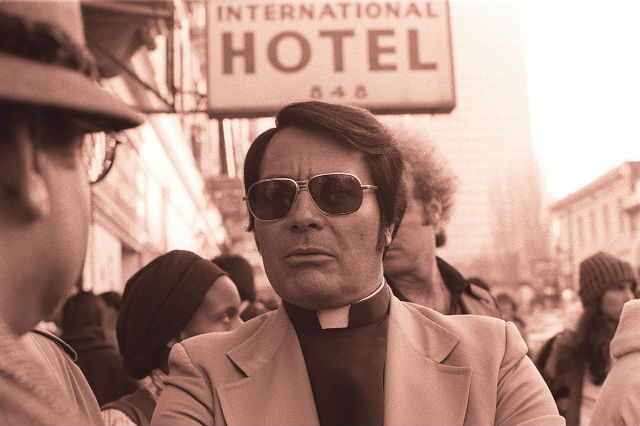 Jim Jones Busing In Out-Of-Town Voters (1975)
The “Donald Trump of his era” Rev. Jim Jones was alleged to have bused in hundreds of non-San Franciscans in 1975 to help his political allies George Moscone, Joseph Freitas, Harvey Milk, and — who’d have guessed? — state assemblyman Willie Brown win their local elections. “When Jones wanted someone elected, he got them elected," ex-People’s Temple member Wanda Johnson told the New York Times in 1978, though the Times also notes that “some of the candidates Mr. Jones backed were defeated.” 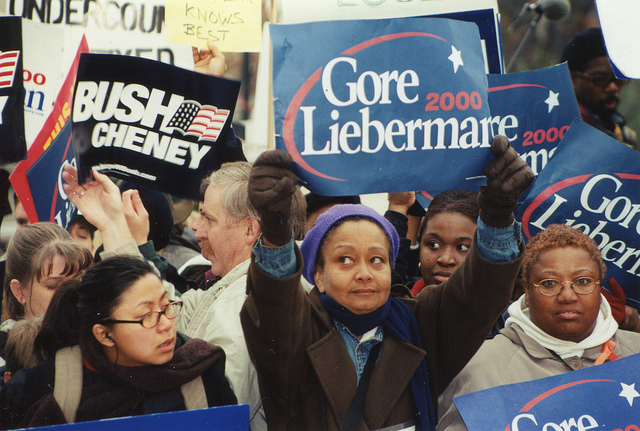 Recanvas of 324,000 Votes (2000)
San Francisco had its own fucked-up footnote to the infamously contested Bush-Gore election of 2000. The-Secretary of State Bill Jones found “significant and substantial irregularities” in every single San Francisco precinct that year, and the LA Times noted that he “stopped short of calling the discrepancies fraud, but described them as the most serious he has ever seen." A runoff election was called to recanvas 324,000 votes. 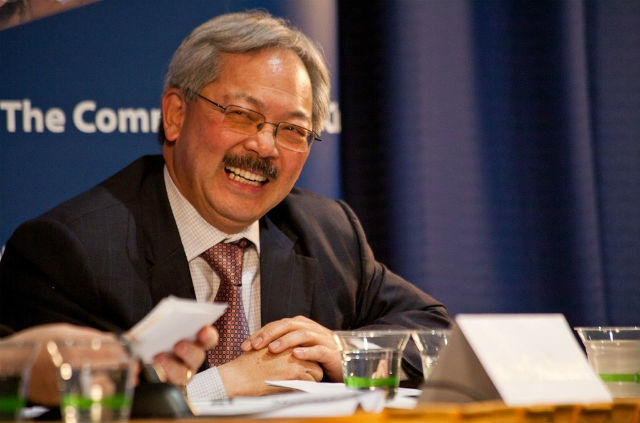 Chinatown Vote Fraud in Both of Mayor Lee's Wins (2011, 2015)
Ed Lee’s election as mayor in 2011 was marred by allegations that elderly voters were having their absentee ballots filled out for them by poll workers at a Chinatown voting station. The exact same allegation popped up in 2015, though on neither occasion was malfeasance proven.

And as discussed yesterday, Mayor Lee’s name has been floated as a possible cabinet pick should Hillary Clinton with the presidency of the United States.

Following up on a National Bureau of Economic Research report released last month which found that Uber and Lyft drivers in Seattle and Boston discriminated against passengers with African American-sounding names, Senator Al

Vile and sexually harassing remarks made by UC regent aren't against the rules, UC says. [SF Chronicle] Mount Sutro site approved for 29 luxury homes could be yours. [SocketSite] Ten years later, the