Last we checked — just a few weeks back — Nick Balla and Cortney Burns, who have run Bar Tartine for more than five years, were still in the process of buying the restaurant from Tartine Bakery. That plan was put into action in April of 2015 when Tartine and Blue Bottle announced a crazy merger that fell through by December. In the meantime, though, Balla and Burns had readied to rechristen Bar Tartine Crescent and to buy the restaurant.

That's not happening — they're going to take Crescent, and their talents, elsewhere, leaving the Tartine Bakery team to do something with the prime Valencia Street real estate that Balla and Burns have made a destination. Inside Scoop broke the story, indicating that Bar Tartine as we know it will close on December 31. 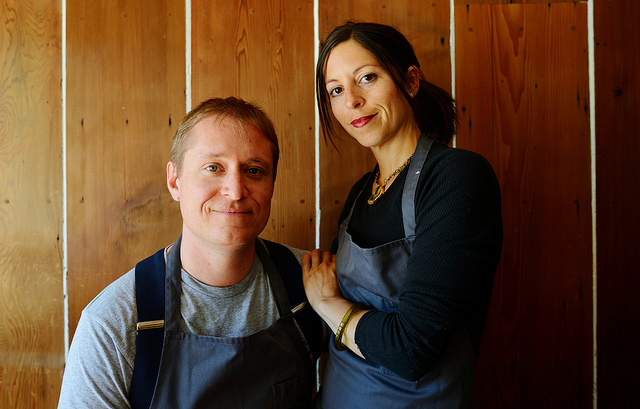 This August we heard that Balla and Burns would test a pop up Japanese-influenced concept called Motze, and so far you can try Motze fare at prix fixe dinners at Bar Tartine on Monday evenings. Soon enough, perhaps as early as today or tomorrow, you'll be able to get it at the former Herbivore space at 983 Valencia, which they snagged for that purpose this month.

What happened with the Bar Tartine space? "The main thing is just the deal ended up not working out for everybody and we just needed to move it to a different space,” Balla tells Inside Scoop. “At the end of the day, we all just came to the decision that we’ll find another space for Crescent.” Balla and Burns are going to look for a new space in the Mission, preferably. How Motze and Crescent fit together in all of this remains to be seen, and what becomes of the Herbivore space is also a question.

Chad Robertson of Tartine tells Inside Scoop that they'll maintain the Bar Tartine space, though changes will be made. "The good thing is that space is great,” he told Inside Scoop. "The neighborhood’s changed and it’s all different, for better or worse, but it’s a good spot for the right person. We have a lot of options. We’re trying to figure out the best fit for the neighborhood.”

A recent poll conducted by a pro-development organization has found that residents of San Francisco blame the tech industry for the city's high housing costs. The Chronicle reports that the group, Rise SF,

—
Chefs Nick Balla And Cortney Burns Leaving Bar Tartine, Which Closes As We Know It December 31
Share this