The loosely affiliated rabble-rousing group Gay Shame, which has for years postered the city in protest of mainstream LGBT groups and SF Pride, in support of Chelsea Manning, and last year with posters threatening tech employees with violence and mugging, have lately been targeting the Natoma Street offices of two political groups supporting moderate candidates like Scott Wiener in the upcoming election. As the Examiner reports, the offices of Grow SF and YIMBY (Yes In My Back Yard) were vandalized Thursday with Gay Shame's "Queers Hate Techies" stickers and knife marks, and the sidewalk outside was also spray-stenciled with the familiar queer-on-techie hate message.

Grow SF's director Laura Clark turns the conflict into a gendered one, telling the Ex, "This kind of abusive behavior towards women in politics seems to be on the rise. I take my cues from other strong women leaders: When they go low, we go high." Clark also serves as vice-president of the moderate-leaning Robert F. Kennedy Democratic Club.

Gay Shame has facetiously accused Clark, in posters, along with Supervisors Scott Wiener and David Campos (two people who typically don't agree on much), of "standing up for the most marginalized people in SF: white billionaire techies who want a condo in the Mission." It should be noted that there aren't many billionaires in the Mission, and of the few who may want to live there, like Mark Zuckerberg (who's technically on Liberty Hill), they can afford much better than a condo. 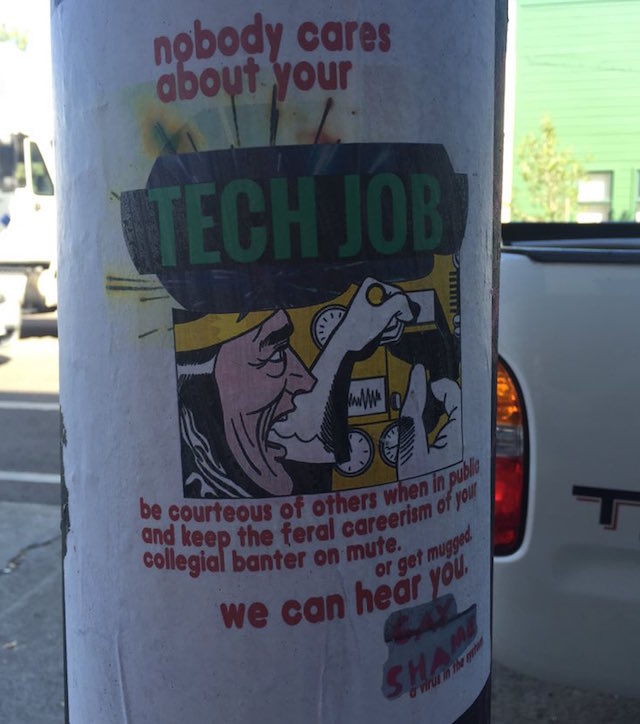 But Gay Shame likes to tarry in extreme, concise, and hyperbolic phrases, and they say on their own Facebook page that they are committed to taking "direct action to astounding levels of theatricality." Obviously it's not news that a San Francisco protest group might be more interested in stirring up emotion and sparking conversation than in being politically effective, but previous efforts by Gay Shame have included signs that declare "Dykes Hate Landlords," "Scott Jails Black Women," and a recent event titled "Scott Wiener Wants Us Dead" which was intended to harass Wiener and his supporters ("his gay-for-pay actors") at a campaign event at Beaux in the Castro. In short, they are keeping alive a tradition of angry, no-holds-barred activism in SF where they feel like even progressive politicians like Jane Kim and Campos don't have their backs. Though their messaging is always a bit muddled.

Many people in the LGBT community have reacted negatively to the "Queers Hate Techies" stencils  especially the many thousands of LGBT people who work in tech  and some counter-graffiti began appearing in June with the response, "Sorry Ur Hurting We Love You!"

I #love this response to the #antitech graffiti that was trying to spread hate in #SF #MissionDistrict pic.twitter.com/jvSiw7StMV

Back in 2014 Gay Shame was partly responsible for organizing a protest of a prison-themed gay dance party during Pride weekend at the Armory at which protesters were arrested, some for possibly using a slingshot to shoot quarters at partygoers in line.

Next up, the group may be showing up to a phone-banking event at SF Grow/YIMBY's offices on November 2, or at least they posted the event to their Facebook page, to which Clark responded, "While you're welcome to stop by and harass me personally anytime, that night there will be volunteer phone bankers for Vote16 and the BART Bond using the space as well. They are mostly teenagers getting involved in local politics for the first time, so try to keep it PG13."

The Booksmith, which rang in its 40th anniversary in July, has more to celebrate this week: It's been granted Legacy Business status and will expand across Haight Street to the former Red Vic

Contrarian that he is, noted libertarian Trump lover Peter Thiel has decided that the controversy surrounding his support for the Republican presidential candidate demands his response. And so, as Bloomberg reports, the billionaire