Amidst the legal and PR kerfuffle they've been dealing with over the last few months regarding the sinking and tilting Millennium Tower, developer Millennium Partners appears to be reconsidering the foundation of their latest project already under construction at 706 Mission Street. The 45-story condo tower, which has been mired in delays since they purchased the property a decade ago, was supposed to have a bowl-shaped concrete slab at its base beneath a four-story garage, but Matier and Ross are now reporting that Millennium Partners has been quietly shifting gears to possibly sinking piles to bedrock, as they've been criticized for not doing with the 58-story Millennium Tower.

Though the developer has not yet publicly said it would drill to bedrock, M&R say Millennium Partners "strongly hinted it was moving in that direction" by conducting some recent test-drilling on the site. And it makes sense that they would strongly consider the bedrock thing since they're looking at commanding some of the highest condo prices in the city, and they know highrise buyers will be wary after this Millennium Tower debacle is over.

Officially, Millennium Partners' spokesperson PJ Johnston says this in response to the Chronicle:


"We decided to install an additional boring in early October to sample and further analyze the existing soil conditions at very low below-grade depths  up to about 300 feet below the surface. Any foundation design elements that are recommended by the 706 Mission St. engineers and consultants, and that we ultimately pursue, must account for the unique soil conditions at this specific site, as would be appropriate for any building anywhere in the city.”

Sources tell M&R that the developer may drill to bedrock this time mostly for appearances, even though this site is several blocks away from the former shoreline and bay mud that Millennium Tower is slowly sinking into.

The 706 Mission project, across the street from Yerba Buena Gardens and next to the Contemporary Jewish Museum, will have in its base The Mexican Museum, which was promised a new permanent home back in the Willie Brown administration but has languished in temporary space at Fort Mason ever since. The museum will also occupy the ten-story historic Aronson Building next door, which is being refurbished as part of this project. 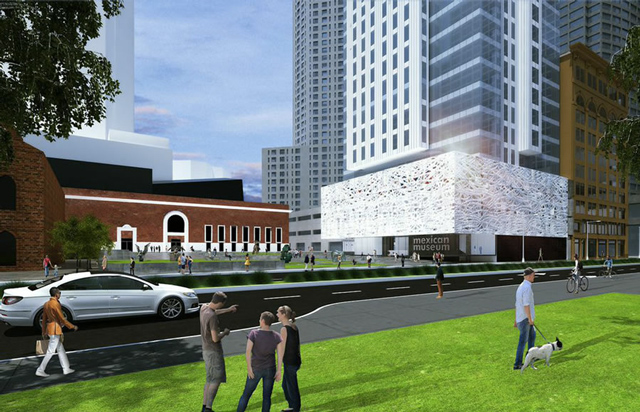 The Mexican Museum entrance at the tower's base. Rendering via Handel Architects / Ten Arquitectos

Another in a long line of SFMTA measures restricting large vehicles from parking overnight on certain San Francisco streets was approved on Tuesday, this time focusing on the Marina. The Examiner reports that

Starting today, all Tesla vehicles produced at the company's Fremont, California factory will have the capacity for fully autonomous driving, though they won't exercise those capabilities until the company makes updates "over the