At 150, Laguna Honda is even older than most of the people living there. The establishment dates to 1866, and to ring in its anniversary this year, volunteers have assembled photographs and artifacts that recall the hospital's rich history of service, which will be celebrated with particular zeal at an event this weekend.

"It all stems from those early Gold Rush days, when San Francisco stepped up to the plate and said hey, 'We do take care of people' and it has continued to this day," former San Francisco supervisor Louise Renne tells ABC7. "Laguna Honda is a publicly owned, publicly funded skilled nursing center," she adds. "We are one of the very few in the country."

Not everyone struck gold during the California Rush: Many were left empty handed and living in abject poverty. The city of San Francisco responded to the situation by building on a site carved from ranch land to the west of Twin Peaks. There, a natural spring fed a deep lagoon — Laguna Honda. The land had previously belonged to José de Noe, who was the last alcalde of San Francisco when it belonged to Mexico. 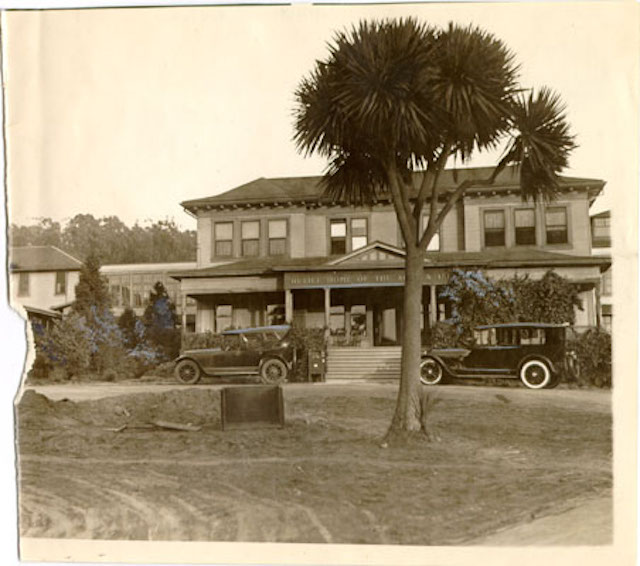 As an almshouse — a catchall home for the poor, ill, and destitute — residents of Laguna Honda grew their own food and tended to their own livestock on 87 acres. By 1870, 500 people lived on the site. In 1868 during a smallpox epidemic, the city began to administer medical services at Laguna Honda, constructing a hospital site later run as a small asylum. In 1906, the earthquake and fires that rocked the city left many stranded and homeless, and the almshouse began housing displaced residents of as a relief home. A pavilion was built to accommodate 1,000 such people and dedicated by Teddy Roosevelt.

In the '20s, under Mayor James “Sunny Jim” Rolph, the current Spanish Revival style architecture for Laguna Honda was established, and in the '30s the site was a teaching center for the University of California Medical School. That era also brought the WPA murals that are a popular site today. While occupational therapy, surgery, and cancer research went on during the '50s, Laguna Honda didn't become an accredited hospital until 1963.

All of that early history, as well as more recent advancements and stories, will be on display in a new room to be unveiled this weekend, where old patient logs, photos, and even medical instruments will tell the site's story. Festivities are to include a ticketed documentary screening: The film, States of Grace, centers on Dr. Grace Dammann, a Laguna Honda physician, and her recovery from a car accident on the Golden Gate Bridge. According to the Bay Area Reporter, Mayor Ed Lee and out Health Director Barbara Garcia will be at the event as well.

Related: A Brief History Of How San Francisco Ended Up With Electric Trolly Buses

This week we saw the debut of Rambler in the Hotel Zeppelin, the shuttering of iconic 48-year-old former gay spot The Lion Pub, and the death of longtime North Beach bar owner Richard

Instacart's "shoppers," a.k.a. independent contractors, forced the grocery-delivery startup to back down on a proposed major change to worker compensation in the face of a planned strike. In a blog post