As the 10th annual Treasure Island Music Festival approaches this weekend, the event's founding fathers from Another Planet Entertainment and Noise Pop find themselves caught between twin instincts to which longtime festival goers will be able to relate. Those are a desire look back on a decade of music on the island, as this year's show will be the last held at the unique location, and the drive to look forward, since the festival will relocate and continue next year.

While no new location has been finalized, Oakland will be on the horizon at this weekend's festival in more ways than one. Organizers announced a last minute change of location on the island itself, with the festival moving from its typical western perch and views of the San Francisco skyline to a point on the island's eastern shore that offers views of Oakland's cityscape instead. The change is due to the massive redevelopment project that will force the festival from the island completely next year, and organizers tell SFist that the symbolism isn't lost on them.

"I will tell you that we are looking both in Oakland and in San Francisco for next year, because the demographic of the Bay Area has changed considerably," Another Planet's Bryan Duquette tells SFist. Founded in 2003 by the former president and CEO of Bill Graham Presents, Another Planet is billed as "the only independent, locally owned and operated full service concert Production Company in the San Francisco Bay Area and Northern California." In 2008, APE helped to reopen the Fox Theater in Oakland where it remains the exclusive promoter. "With what we've done with the Fox, we feel that Oakland might just simply deserve this festival," Durquette went on. "We're strongly considering moving it there. This year, the view is going to be of the East Bay, and we're trying to play the East Bay up this year, but San Francisco is not out of the question." This year also marks the first that shuttles from the East Bay will take festival goers to the island, in addition to those that leave from Civic Center.

Treasure Island is often overshadowed, at least in terms of national recognition, by its younger sibling, Outside Lands Music Festival, also co-founded by Another Planet Entertainment (but not Noise Pop) in 2008. But for Duquette, the two yearly events are complementary. "They serve two different purposes, which is why I've always loved both festivals. But Treasure Island being the first — and more intimate, and more manageable —  will always have a place in my heart. I love spending those two days out at that show: It feels, for lack of a better word, easy. It feels like everyone's in a good mood. It's just smaller, more intimate, and not as consuming."

While Outside Lands now draws about 70,000 attendees per day and lasts for three days, with many stages and complicated, overlapping set times spread across a huge section of Golden Gate Park, Treasure Island allows typically just 15,000 people per day and lasts just two days with no overlapping sets. Those are key features of the festival that its founders hope to maintain. "The A/B stages are the pivotal piece of the festival," Duquette says, "and that's what, to this day, differentiates us from everyone else out there. Everyone has conflicts left and right and you can't see everything." Ultimately that's what makes Treasure Island a communal experience, he says — everyone is at the same show. "With music discovery, people's tastes and preferences have changed so much," Duquette explains, but at Treasure Island, "you're basically forced to discover something. That was always what we were trying to do: We wanted to be tastemakers, and present an environment where artists have the audience's undivided attention."

Kevin Arnold of Noise Pop, another founding member of the Treasure Island fest, considers that ethos to be even more in contrast to typical festivals in 2016 than it was in 2007. "There were definitely already mega festivals in the states a decade ago, but now they're ingrained — these rites-of-passage type [fests] like Bonnaroo, Lollapalooza, and Coachella. They're more and more becoming that standard. When we started Treasure Island, it was supposed to be a boutique alternative to that, which was from Noise Pop's perspective something we strive for in everything we do." Noise Pop, among the nation’s leading independent music promoters, was founded in 1993, predating Another Planet. "Over time," says Arnold, "it's just that Treasure Island has remained that gem of an event." 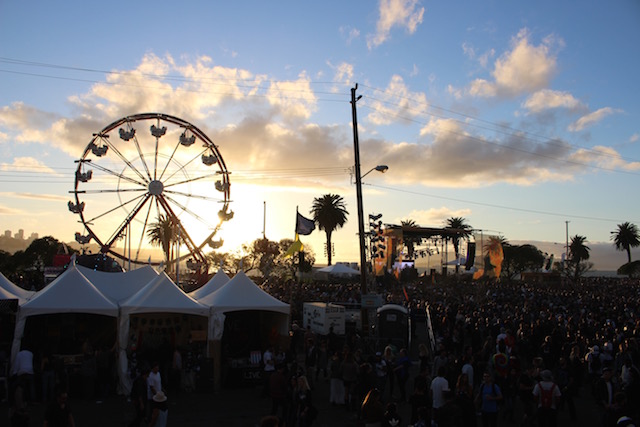 Jordan Kurland, another member of team Noise Pop and a Treasure Island co-founder, admits that moving will be difficult. In fact, it already has been. "I would be lying if I said we weren't somewhat disappointed that we have to move off the west lawn [this year]," he confides. "But for as long as we've lived in San Francisco, we've known Treasure Island would be developed." Change is particularly hard when you've worked to establish such a strong reputation. In fact, that leaves Kurland to speculate regarding another aspect of the festival that may remain: Its name. "I think that's gonna really depend on where the festival goes. But ideally we'd like to keep the name because we spent ten years developing this brand."

On Treasure Island this weekend, posters from throughout the festival's 10 years will greet attendees as they arrive, all featuring original design by Jason Munn (some things don't never change). Along with this year's lineup, Duquette, Arnold, Kurland, and other longtime festival-goers are also likely to hear far-off sounds from cherished act of years gone by. Speaking to SFist, they recalled favorite moments like MIA climbing on the rafters in 2007, Beck finding his stride as a headliner in 2013, and LCD Soundsystem building to their beloved climaxes (before they broke up and got back together again).

There are more personal moments, too. "My now ex-wife was pregnant during the first Treasure Island," Kurland explains, and a photographer from the festival has taken their son's picture there every year since. They always take the Ferris wheel, which this year will spin back and forth along the eastern pier on Clipper Cove, providing views in all directions. See you there this weekend, and until then, here's a playlist:

Previously: 2016 Treasure Island Music Festival Relocating Shows To Other Side Of Island

Since about 2011, Oakland's Frank H. Ogawa Plaza has been identified by activists and protesters from the Occupy and Black Lives Matter movements as Oscar Grant Plaza to commemorate the 22-year-old from Hayward

Zakir Hussain is the picture boy for the tabla. Literally, he's one of the images on the Wikipedia page for this Indian percussion instrument. As music has gone global, so has he, performing